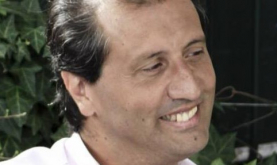 Alejandro Parra is an Argentinian psychologist, psychotherapist and parapsychologist based at the Universidad Abierta Interamericana in Buenos Aires. His psi research topics have included ganzfeld telepathy, psychometry, mirror gazing, hypnosis, premonitions, and others. He is author of several Spanish-language books and recently published in English The Last Farewell Embrace: Paranormal Experiences Among Nurses (2019).

Alejandro Parra, based at the Universidad Abierta Interamericana in Buenos Aires, is one of a small but growing number of psi researchers in Latin America. Since the late 1990s, Parra has conducted many studies and written widely about the field. He is editor of the E-Boletín Psi, an online Spanish-language parapsychology journal, and writes for Spanish outlets in psychology and parapsychology (he has published most of his research in international parapsychological journals, more than any other Latin American researcher.) As president of the Parapsychological Association (2011-2013), he helped raise the research community’s awareness of Spanish-speaking parapsychology. He received fifteen grants from the BIAL Foundation since 1998, the largest recipient after Dean Radin.

Parra made significant contributions to the ganzfeld literature in the early 2000s, and later made important contributions to understanding aspects of spiritual practices, including mirror gazing and mediumship, both from a veridical psi and phenomenological perspective, and counselling on anomalous experiences and a historical and educational approach.

Parra is well regarded for both his laboratory psi work, historical topics and preservation issues (old books, photographs and spiritualism artifacts), and for his work in anomalistic psychology, especially the psychology of spirituality and paranormal experiences.

He works in a general clinical psychological practice, conducting therapy groups. He also conducts workshops with sensitives (mediums, psychics, healers and dowsers) and is running a research project on hearing voices and other auditive anomalous experiences.

During the early 2000s, Parra and his colleague Villanueva carried out several ganzfeld telepathy studies. In one of the largest, Parra probed the suggestion that the hypnogogic state – the transitional state of consciousness from sleep to wakefulness and vice-versa – is associated with an increase in attention to internal imagery (the hallmark of the ganzfeld state), indicating that it is a necessary condition for the expression of psi. One hundred and thirty-eight participants attended two ganzfeld trials at the Institute for Paranormal Psychology in Buenos Aires. Half the trials were under ganzfeld stimulation, the other half under normal waking consciousness. A CD containing 3,500 high-resolution colour pictures was used to provide image-targets. Outcome measures strongly supported the hypnogogic hypothesis: the ganzfeld trials gave a hit rate of 41.3% (p = 0.001); the non-ganzfeld trials gave a hit rate of 27.5%, (not significant); and the difference between the two conditions was also significant (p = 0 .016). No relationship was found between prior psi experiences and ESP scores. Nevertheless, Parra and Villanueva conclude that the successful ESP results using ganzfeld stimulation were related to a modified state of consciousness – the hypnogogic state – above and beyond any other variable.1

In an investigation of remote diagnosis, 214 participants who had reported psi experiences were asked to discern the cause of death of deceased individuals by their photographs, either by handling them and trying to perceive information mentally (mental condition) or by use of a pendulum (motor condition). Results were highly significant for the mental condition (p = 0.001), and significantly more than the motor condition (p = 0.004).

In the second part of the experiment, participants tried to discern from photographs individuals who had committed suicide. The mental condition was marginally significant psi scoring (p = 0.075) but was only non-significantly above the motor condition. Parra concludes that mental remote diagnosis is superior to motor diagnosis, but that psychological defences may block mental psi phenomena when the target is of a highly emotional nature.2

Parra investigated the phenomenon of psychometry – a type of anomalous cognition which allows a psychic to receive paranormal impressions from a physical object. He recruited participants, some of whom claimed psychometric ability, together with some who had had anomalous experiences and others who had none. They were encouraged to touch token objects and report any mental impressions, which were later coded for accuracy. Those who reported psychometric ability were found to be more accurate with regard to the history of the objects than those who simply reported having had anomalous experiences to a significant degree (p = 0.041). Additionally, there was greater variability among the ESP experiencers compared to those who claimed psychic abilities, with both psi-hitting and psi-missing in abundance for the experiencers and mainly psi-hitting for those with claimed abilities.3

Parra investigated the psychological correlates of the psychomanteum experience, in which mirror-gazing is performed under subdued lighting within a small nested enclosure. One hundred and twenty-eight participants, mostly female, were subjected to psychological and personality tests and described previous psychic experiences. Parra’s first prediction, of a positive correlation between prior psi experiences and extraversion, was confirmed. However, a second prediction, of a positive correlation between the number of paranormal experiences and openness to experience, was not confirmed. Disappointingly, a comparison between performance on psi tasks conducted during the psychomanteum state and personality measures did not confirm the trends found in previous work on the relation between personality and performance at an experimental psi task.5

Parra conducted two studies using the free-response ESP method in order to probe the hypnosis-ESP connection. One hundred and one participants were divided into high and low hypnotizability (the ability to enter a hypnotic trance) then tested for ESP. As predicted, the two groups scored differently on hypnotic susceptibility and psi scores (p = 0 .012.)6

Using undergraduate students (Argentine and Peruvian) as subjects, Parra tested three hypotheses, that those who reported extrasensory experiences would have a higher capacity than non-experients for: 1) auditory, visual and tactile hallucination; 2) schizotypy proneness; 3) absorption/dissociation; and 4) fantasy proneness. The questionnaire data revealed a higher level of hallucination proneness and cognitive-perceptual schizotypy in ESP experients compared to non-experients, as well as higher absorption and fantasy proneness. Absent veridical elements, the findings suggest that paranormal experiences may better be interpreted as special kinds of hallucinatory phenomena rather than having a deeper meaning.9

Parra investigated the cognitive processes underlying psychic claimants, in particular the observation that a combination of intuitive and thinking styles is optimum for psychic expression. He enlisted 94 participants who believed in the reality of psi, of whom 49 claimed to have psychic ability, and administered personality and thinking style tests; they also completed the Constructive Thinking Inventory and the Anomalous Experiences Inventory. The psychic claimants group achieved significantly higher scores on 12 out of 23 factors that clearly exceeded chance. Individuals claiming psychic ability were found to be more positive, more action-oriented in their thinking, more accepting of others, but also, unexpectedly, more rigid in their thinking than those who claimed no psychic ability.10

Books by Parra include:

In 2006 Parra created a new on-line publication, the E-Bulletin Psi, of which 52 issues have been published to-date (see http://www.alipsi.com.ar/publicaciones_ipp.asp).

During the 1990s, Parra appointed Daniel Gómez Montanelli, a clinical psychologist, to provide information and counseling to people who called the Institute for help. In 1998, Gómez Montanelli and Parra carried out a research project to record people’s reactions to disturbing psi experiences and explore their associated emotional processing. This survey was repeated in 2014 with psychologist Juan Manuel Corbetta.

Parra has collected around 3500 books and 12,000 issues of academic journals and popular magazines –  the most important collection of its kind in Argentina and possibly in Latin America. The Agencia Latinoamericana de Información Psi (ALIPsi) is an internet-based database of parapsychology references and on-line information related to the Spanish-speaking literature (www.alipsi.com.ar).

Parra, A. (2013a). A phenomenological examination of premonition experiences in dreams and waking states: A survey study. Australian Journal of Parapsychology 13/2, 187-212. Also in Proceedings of the 56th Parapsychological Association Annual Convention, Viterbo, Italy, August 8-11.

Parra, A. (2013b). The cost of being different: The relationship between paranormal experiences and positive/negative schizotypy. In P. Tressoldi & M. Biondi (eds.), Proceedings of the 56th Annual Convention of the Parapsychological Association (Viterbo, Italy), 26.

Parra, A., Villanueva, J. (2006). ESP under the Ganzfeld, in Contrast with the Induction of Relaxation as a Psi-Conducive State. Australian Journal of Parapsychology 6/2, 167-185.

Parra, A. & Argibay, J.C. (2007). "Comparing a free-response psychometry test with a free-response visual imagery test for a non-psychic sample". Journal of the Society for Psychical Research, 71/2, 91-99.

Parra, A., Argibay, C. (2009). An experimental study with ordinary people for testing “sacred” objects through psi detection. Journal of the Society for Psychical Research 73/1, 41-49.

Parra, A., Argibay, C. (2012). Dissociation, absorption, fantasy proneness and sensation-seeking in psychic claimants. Journal of the Society for Psychical Research 76/4, 193-203.

Parra, A., Argibay, C. (2013b). Anomalous remote diagnosis: mental and motor psi impressions under iconic representation of the person-target. Journal of Parapsychology 77, 123-130.

Parra, A., Argibay, C. (2013c). Psi and death of the person-target: An experiment with highly emotional iconic representations. NeuroQuantology 4/1, 537-543.