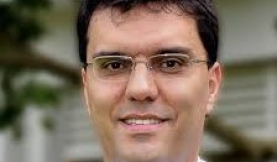 Alexander Moreira-Almeida is a Brazilian psychiatrist who has carried out empirical studies of mediumship and spiritual experiences.

Alexander Moreira-Almeida trained in psychiatry and cognitive-behavioural therapy at the Institute of Psychiatry of the University of São Paulo, Brazil, where he  obtained a PhD in health sciences. Formerly a postdoctoral fellow in religion and health at Duke University, he is now associate professor of psychiatry at UFJF’s School of Medicine and founder and director of NUPES, the Research Center in Spirituality and Health, Brazil. He is chair of the Sections on Spirituality of the Latin American (APAL) and the Brazilian (ABP) Psychiatric Associations, and former chair of the Section on Religion, Spirituality and Psychiatry of the World Psychiatric Association (WPA) (2014-17 and 2017-2020).  He coordinated the proposal and approval of the WPA Position Statement on Spirituality and Religion in Psychiatry (World Psychiatry  15:87-88, 2016), and the translation of it into Portuguese, Spanish, French, Dutch, and Arabic.

Moreira-Almeida’s main research interests are the mind-brain relationship and empirical studies of spiritual experiences, together with the methodology and epistemology that underly them. In a 2012 paper, Moreira-Almeida underlines the difficulty of trying to accommodate such phenomena within the standard reductionist model, which explains consciousness as a by-product of brain activity. These data support a philosophical shift away from reductionism towards other models of consciousness such as dualism and panpsychism, Moreira-Almeida argues.1

He expands on this theme in Exploring Frontiers of the Mind-Brain Relationship (2012), arguing against reductionist accounts of consciousness and advocating instead a balanced psychobiological approach, one that bridges the philosophy and science of  mind to examine transcendent phenomena such as mystical states, near-death experiences and past-life memories.2

In a 2013 paper,3 Moreira-Almeida notes a large increase in scientific studies on spirituality as a generic subject but also a relative lack of scientific awareness of spiritual experiences themselves, arguably the essence of spirituality. Spiritual experiences often involve altered states of consciousness, reports of anomalous experiences and of consciousness beyond the body, notably phenomena such as end-of-life and near death experiences, mediumship and putative memories of previous lives. Moreira-Almeida argues that an understanding of these opens the door to a larger view of human consciousness beyond brain-based models. Studies of meditative states show top-down causation of intention on brain states and end of life, while near death experiences reveal normal or even above normal mental function under severe brain damage and stress. He points out that growing scientific attention to spiritual experiences4 has exposed the shortcomings of reductionist accounts of consciousness.

In a 2012 study, Moreira-Almeida reviews the evidence for mediumship with reference to the mind-brain problem. In particular, the cases of  Leonora Piper and Chico Xavier are found to demonstrate skills and knowledge unlikely to have been acquired by conventional communication routes. Moreira-Almeida discusses the implications of scientific research on mediums for understanding the mind-body problem.5

A 2014 study investigated Chico Xavier, a prolific Brazilian medium of the late twentieth century, focusing on ‘letters’ said to have been written in his hand directed by deceased individuals.6 Thirteen scripts attributed to a single deceased person were identified and the information analysed. The likeliness of Xavier having access to the information by ordinary means were rated according in conjunction with documents and interviews with friends and family members of the deceased individual, using scales devised for this type of mediumiship research. Of 99 items of information, 98 were rated as ‘clear and precise fit’, indicating that normal explanations in terms of fraud, chance, information leakage and cold reading were implausible. A second study carried out in 2019 analysed a single letter, in which 29 items of verifiable information were rated as a ‘clear and precise fit’, including specific information such as names, events and intimate personal details.7

In 2020, Moreira-Almeida and colleagues reported a test of the ability of eight mediums to write down accurate information concerning deceased individuals. Ninety-four blind proxy-sitters participated in 18 sessions, each rating a target mediumistic letter pertaining to someone they knew along with five control ‘dummy’ letters. Overall there was no difference in ratings between control and target letters, providing no evidence of anomalous information retrieval under controlled conditions. The authors argue that genuine mediumistic ability may be inhibited by a too strong emphasis on scientific controls, and recommend that future research aims for a more productive balance.8

Psychography – the term given to a purported spirit communicating through a medium’s hand – was investigated by means of functional neuroimaging of five mediums.9 During this activity, the more experienced mediums displayed less brain activity compared to their normal (non-trance) writing than those that were less experienced, specifically in the left culmen, left hippocampus, left inferior occipital gyrus, left anterior cingulate, right superior temporal gyrus and right precentral gyrus. Also, a correlation was found between decreasing activity in the brain regions and increasing complexity of the writing produced during trance writing. Neither of these relationships is predicted by current brain-based models of consciousness.

In a 2019 study, Moreira-Almeida and colleagues reviewed the most robust scientific evidence for a relationship between religiousness/spirituality and mental health.10 They discuss possible mechanisms, such as life meaning, optimism, gratitude, social support, self-esteem, and aspiration for a healthier lifestyle. In scientific studies, individuals with higher levels of spiritual belief and religious practice demonstrated lower rates of depression, suicidal behaviour, and alcohol and drug use and abuse.

Araujo and Moreira-Almeida carried out a study to evaluate the flexibility of psychiatrists’ opinions on the mind body relationship (MBR) when they were exposed to non-materialist ideas. Thirty percent of the psychiatrists changed from a materialist to a non-materialist view of mind after attending a debate, while 17% changed in the opposite direction, entrenching materialist viewpoints.  It was concluded that psychiatrists are generally open to non-reductionist philosophies and their opinions are relatively malleable.11

However, a literature review of academic psychology literature found widespread misrepresentations of the MBR and a strong bias against dualism and toward a physicalist approach.12  Moreira-Almeida and Araujo discuss how this prevents psychiatrists from exploring a more encompassing viewpoint of human experience, in that of their clients.13

Daher Jr, J.,  Damiano, R., Lucchetti, A., Moreira-Almeida, A. & Lucchetti, G. (2016). Research on Experiences Related to the Possibility of Consciousness Beyond the Brain: A Bibliometric Analysis of Global Scientific Output. Journal of Nervous and Mental Disease 205, 10, 1097-1103

Moreira-Almeida, A. (2013). Implications of spiritual experiences to the understanding of mind–brain relationship. Asian Journal of Psychiatry 6, 585-589.

Moreira-Almeida, A. & Araujo, S. (2017). The mind-brain problem in psychiatry: why theoretical pluralism is better than theoretical monism. Dialogues in Philosophy, Mental and Neuro Sciences 10, 23-25.

Moreira-Almeida, A., Araújo, S. & Cloninger, C. (2018). The presentation of the mind-brain problem in leading psychiatry journals. Brazilian Journal of Psychiatry 40, 335-342.

Sleutjes, A.,  Moreira-Almeida, A. & Greyson, B. (2014). Almost 40 Years Investigating Near-Death Experiences: An Overview of Mainstream Scientific Journals. Journal of Nervous and Mental Disease 202, 833-836.