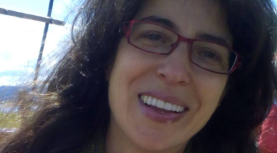 Ana Borges Flores is a lawyer by training who has moved into psychology and psi research, and is developing experimental tests in quantum theory.

Ana Borges Flores trained and practised as a lawyer in Portugal. In 2006, she accepted a position studying for a MSc on transpersonal psychology and consciousness studies at the University of Northampton, under the supervision of Harald Walach. Her final project was developed in 2007 during an internship at the Institute of Noetic Sciences, where she worked with Dean Radin investigating the presentiment response.1

In 2015, she accepted a position at Edinburgh’s Koestler Parapsychology Unit (KPU) to study for a PhD in 2015 under the supervision of Caroline Watt and supported by Harold Walach. She replicated earlier work that used a special method – the correlational matrix method (CMM) - to test predictions made by generalised quantum theory, a theoretical development in parapsychology that considers both physical and psychological aspects. In 2021 she accepted a post-doctoral position at the University of Minho School of Medicine in Portugal, where she developed an online game designed to further explore the CMM approach.

Generalised quantum theory (GQT) was developed by physicists Harald Atmanspacher, Hartmann Römer and Walter von Lucadou together with clinical psychologist Harald Walach, and was shared with the academic community in 2002.2  From the basics of physical quantum theory known as ‘formalisms’, it generates a standalone abstract version that can be applied to non-physics based systems, for example psychological and biological. Of key importance, GQT retains the core aspects of regular physical quantum theory: entanglement and complementarity.

Complementarity refers to the relationship between local measurable observables and the global system. For example, one could measure the polarization of a photon and then know the general polarization of the rest of the system, in that it would be opposite or complementary to that found locally. Entanglement refers to the relationship between particles and processes that once shared a common connection, separated by time and space. The relevance to psi is to that it may be explained in terms of entanglement within generalized quantum theory (GQT).3  This allows for entangled states between physical, psychological and psychological systems, eventually giving rise to nonlocal (distant in space and time) correlations, which Walach and others propose as the basis for psi phenomena.4

To regard psi phenomena in terms of non-local acausal correlations within generalized quantum theory is essentially to admit the impossibility of strictly replicating any given finding, as the nature of the acausal correlations prevents any signal travelling between them. If psi experiments are successfully replicated, this would open up a way of transmitting a signal, something that is forbidden by non-local correlations in GQT. The correlational matrix method (CMM) enables the separation of causal and entanglement processes, allowing the inclusion of causal processes in psi experiments and helping stabilize the entanglement of the system.

In a typical CMM experiment, participants are instructed to influence the output of a RNG, as in a PK study, but with the aim of discovering what temporary acausal correlations might be found between physical and psychological variables, that is, correlations that have no discernible physical cause and effect basis, for example the relationship between voltage spikes and the length of time a volunteer presses a button after the spikes are measured.  Typically twice as many correlations are found during experimental sessions as in control sessions, of which the odds against chance are very high.5 In her PhD thesis6 Flores reports experiments which she carried out that appear to give evidence of this.

At the University of Minho School of Medicine, Flores developed a mobile game app to enable mass online testing. Here, the performance of two different random number generators was studied, in one with a participant playing the game and the other running the game without participant interaction. Flores investigated whether a participant playing a mobile game might interact with the ‘behaviour’ of two independent random number generators.

As a control, the same game played in the same device without players’ knowledge, replicating the original game, but this time without using subjects’ psychological variables. These variables, together with RNG physical variables were correlated into matrices. Flores hypothesized that subjects playing a mobile game, driven by random number generators, would produce different correlations than if there was no interaction with subjects. Results strongly supported this hypothesis (p = 10 x 10-20).7 Importantly, more conservative permutation analyses still give high odds against chance (10 x 10-12).8