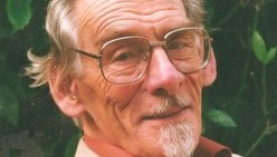 Andrew Green (1927-2004), known in the British media as the ‘Spectre Inspector’, was a ghost hunter and author of popular books on hauntings.

Andrew Malcolm Green was born on 28 July 1927 in Ealing, west London. He was educated at Borderstone Grammar School, then received a science degree from the London School of Economics and an MPhil from Goldsmiths, University of London. In the 1950s, he worked in public relations and management and as a magazine editor. He then turned to full-time writing and publishing, establishing his own firm Malcom Publications.

Green became interested in the paranormal in 1944 when, on a visit with his father to an unoccupied Victorian house in Montpelier Road, Ealing (now demolished), he sensed a voice telling him to throw himself out of an upstairs window.1  He believed that a photograph that he took of the window showed the face of the ghost of a young girl. He later discovered that the property had been the site of several suicides during the last sixty years.

Green, a convinced humanist, stressed the need for a rational approach to haunting phenomena. He did not believe they were evidence of post-mortem survival, maintaining instead that they were often purely psychological in origin, based on optical illusions and misperceptions, or caused by a combination of telepathy, psychokinesis and electromagnetic energy.

In 1956, he investigated the case of Shirley Hitchings, the ‘poltergeist girl of Battersea’, in the course of which he received a letter claiming to originate from the girl’s possessing spirit, Donald Capet, ‘an illegitimate son of a member of the French monarchy’. This won an entry in the Guinness Book of Records as the only known letter from a poltergeist.  It did not impress Green, but he was unable to explain some seemingly psychokinetic phenomena that he observed in the girl’s presence.

In April 1996, Green was asked by a public relations consultant Mark Borkowski to investigate tales of haunting phenomena at London’s Royal Albert Hall. He arrived with equipment to try to trace any anomalies, but the ensuing press attention made serious investigation impossible.2

The first of his many books, Our Haunted Kingdom, a directory of recent ghost sightings, was published in 1972. In the following year he published Ghost Hunting: A Practical Guide, which went through many editions and is credited with having popularized the use by ghost hunters of instruments, from simple thermometers to tape recorders and sophisticated electronic equipment. Later books gave accounts of haunting reports, particularly in the south of England.

He was in demand for advice by people who believed they were experiencing paranormal phenomena, for which he was often able to find reassuringly normal explanations. His activities were frequently mentioned in the media, which dubbed him a ‘secular exorcist’ and ‘spectre inspector’.

He was voted honorary president of the Borderline Science Investigation Group (now defunct) and was honoured by the Ghost Club for his lifetime of work in psychical research.

The novelist James Herbert acknowledged Green as the inspiration for the parapsychologist Chris Bishop in his novel The Dark.