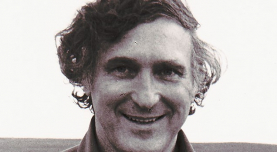 Andrija Puharich was a scientist, inventor and psi researcher, now remembered mainly for his close collaboration with the Israeli psychic Uri Geller.

Karel Puharich, nicknamed 'Andrija', was born on February 19, 1918, in Chicago,1 to Yugoslav immigrants. He grew up in Chicago and rural Illinois. His parents enrolled him at school as 'Henry' (their Anglicised version of 'Andrija'.)2 As a consequence, his name sometimes appears as Henry K. Puharich.

Puharich completed elementary school at Cooper Grammar School in 1932. He finished his schooling at Farragut High School where he graduated in 1938. He continued his education at the College of Liberal Arts of Northwestern University, graduating with a BA, majoring in philosophy with a minor in pre-medical subjects.

He continued on to study medicine (as part of the Specialized Army program) and graduated with a MB in 1947. He completed his residency in internal medicine at Permanente Hospital, California.3

Puharich is known for his contributions to both mainstream science and parapsychology, the former sometimes as controversial as the latter.

He developed his professional life as an independent researcher (that is, generally without backing or employment within a higher education institution) and this necessitated developing funding streams that supported his work. Funding was variously derived from philanthropy or business investment. As a consequence, he was able to pursue investigations into a wide range of topics, from tracking down and using psychedelic mushrooms in order to improve telepathy to studying in the effects of extremely low frequency (ELF).

Puharich was a prolific inventor, holding 56 American and foreign patents by the end of his career. In this capacity he was most noted in his lifetime for inventing a microelectronic hearing aid, but he also contributed to the fields of medical electronics, neurophysiology and biocybernetics.

The following is drawn from his resumé, published on the website created by his son Andy, and the book Memories of a Maverick, written by his second wife HGJ Hermans.

Commencing in 1948, Puharich embarked on a career in medical research. His initial interest was in the field of biophysics. Influenced by a wealthy couple who would become his early benefactors, he decided to start a laboratory in the Camden by-the-sea – a remote location in Maine – near where the couple lived. He used a donated barn as his first laboratory and by 1949 had received enough funds to employ three laboratory assistants. He also had sponsorship from General Foods Corporation for research into neural activity of animals while eating.

At this time he became acquainted with Eileen Garrett, a medium and founder of the Parapsychology Foundation in New York. After she correctly diagnosed an illness he was disposed to, and correctly identified when it had commenced (when he was 12), he became interested in finding out more about telepathy.

This scenario – a unique location, independent funding, and the capacity to undertake a combination of mainstream medical and parapsychological research – would set the scene for much of his career. The special atmosphere that he seemed to create, knowingly or otherwise, also contributed to a reputation as an unconventional scientist.

When the barn became unavailable he purchased a large estate ('Warrenton' in Glen Cove, Maine) and continued in what his second wife called a 'scientific commune'. Here, domestic and professional activities often overlapped, and the place attracted many and varied individuals. After a two-year break when he was recalled to military duty, Puharich returned to the estate and managed to get it functioning again. The place and time and activities are described by Aldous Huxley, who wrote about his experience there in a letter to Eileen Garrett:

I spent some days earlier this month, at Glen Cove, in the strange household assembled by Puharich – Alice [Bourverie] and Mrs P behaving to one another in a conspicuously friendly way; Elinor Bond, doing telepathic guessing remarkably well, but not producing anything of interest or value in the mediumistic sitting she gave me; Frances Farrelly, with her diagnostic machine – which Puharich's tests have shown to be merely an instrument, like a crystal ball, for concentrating ESP faculties; Harry, the Dutch sculptor, who goes into trances in the Faraday cages and produces automatic scripts in Egyptian hieroglyphics; Narodny, the cockroach man, who is preparing experiments to test the effects of human telepathy on insects. It was all very lively and amusing – and, I really think, promising; for whatever may be said against Puharich, he is certainly very intelligent, extremely well-read and highly enterprising. His aim is to reproduce by modern pharmacological, electronic and physical methods the conditions used by the shamans for getting into a state of travelling clairvoyance and then, if he succeeds, to send people to explore systematically “the Other World”.4

During the later phase of this period, the focus of his research turned more significantly to parapsychology, and the initial investigations for what would become two important books were undertaken. Much of his work with Peter Hurkos, the Dutch psychic, was carried out at this time. And his interest in the psychedelic effect of mushrooms, and the potential to use it to increase psychic abilities, was seeded, leading to the publication in 1959 of The Sacred Mushroom.

Towards the end of the 50s, the Round Table Foundation lost much of its funding and was disbanded by 1958.

Puharich now retirmed to practising medicine for a short time. However, The Sacred Mushroom elicited much attention and he was offered the opportunity to research parapsychology full time after moving to the West Coast of the USA. His resumé contains details of his activities, including consultancies for numerous organisations both mainstream and parapsychological.5 Out of this period came the remainder of the research which would provide the content for his book Beyond Telepathy, published in 1962.

During this brief period he gained more popular recognition. His expeditions to Mexico to find and use psychedelic mushrooms featured in an episode of One Step Beyond – a TV series which provided re-enactments of paranormal events. He also appeared (as himself) in an episode of the Perry Mason TV show called The Case of the Meddling Medium.6

The following decade was dominated by his work for Intelectron Corporation, a private organisation which he co-founded with investment funds of $300,000 provided by a group of New York businessmen. He maintained his role as President and Director of Medical Research at the organisation until 1971. During his time there, the organisation was awarded a contract with the United States Air Force Systems Command to further explore the electrostimulation techniques of hearing. 7

Subsequent to leaving Intelectron Corporation, Puharich continued his research in bio-cyberneticsm. However, his main focus was on investigating and promoting the psychic abilities of Uri Geller. He organised two significant conferences which discussed the results of tests of Uri Geller's abilities, and in 1974 published A Journal of the Mystery of Uri Geller.

The book became a best-seller, but was slated by the scientific community, which felt that an intelligent and promising, if unorthodox, scientist had lost his perspective.8

For the remainder of his career, Puharich juggled the fall-out from the publication of this book with his new role as a high-profile paranormal expert and mainstream scientific research. Within parapsychology he continued to study high-level psychics and healers, notably the Mexican healer Pachita. He also rekindled an interest in the work of Nikola Tesla, and commenced research in the area of extremely low frequency (ELF) effects. This research also proved controversial and he ended up moving to Mexico in order to complete his work in this area, citing CIA conspiracies to undermine his research.9

Towards the end of his career he became concerned with ecological issues, and his later research addressed the issues of energy and water. In 1983, he was granted a patent for a 'Method and Apparatus for Splitting Water Molecules'.

He ended his research career in America after being invited to undertake research at Devotion, an estate in North Carolina. He died on January 3 1995 in Winston Salem, North Carolina at the age of 76.10

The following three books are representative of the sort of research he undertook that is particularly relevant to his contributions to parapsychology.

Puharich wrote this book as a result of coming into contact with Harry Stone, a sculptor who in deep trance communicated in hieroglyphs. During one such session, Stone described a ritual that involved what appeared to be a mushroom. This stimulated Puharich to follow the shamanic practice of ingesting psychedelic fungi as a means to facilitate an altered state of consciousness, one conducive to eliciting psi.

Beyond Telepathy describes Puharich attempts to understand the physical effect, especially on the brain, of shamanic and yogic training. He uses this research as a foundation for theories about how psychic function works, and what conditions can be created to stimulate it, drawing on his expertise in neurology, physiology, pharmacology and parapsychology. The book also outlines experiments with Peter Hurkos and other psychics, notably a study of Hurkos's mental influence on photographic exposure.

Uri Geller: A Journal of the Mystery of Uri Geller

This book brought Puharich both public acclaim and scientific ridicule. Its publication followed his decision to leave Intelectron Corporation and turn his attention fully to ‘develop a theoretical base for all of my mind researches, and…to find human beings with great psychic talents who would cooperate as research subjects’.11

The book contains details about the life of Uri Geller, descriptions of the experiments they did testing his psychic abilities, and information about ‘extraterrestrial’ theories. It also contains a description of the famous experiments undertaken at the SRI laboratories with Hal Putoff and Russell Targ.

Puharich was interested in psychic healers. He studied the Brazilian Arigó and the Mexican Pachita, undergoing successful operations by both. The following example - his account of what happened after Arigo removed a lipoma (tumour) from his right arm, by means of pocketknife and without anaesthetic - illustrates the lengths he was prepared to go to for his research.

I felt that my surgery was not adequate for scientific purposes, as I was not able to observe it properly, nor did I experience enough significant data points to evaluate it. However, given the unsterile conditions of the surgery, I would have a real test of Arigó's powers if the wound did not get infected. Hence, I determined not to use any antiseptics on the wound and not to use any antibiotics, in order to test the postoperative course with respect to possible infection.

I therefore changed the bandage once a day so that I could photograph the healing and infective course. By the third day the wound had healed by primary intention, and not one drop of pus had appeared. I did not develop any symptoms of blood poisoning or tetanus. By the fourth day I dispensed with the bandage. With this evidence I was now convinced that Arigó had extraordinary powers in surgery, bacterial control, and anaesthesia.12

Nearly every research topic that Puharich engaged with was in some way controversial. Unlike many psi investigators, he did not shy away from working with mediums, channellers or psychic healers, subjects that for many are tainted with fraud. Most of the criticisms levelled against him relate to his work with Uri Geller, who is considered by researchers who have studied him at first hand to be capable of creating genuine anomalous phenomena.13  However, it is also accepted that Geller’s activity as an entertainer makes it hard to distinguish real psi from tricks. Puharich’s failure to take this adequately into account has tended to cast doubt on the legitimacy of the scientific experiments he performed with Geller, and the anecdotes he reported.

These doubts increased with Puharich's stated belief that Geller was an ambassador for extraterrestrial beings, which made him appear gullible and naïve, and tended to diminish the reach of some of his other activities, which, however, were informed by his wide ranging knowledge of medicine and biophysics and tackled challenging areas of human enquiry.