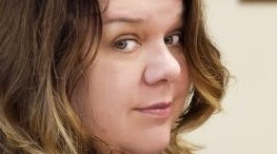 Annalisa Ventola, executive director of the Parapsychological Association, has carried out research into the psychological variables involved in poltergeist and haunting episodes.

Since 2010 Annalisa Ventola has been executive director of the Parapsychological Association, a role that involves managing general operations and publications, organizing annual conferences and conducting official correspondence. She has carried out research into the nature of poltergeist and haunting cases, helping to develop models of these phenomena and creating educational primers for a general audience.1

Ventola was awarded a BA in music from the Ohio State University, and continues to pursue activities in classical piano and neo-classical pop-art song.2

Ventola, Houran and Terhune designed a field study to assess whether areas in an alleged haunt and a control site, including active and inactive areas within the haunt site itself, differed with respect to contextual elements of the immediate environment (such as physical and structural elements) and the frequency of photographic anomalies – such as orbs, shadows, and fogging effects – across 14 representative locations. Photographs were blindly rated for the presence of anomalies.  There were significant contextual differences between the haunt and control location with lower temperature and higher humidity recorded at the former; no significant contextual differences were observed between the control and haunt locations within the haunt site itself. However, when the blinded ratings from the control and haunting site photographs were compared, clear significant differences were noted in the frequency of photographic anomalies, which extended when the control and haunt sites were compared within the wider haunt site.3

Ventola and colleagues extended their investigations of haunting phenomena to include psychological aspects, following observation that haunting and poltergeist experiences tend to occur around certain individuals.  In this study, 313 college students completed measures of anxiety, depression, vulnerability, paranormal belief, and transliminality (which measures the ease at which an individual is affected by information entering from the unconscious or the external world). Demographic information and details about haunt-type experiences were also sought. Using a split-sample approach, the researchers randomly pooled a haunt and non-haunt group and explored psychological and demographic relationships with haunt-like experiences across both.  Armed with these data, they ran a replication analysis using a fresh control and haunt sample to see if any of the relationships persisted. The psychological variables generally showed non-significant associations with measures of the haunting experiences, suggesting that cognitive deficits are not responsible for haunt-like experiences.

Given the strong relationship between haunt experiences and transliminality, Ventola and co-authors sought to probe for the same connection in poltergeist cases. This research was partly motivated by scepticism of the view that the focus of poltergeist activity is a disturbed adolescent, and a sense that the reality is probably more nuanced. The investigators located ten studies in the peer-reviewed English-language literature in which poltergeist focus persons had been attended by a health care professional and/or administered a psychometric measure.  Although the evidence for pathology was often scant and biased in nature, they did find eight psychological characteristics that were common throughout the studies – seven of which have well established associations with transliminality.

Transliminality also shows a significant relationship with childhood trauma, and as such appears to support the contested disease model. However, this is weakened by observational evidence of a relationship between the emotional state of a poltergeist agent and psychokinetic events, which points towards the transliminal model.

Finally, Ventola and co-authors carried out a review of 19 laboratory studies that found a highly significant relationship between psi scoring and transliminality (p = 3.70 * 10-5), providing more support for the transliminality-poltergeist hypothesis.5

In the PA’s publication Mindfield, Ventola describes historical correspondence provided by the late dream researcher Robert van de Castle, in which he details the reticence of the Parapsychological Association to pursue a symposium in 1970 at the American Association for the Advance of Science (AAAS) a year after the PA had been accepted within its ranks. Its concerns proved unfounded: the symposium made a solid start towards reaching out to the mainstream. Provocatively titled “There is no gate” the article  describes the evolution of PA/AAAS symposia from basic descriptions of simple research program to increasingly complex engagements involving luminaries in the field and outside (for instance Jessica Utts, former president of the American Statistics Association, in 1990.) Bias and prejudice were sometimes encountered from outspoken individuals, notably physicist John Wheeler’s exhortation in 1979 to ‘throw out the pseudos from the workshop of science’. However, the dominant response towards these symposia has been curiosity and open-mindedness. Ventola concludes that parapsychologists should behave less as passive victims when dealing with mainstream science and more as engaging advocates.6

Terhune, D.B. & Ventola, A., Houran, J. (2007). An analysis of contextual variables and the incidence of photographic anomalies at an alleged haunt and a control site. Journal of Scientific Exploration 21, 99-120.