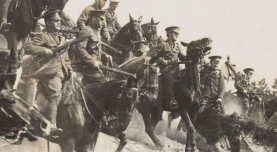 This Indian child remembered the life of an English cavalry officer who died fighting in World War I. His skin pigmentation was more typically English than Indian, as were certain of his behaviours and interests.

Kr Kekai Nandan Sahay, an Indian lawyer, investigated several reincarnation cases in the 1920s and reported on them in a pamphlet published around 1927. One was the case of Bajrang Bahadur (BB) Saxena, about which Sahay unfortunately was able to obtain only a general outline.

BB Saxena was born in 1918 in Bareilly, Uttar Pradesh, India, into a poor, uneducated family. His parents subscribed to the common Asian belief that children who recall past lives will die young and seem to have wished to suppress his memories. By the time Sahay reached the case, BB was seven or eight years old and no longer recalled anything of the previous life. Sahay nonetheless briefly summarized what he was able to determine:

His father and mother are of swarthy colour but he is very white, and has grey hair, and hasel [sic] eyes like English men. He has two round scars like those of a bullet, one on the right side of his neck and the other on his skull. He knew his story up to last year [1926?] when he narrated it to B. Shakambri Das Singi, Zamindar [tax collector, administrative head] of Zakati Mohalla [district], Bareilly. Now he has forgotten it. He used to take his meals with a knife and fork up to the age of four, used to play frogleap [leapfrog] and other peculiar games. He playfully walked in military fashion and gave cautions [orders]. His father and mother are old type people who firmly believe that such remembrance shortens life. They do not know English. They did not disclose the facts when the boy began to give them out. It is a pity that such a good and instructive case has been spoiled by superstition. He had two other brothers and a mother. His father had died long ago. He gives his name as Arthur and says he was a white soldier who died in the German war [World War I]. His age at the time of death was 28.1

Ian Stevenson reinvestigated this case in the 1960s and 1970s, when BB Saxena was in his 40s and 50s, and came to know him well. Besides talking to BB extensively, Stevenson interviewed BB’s sister (b c 1908) and older brother (b 1910), from whom he learned details of the case not reported by Sahay. Both were teenagers during the years BB was talking about the previous life and had retained strong memories about it. Stevenson interviewed them independently, but they gave very similar accounts.2

BB started speaking coherently when he was about eighteen months old but did not begin to refer to a previous life until he was between three and four years. Over time, he related the following:

BB never gave Arthur’s surname, nor did he say where he and his wife had lived or where he had been fighting when he died. The battle would not have occurred in India, because no World War I battles were fought there. This therefore is an international case, with death occurring in a country different from rebirth.

Children who recall previous lives typically display various kinds of behavioural memories in addition. When the life remembered occurred in the same culture as the present life, these are not always apparent until the previous incarnation is identified, but when the previous life transpired in a culture different from the present life, the behaviours usually stand out. During the period that BB was talking about the previous life and up to about age 12, he displayed several behaviours consistent with his memories of having been an Englishman. Among these were:

BB used English words he would have had no way of learning in his present life, his family not speaking English. This phenomenon, called xenoglossy, is common in reincarnation cases with previous lives in linguistic groups different from the present life. When playing at being a soldier, BB would say, in English, ‘left, right’ and ‘march’. He also used other words his family did not understand and are not recalled. BB learned to speak English more easily than the average Indian child of his place and time.

Physical signs of various sorts are common in reincarnation cases and can be especially striking when there is an ethnic contrast between past and present lives. From birth, BB’s hair was blond, virtually white. His complexion was pink and he was close to being an albino, although his eyes were brown and he lacked some characteristics normally seen with albinism.

The birthmark on BB’s neck was red, round and large—about 2.5 centimetres (1 inch) in diameter. When his neck muscles were relaxed, the centre of this birthmark was slightly depressed. Around the rim was an area of slightly abraded skin, as is often seen with gunshot points of entry. According to BB’s sister, at birth this mark had the appearance of exposed flesh and there was some concern that it might ‘break out’ or become ulcerated.

The birthmark on BB’s head was not clearly distinguishable by the time Stevenson interviewed him, but it was described by Sahay as being on the head and perhaps marked the bullet’s exit wound, consistent with his having been shot from below while on a horse. Alternatively, Stevenson thought, it might have represented a second, unrelated wound Arthur received.

BB had a younger brother and sister. The sister died young, at 2-3 years of age, but BB’s brother survived. Stevenson judged the ‘defect’ of his pigmentation to be even stronger than BB’s and calls him an albino, although his eyes were brown, resembling BB’s. Like BB, he dyed his hair dark after completing his university studies. Although BB’s brother never claimed to have memories of a previous and did not have the same strong behavioural memories as BB, he nonetheless complained about the heat in India. BB believed that this brother had been his brother also in the life he recalled. The brothers were very close.

During his youth and early adulthood, BB became a follower of Mahatma Gandhi and rejected British cultural influences. He began to wear traditional Indian attire and dyed his hair dark. During the years Stevenson knew him, he was staunchly Indian in his attitudes. He objected to the use of English as the national language of India.  However, he preserved some traits that Stevenson judged to be distinctively British, such as preferring a cooler climate. His food preferences had changed little. BB refused marriages arranged for him in his 20s and eventually married an Indian woman of his choice in his 30s. His wife told Stevenson that BB favoured utensils rather than eating with his hands, as she did. BB obtained an MA from an Indian university and made a career in journalism.

Although neither Sahay nor Stevenson were able to make a definite identification of the person whose life BB Saxena recalled, Sahay’s account of the case came to the attention of an English family called Phillips, then residing in India. An adult member of this family visited the Saxenas and proposed to adopt BB, in exchange providing a pension to his father for life.

Phillips explained that he had lost brother during fighting in the World War (World War I). He had been killed by a shot to the neck whilst riding a horse in battle. BB, then about eight years old, did not recognize Phillips as anyone from his previous life. BB’s sister, who told Stevenson these things, did not recall whether the man had told the family that his brother was named Arthur. BB’s family rejected Phillips’ offer and never heard from him again.

Stevenson conjectured that Arthur Phillips might have been a British cavalry officer stationed in Bareilly with his wife, who had been deployed to France with a regiment of the Indian Army. In fact, a Bareilly Brigade, with some cavalry troops, is known to have fought in France in 1914–1915. After death, Arthur might have wanted to return to his wife and family in Bareilly but become reincarnated in the wrong family there.

Stevenson, I. (1997). Reincarnation and Biology: A Contribution to the Etiology of Birthmarks and Birth Defects. Vol. 2: Birth Defects and Other Anomalies. Westport, Connecticut, USA: Praeger.