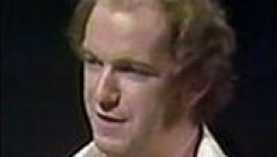 Carl Sargent (1952-2018) was a British parapsychologist who in the 1970s reported successful ganzfeld telepathy experiments. The results were later cast in doubt by claims of deception by a prominent sceptic. He left the field shortly afterwards and turned to developing role-playing games under the name Keith Martin.

Carl Sargent was raised in South Wales and the West of England. He was educated at Churchill College, Cambridge, receiving a degree in psychology in 1974. He received a PhD in 1979 for work that included parapsychology, the first such to be awarded at Cambridge, which was followed by post-doctoral work in parapsychology at the psychological laboratory of Cambridge University. He taught parasychology at Cambridge while carrying out ESP experiments with student volunteers.

Sargent was interested in how the personality trait of neuroticism affected ESP ability. With Trevor Harley he tested 186 participants, 150 in two groups and 36 individually. Each was given a short personality test before being run through an ESP guessing test. High-neurotic individuals scored significantly below chance when tested individually, while low neurotics scored non-significantly above chance. When tested in groups the patterns reversed, with high-neurotics scoring somewhat better than the low neurotics. Sargent explained these differences by situational anxiety levels. When high-neurotic individuals are tested individually they become self-conscious, which raises levels of arousal and mental noise, tending to swamp any weak psi signal. When tested in groups, the high-neurotic individual can lose herself in the crowd, reducing anxiety and mental noise levels and enabling improvements in ESP test scoring.1

To explore the role of group effects in more detail, Sargent arranged for 91 sixth-form pupils to guess which of two names – in male and female pairings – was the target of an ESP tests, first running them through personality tests. High neurotic females performed better than low neurotic females in this group setting. Among high-neurotic males the effect was reversed. Sargent speculated that the high neurotic males, finding themselves in a minority (highlighted by the use of male and female names as target material), were not able to lose themselves in the crowd in the same way as the females.2

Sargent contributed nine of 28 studies reviewed in the first ganzfeld meta-analysis (published in 1985), often achieving hit rates of 40% – far above the expected 25%.

In the ganzfeld model, adopted the early 1980s, successful scoring is encouraged by a reduction of mental noise, eliminating sensory stimulation. As an experiment progresses, participants become habituated to the absence of sensory stimulation, and internal noise reduces further: therefore, Sargent speculated, psi scoring should increase with time. In an initial experiment he allowed participants to terminate a session at will, finding clear improvement in scoring with increasing times. In a further study, imagery recorded by participants later in a session was found to be more accurate than that recorded earlier (p = 0.0002).

Sargent also tested for the influence of personality in ganzfeld experiments, in particular the extraversion-neuroticism relationship. He found a clear scoring advantage for extraverts over introverts in nearly every experiment, but only for the first sessions. With repeat testing the extroversion-introversion differences disappeared. He reasoned that situational anxieties are reduced as the introvert becomes more accustomed to the testing environment, creating less arousal and boosting the sensory reduction effect.3

By the early 1980s Carl Sargent was a leading ganzfeld ESP researcher, responsible for around half of significant studies. His status as a Cambridge researcher further raised their prominence.

As a result they courted critical examination by critics of parapsychology, notably Susan Blackmore, then a psychologist at the University of Bristol. In 1987, Blackmore published a critique based on a visit to Sargent’s laboratory that she made eight years earlier. The abstract reads:

I observed 13 sessions, of which six were direct hits. I considered whether the results might be accounted for by sensory leakage, experimental error, cheating or psi. I made observations of the sessions to test these hypotheses. The experimental design effectively ruled out sensory leakage. However, I observed several errors in the way the protocol was observed. Most of these occurred in the cumbersome randomization procedure. It was not clear how these errors came about. Their origin might have been clarified by either (a) a statement from Sargent or his colleagues, or (b) by reanalyses of the raw data. However neither has been made available. Sargent’s nine ganzfeld studies form a considerable portion of the total ganzfeld database. In view of Sargent’s unwillingness to explain the errors found, or to make his data available to other researchers, I suggest that these results should be viewed with caution.4

Blackmore described irregularities in Sargent’s protocol, such as missing codes on target pictures to Sargent’s presence during the judging, possibly enabling bias, as she claimed he might have known the identity of the target on some of the trials.

The full journal article can be read here. Blackmore describes the incident in more personal terms in her 1996 autobiography In Search of the Light.

Sargent rebutted the criticisms,5 arguing that her original paper, written in 1979 and privately circulated, differed in certain details from the paper published in 1987, which had a markedly more sceptical tone.6  He claimed that Blackmore made several errors of fact in her observations, pointing out that her testimony was uncorroborated, while his own was backed up by witnesses.7 He took issue with her claim that her attempts to discover fraud, which included searching an office and making covert checks, were ‘simple and unobtrusive’.8 He argued that fraudulent manoeuvres she claimed to expose could not have affected the result positively and that she failed to mention factors that ruled out fraud.9 Against the charge of failing to make his data available for reanalysis, he pointed out that during her visit Blackmore spent an afternoon going through it and making statistical analyses.10  Sargent also complained that, while at the time she accepted his and his associate’s explanations of inconsistencies, she later ‘spread defamatory rumours and insinuations of fraud’.11

However, Sargent refused to co-operate in further investigation and abandoned the field shortly afterwards. His co-experimenter Trevor Harley continued to assert his support of Sargent’s rebuttal in recent communication with this author.12

In 1988, Sargent returned to a previous interest in role-playing games, authoring Fighting Fantasy gamebooks and novels for Games Workshop.  He also authored role-playing game narratives for the Dungeons & Dragons franchise, including Greyhawk, Warhammer, and Shadowrun.13 In later life he worked as a freelance designer.

With Hans Eysenck, Sargent authored an introductory textbook for parapsychology, Explaining the Unexplained (1982). This gives a good overview the experimental work being carried out at the time, along with a discussion of poltergeist, metal bending and survival research.14 An updated second edition was published in 1993.15