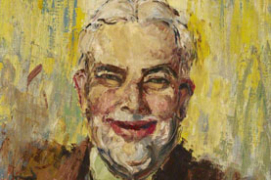 CEM Joad  (1891-1953) was a British philosopher and television personality with an active interest in psychical research.

Cyril Edwin Michenson Joad was born on 12 August 1891, in Durham, England. He was educated at Balliol College, Oxford, where he became a socialist and a pacifist. He was a conscientious objector in World War I. After retiring from a government job in 1930, he joined the faculty of Birkbeck College, University of London, as a philosopher and served as head of the Philosophy and Psychology Department for twenty-three years.

A prolific writer, he wrote over one hundred books and was published widely in academic journals and in the popular press. He was well known as a radio and television personality on BBC Brains Trust from 1941-1947. He suffered loss of reputation, and the termination of his position on the programme, when he was caught in his routine practice of not paying for train tickets.

Joad collaborated with the psychical investigator Harry Price on some of his paranormal investigations. He was a friend of the literary scholar and popular Christian writer CS Lewis, who was an important influence on him and helped bring about Joad’s conversion from atheism to Christianity late in life.

In his youth, Joad was a radical who supported pacifism and atheism. Even then, however, he had some affinity for dualism, and this may have influenced his interest in psychical research. As a philosopher, he was eclectic, widely read, and a clear writer whose books were popular with the general public. He was a socialist and strong supporter of both the Fabian Society and the Federation of Progressive Societies and Individuals, becoming became president of the latter organization in 1933. After 1941, he focused on popularizing philosophy through the Brain Trust radio broadcasts. Audiences were impressed by his clarity, although his political radicalism alienated some, especially his strong support for the Soviet Union in 1941 in the face of Stalin’s show trials and purges of the 1930s.1

Despite the atheism of his early period, Joad was not a materialist. In his middle period his thought tended toward the Platonic—he believed in the existence of objectively real moral values, for example. They function for Joad in a similar way to the Platonic Forms, and he accepts the full reality and mind-independence of the old Medieval transcendentals of Truth, Beauty, and Goodness.2  He was also more open to the possibility of God’s existence during this period of his career. In his final period of work he became a theist, a viewpoint he defended in his book, The Recovery of Belief: A Restatement of Christian Philosophy.3

Joad’s work in psychical research was in the context of his association with Harry Price, who founded the National Laboratory of Psychical Research, later called the University of London Council for Psychical Investigation. In his article ‘Adventures in Psychical Research’, Joad argues for the careful nature of the team’s investigations, noting both the diversity of the staff (which included illusionists as well as psychologists and physicists) and the equipment used to help detect fraud, especially in mediumship research. The team would go so far as to dress mediums in silk sacks up to their heads or in a full coat-of-arms.4 He notes that under stringent conditions very few mediums produce phenomena. However, he states that he witnessed some instances in which genuine phenomena occurred.

Joad believes that the evidence for the phenomena of physical mediumship and for poltergeist phenomena is stronger than the evidence for telepathy, clairvoyance, or precognition. He argues that the ‘triviality’ of the phenomena in séances (‘tambourines rattle, wastepaper baskets fly through the air, handkerchiefs tie themselves into knots,’ etc.) ‘constitute one of the strongest reasons for regarding such phenomena as genuine’.5 Joad believes that a skilled medium would make up more sophisticated phenomena. He denies that such phenomena are caused by any form of ‘collective unconscious’ and holds that the view that physical phenomena are caused by spirits is ‘probably false.’6 He concludes that physical phenomena result from multiple types of currently unknown causes.

Joad has mixed views about ‘ectoplasm’; while he had seen instances of it forming into shapes of human heads, one medium, Helen Duncan, was charged with faking the phenomenon by regurgitating cheesecloth she had swallowed earlier. He is more convinced regarding the genuineness of poltergeist phenomena.

Regarding putative evidence of survival, the triviality of putative messages from the dead makes Joad skeptical of most mediumship. Convincing proof, in his view, would come if someone left a code to be deciphered after death, and a medium then received a veridical message containing the code.

Joad was aware of JB Rhine’s experiments, but notes that attempts to replicate the experiments in Britain failed. He believes that Rhine’s results were more likely produced by ‘hyperaesthesia’ rather than by ‘telepathy or clairvoyance’.7 He accepts the existence of telepathy and clairvoyance, but thinks they rarely occur.

Joad suggests that psi may be largely due to what he labels as ‘the psychic factor’, which he believes is – along with the body – a constituent of the mind. However, he denies that the psychic factor is ‘mental’; rather, it is similar to a ‘vital force’.8 He suggests it might briefly survive the death of the body, and during that time be open to union with another body. A medium’s ‘psychic factor’ may leave the medium’s body during a séance, leaving it open to combine with a deceased person’s psychic factor. In the case of poltergeist and some apparitional phenomena, Joad suggests that a deceased person’s psychic factor may combine with matter other than a human body, and use that matter to manifest itself to the senses.

Joad mentions what today would be called near-death experiences, including ‘fear-death experiences’ in which a person threatened by imminent death sees his whole life ‘pass in front of him in a flash’.9 He believes this may be caused by the psychic factor sensing the onset of the event, and using expanded powers that it does not use ordinarily need in everyday life.

Joad, C.E.M. (1951). The Recovery of Belief: A Restatement of Christian Philosophy. London: Faber and Faber.