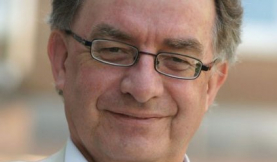 Chris French is a British psychologist working at Goldsmiths, University of London, and a prominent psi sceptic. French frequently appears in the media as a critic of psychic claims, but has also carried out laboratory psi research.

Professor Chris French is head of the Anomalistic Psychology Research Unit (APRU) in the psychology department at Goldsmiths, University of London. He is a fellow of the British Psychological Society and of the Committee for Skeptical Inquiry and also a patron of the British Humanist Association. He has published over 150 articles and chapters covering a wide range of topics. His research focus is centred on the psychology of anomalous experiences although he has investigated psi in the laboratory, on topics such as sleep paralysis, false memories, eye-witness testimony, paranormal beliefs and magical thinking.

French first encountered psychic claims while giving adult education classes, researching subjects requested by his class that sometimes included astrology and ESP. Initially inclined to give some credence to such things, he became more sceptical after reading James Alcock’s Parapsychology: Science or Magic (1981), books by James Randi and Skeptical Inquirer.1 Despite his scepticism, French says he maintains as an open mind as much as possible and encourages this mental set among his students.

Wilson and French utilized conjuring to test the effects of suggestion, social influence, and paranormal belief on the accuracy of eyewitness testimony, in this instance a supposedly paranormal event involving a fake psychic. Participants watched a video of ostensible paranormal metal bending. Half the participants heard the fake psychic suggest that the key continued to bend after the metal bending exercise and the other half did not. Additionally, participants were accompanied by a stooge who either made suggestions that the key continued to bend or suggestions that it didn’t. Wilson and French found that participants who were exposed to the positive verbal suggestion from the fake psychic were significantly more likely to report continued key bending than those who were not exposed. Also, more participants reported that the key continued to bend when in the presence of the positive stooge than when they were in the company of the negative stooge. Lastly, believers in the paranormal were much more likely to report continued key bending than non-believers.3

French and colleagues reviewed studies that indicate that haunted locations in which people feel strange sensations, or experience auditory or visual hallucinations, record very high electromagnetic field and infrasound readings. In order to probe these accounts under controlled conditions, French designed the ‘Haunt’ project, in which an attempt was made to construct an artificial ‘haunted’ room by systematically varying the environmental conditions. Seventy-nine  participants were instructed to spend 50 minutes in a specially constructed chamber, in which they were exposed to infrasound and/or complex patterned electromagnetic fields (the kind thought to bring on weird experiences), or to neither (control condition). Participants were advised in advance that they might experience anomalous sensations and were told to record where and when these occurred. On leaving the room, they were invited to undergo personality and belief scales, one purpose of which was to uncover signs of historical excitability in the temporal lobes – an area of the brain previously associated with paranormal experiences. Many reported anomalous sensations of various kinds: the frequency and type were unrelated to experimental condition but were related to the temporal lobe questionnaire scores. French concludes that suggestion is a more parsimonious explanation than environmental influence for his experimental results, and most likely also for the results reported in the review.5

French hypothesized that believers would be more susceptible to misinformation given in a psychic reading than disbelievers. To test this, he arranged for 40 participants to watch a video of an alleged psychic giving a reading to a client, followed by two versions of a discussion about it by client and psychic. In one version, the client accurately recalls an item of information from the psychic; in the other, the client inaccurately recalls the item. In fact, both the reading and the post-reading interviews were scripted: the only difference was the item of correct/incorrect information. Participants’ level of belief in the paranormal and recall of the reading were assessed. Analysis showed that believers’ recall of the readings was generally poor for both the accurate and inaccurate post-readings. Non-believers remembered the reading quite accurately when not exposed to misinformation, but their recall was as poor as that of the believers when exposed to misinformation.6

French and colleagues summarised previous research showing that people who report contact with aliens appear to have a different psychological makeup compared to control participants. In particular, they show higher levels of fantasy proneness, dissociation, absorption and paranormal belief. Most tellingly, alien contact experients appear to show greater susceptibility to false memories. French reports an attempt to replicate these previous findings from a sample of 19 UK based experiencers and 19 matched control participants who reported no such experiences. Additionally, French looked for proneness to hallucinate and sleep paralysis. French found that alien contact experiencers were found to show higher levels of the above psychological anomalies including increased hallucinations and sleep paralysis. No significant differences were found between the groups in terms of susceptibility to false memories.7

In order to understand the factors underlying precognitive dreaming, French and colleagues arranged for 386 participants to be interviewed about their experience of dreams that seem to predict an event in the future, and then their belief that this ability could be explained normally or paranormally. They found that those experients who believed their precognitive dreams could only be explained paranormally made significantly more errors of judgment on a probability estimation task involving guessing lottery outcomes than those who had precognitive experiences but who explained their experiences normally. French and colleagues interpreted this result as supporting the misattribution hypothesis for positive precognition experiences.8

French attempted a replication of Suitbert Ertel’s successful ‘ball selection’ ESP test, in which an experimental participant draws ping pong balls from an opaque bag one by one, trying first to guess the colour and number assigned to it. A total of ten alternatives gives a 10% probability of a correct guess occurring by chance. Ertel, a German psychologist and statistician, had achieved astronomically significant results in his own laboratory research. The replication at French’s laboratory was conducted by two graduate students working under French’s guidance. The overall scoring rate achieved by 40 unselected student participants was 10.75, which although only marginally above the chance rate, over a large number of trials was statistically very significant (p = 0.002), indicating, to French’s surprise, that the method is a robust test for demonstrating psi.9

In 2011, American psychologist Daryl Bem10 reported highly sigificant results of experiments that were based on standard psychology protocols and appeared to support the existence of precognition. French and two collaborators ran three pre-registered independent attempts aiming to replicate these, in particular the ‘retroactive facilitation of recall’, which examined whether performance on a memory test can be influenced by a post-test exercise. French reports that all three replication attempts involving 150 test subjects failed to produce significant effects (combined p  value =  0.83, not significant), and concluded the results did not support the existence of psychic ability.11

Talks given by French available online: