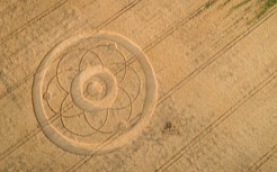 The intricate patterns that sometimes appear spontaneously in crop fields have been attributed variously to human hand, freak weather phenomena, ley lines, contacts with spirits, and visitations by extra-terrestrials.

Crop circles are found in mature crops, mainly wheat and barley but also in less common crops such as flax and natural vegetation such as bracken. Stalks are found to have been bent at the base, then swirled and flattened in a spiral pattern. The disturbed area is usually geometrically precise, in the shape of rings, ovals. Complex formations such as the Mandelbrot design and pictograms are also found. More rarely, similar patterns have been found imprinted in snow and ice.

An early reference to what is seen by some as a type of crop circle is a woodcut illustration in The Mowing-Devil; or Strange News out of Hartfordshire, a 1678 pamphlet. However, this is unlikely to bear any relation to the modern phenomenon: the text concerns a farmer who makes a deal with the Devil to mow his field. German folklore tells of crop circles made by fairies (fairy rings), probably caused by fungi growth.1

The storms about this part of Surrey have been lately local and violent, and the effects produced in some instances curious. Visiting a neighbour's farm on Wednesday evening (21st), we found a field of standing wheat considerably knocked about, not as an entirety, but in patches forming, as viewed from a distance, circular spots. Examined more closely, these all presented much the same character, viz., a few standing stalks as a center, some prostrate stalks with their heads arranged pretty evenly in a direction forming a circle round the centre, and outside these a circular wall of stalks which had not suffered.3

The earliest photograph of a circle is thought to be one seen in Bow Hill, near Chichester in 1932, described by archaeologist Eliot Cecil Curwen as one in which the barley was ‘lodged’ or ‘beaten down’.4

In a letter to Fortean Times, David Wood reported that in 1940 he and some friends marked out patterns in standing cereal crops ‘by running around in them’; one of them then hit on the idea of making circles and other shapes using a length of rope.5

During the 1960s, the county of Wiltshire in southern England was the site of alleged UFO sightings. In the following decade the area became a the principal site of crop circles.

In the early 1980s the number of circles increased dramatically, with 112 reported in 1988; 305 in 1989 and almost 1000 in 1990. Different shapes, pictograms and exotic designs were produced, notably in Wiltshire and Hampshire, with marked clustering near Westbury, Winchester and the Avebury area. The circles grew in size, sometimes with smaller rings attached. Other symmetrical shapes included triangles and scrolls and smaller circles, referred to as ‘grapeshots … strewn as though emanating from a randomized celestial twelve-bore’.6

Nineteen-ninety was an exceptional year for crop circles. A spectacular example 400 feet wide appeared in July in a field near Alton Barnes, Wiltshire, featuring five circles and shapes not seen before, including a dumb-bell and a skeleton key.7

Circles were also seen in locations nearer to London, and in other countries including the US, Canada, Hungary and Japan. As public interest grew, experts referred to as ‘croppies’ or ‘cereologists’ published books and articles proposing rival explanations.

Crop circles are generally unpopular with the farmers whose fields they damage. Matthew Williams was the first person to be arrested and fined for causing criminal damage, having made a crop circle near Devizes in 2000.8 However, circles located close to main roads have sometimes proved a profitable tourist attraction.

Many commentators believe that crop circles are manufactured for amusement, as a means to fool paranormal believers or to demonstrate artistic flair in public, akin to graffiti. Sceptics of paranormal interpretations point out that crop circles usually appear during the night and close to roads or tracks that provide access. Their appearance near cultural heritage monuments, such as Stonehenge, Silbury Hill and ‘White Horses’ (shapes etched in chalk hills) is also taken to be suggestive of human activity.

The phenomenon was treated sceptically by authors Paul Fuller and Jenny Randles.9 Fuller undertook a pilot study in 1986-7 to examine whether the apparent concentration of events in Hampshire and Wiltshire, and the growing elaboration of the phenomenon, might be due to the concentration of interested observers in that area, fuelled by media attention.

In 1991, Doug Bower and Dave Chorley claimed to have created approximately 200 circles since 1978, using a plank of wood, string or rope and a baseball cap fitted with a wire loop to help them to walk in a straight line.10 One of their circles, at Cheesefoot Head, Hampshire, could be seen from the road, leading to newspaper reports.11  This encouraged the perception that the hundreds of crop circles that followed were produced artificially.

Projects to create increasingly complicated circles under difficult conditions were instigated by publications such as the British daily newspaper The Guardian and PM, a German magazine. The results indicated that the phenomena could be created by human agency even in difficult conditions, especially with the help of technology such as lasers for measurement. When leading cereologists Pat Delgado and Colin Andrews maintained that the July 1990 ‘Etchilhampton Formation’ was created by alien visitors, its creator Mike Jay assured them that he had made it himself.12

Design methods vary, but typically start with a stake with a rope attached being driven into the ground at the centre of the planned circle. At the end of the rope, at a distance previously decided upon, a person walks around the stake at the circle’s perimeter. The crop can be pressed down by foot pressure on wooden boards, or with a small garden roller.13

In 1991, Juniper Television’s Equinox programme broadcast its investigation of crop circles. An example created for the programme by local sceptics was shown to leading members of the Centre for Crop Circle Studies (CCCS), Busty Taylor and Terence Meaden, who believed it had non-human origins.

The following year Rupert Sheldrake and John Michel organized a circle-making competition in West Wycombe, Buckinghamshire, offering a prize of £3000 for the best result. A design that was generally agreed to be difficult to achieve was given to the twelve teams in advance, with access to their plots allowed only between 10pm and 3am. The prize was won by three Westland Helicopters engineers, who used a rope, PVC pipe, a plank, string, a telescopic device and two stepladders. They reproduced their design the next day to reveal how they made it.14

Even highly complex designs can be created by human hand, as this description attests:

In 2009 a crew from National Geographic television challenged a group of artists called the Circlemakers to reproduce a highly-complex pattern designed by a professor of mathematics at the Imperial College of London. The formation, based on the Circles of Apollonius, required making over eighty circles of various sizes in exacting locations across the field. The group had to do this in a single night, arriving after dark and leaving before sunrise. Though the work took most of the evening, the Circlemakers were able to complete the complex diagram without mistakes, demonstrating that even the most complex formations can be made by a group of dedicated workers in just a few hours.15

Believers in a non-human agency maintain that while many circles are clearly fashioned by hand, it does not follow that all circles are produced in this way, especially as, in their view, some are too large and intricate to have been crafted in darkness. As an example, researcher Andy Thomas cited a circle that appeared near Stonehenge in 1996, 915 feet length and made up of 151 separate circles.16 Thomas also quoted eye-witnesses who claimed to have seen crop circles being made amid anomalous lights and electrical disturbances.

Believers in a paranormal origin claim that

New Age groups and others have linked crop circles with ley lines and spirit contact.18

George Meaden, a meteorologist and physicist, explained crop circles in terms of atmospheric physics, as the effect of a plasma-vortex.19 Meaden likened the phenomenon to ball-lightning, but larger and longer-lasting. He expanded his theories in later research to include ionisation and electromagnetism.20 Physicist Stephen Hawking appeared to give credence to this view, writing in 1991 that corn circles are either hoaxes or formed by vortex movement of air.21

Meaden’s ideas were taken up by Ralph Noyes, a senior Ministry of Defence official and an expert in UFO phenomena, who wrote:

If Meaden is right, our atmosphere is sometimes able to produce a short-lived but vigorously swirling disturbance with strong electrical properties. A layman grasps after the analogy of something between ball-lightning and a mini-tornado. Depending on conditions, this transient energy-form can manifest as a globe of light, often with associated sounds. It may be able to interfere with the ignition system of automobiles and perhaps to affect close witnesses. Descending to earth, it can make a cropfield circle. Acting more vigorously it may well cause more violent circular damage at ground level. In short, a good meteorologist whose sole concern has been to investigate cropfield circles has ended by describing much of the UFO phenomenon!22

Underground water has been suggested, by dowsers and others, as a possible source for crop circle activity. Colin Andrews likened this to a dynamo that caused the crops to collapse from the effects of an ‘electro-static field’.24

The proliferation of circles in areas where UFO sightings are common has encouraged the belief that the circles are created by alien visitors.25  It is claimed that the creation of the circles involves brief intense bursts of low-level radiation, traces of which remain and can have effects on visitors to the site, including ‘nausea, headache, feelings of fear or anger, tingling sensations, pain and an awareness of some unusual type of energy’.26 American researchers claim to have found abnormalities in soil and plants from English crop circles, that appear to indicate the existence of short-lived radioactive isotopes of a type not present in the surrounding soil of the same fields.27

Pilot Doug Ruby suggested the circles were the result of 2D representations of a propulsion system spun at high speeds to produce ‘energy fields’, whether originating from the military establishment or alien visitors.28

Keen, M. (1994). An overview of Crop Circles: Essay review of Jim Schnabel’s Round in Circles. Journal of the Society for Psychical Research 59.

Noyes, R. (1990). Book Review: The Circles Effect and its Mysteries. Journal of the Society for Psychical Research 56.

Schnabel, J. (1993). Round in Circles: Physicists, Poltergeists, Pranksters, and the Secret History of the Cropwatchers. London: Hamish Hamilton. 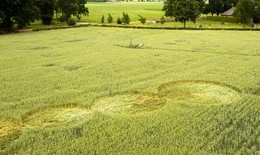 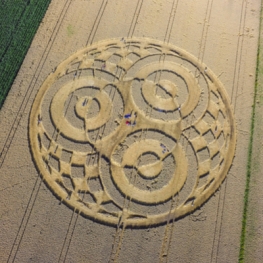