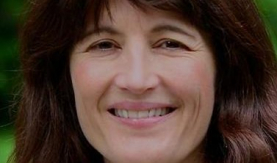 Diane Hennacy Powell is a practising psychiatrist with training in neurology and internal medicine. Her research interests include psychic abilities in autistic savants. She is author of The ESP Enigma: A Scientific Case for Psychic Phenomena (2009).

Diane Hennacy Powell trained in neuroscience at Ohio State University and Johns Hopkins University and obtained a medical degree and training in medicine, neurology, and psychiatry at Johns Hopkins University. She subsequently joined the faculty of Harvard Medical School. She has spoken at international conferences such as the annual conferences of IONS, the Parapsychological Association, and Towards a Science of Consciousness. Her research findings and hypotheses about the brain and psi are published in Mindfield, EdgeScience and in her book The ESP Enigma: A Scientific Case for Psychic Phenomena (2009).

Powell notes that the anomalous abilities of autistic savants share intriguing parallels with psi phenomena, and is currently  investigating savants who also report psi experiences. She is collaborating with her brother, theoretical physicist and artificial intelligence expert Ken Hennacy, PhD, to create a model for understanding consciousness and the quantum world.

Powell is a signatory of a manifesto for a Post-Materialistic Science, together with Gary Schwartz and other active figures in parapsychology and frontier science.

A major part of Powell’s psi research program explores the potential telepathic abilities of autistic children. Savant skills, which are displayed by a significant minority of such children, demonstrate an ability to acquire knowledge and/or abilities without having either any exposure to them or the necessary skills. Powell and others have argued that such abilities support the contention that savant skills are actually a manifestation of underlying psi ability, which also entails acquisition of information that should otherwise be unavailable. She has focused on reports of telepathy in non-verbal autistic children who may employ telepathy as a default mechanism for communication. A strong desire to communicate with caregivers, combined with the severely disrupted language development seen in nonverbal autism, could lead them to use telepathy as a potential and alternative avenue.

In 2013, Powell travelled to India to evaluate autistic savants whose parents reported that, in addition to other savant skills, they were ‘precognitive’ and ‘telepathic’, obtaining significant results in informal conditions. Between 2013 and 2018, she tested three children in the US under controlled conditions, employing randomized words, letters, numbers, and pictures. The children’s answers were ‘astoundingly accurate’, although the sub-optimal protocol caused by filming constraints discouraged strong conclusions. Following publicity of the investigations, Powell has been contacted by dozens of parents and clinicians from around the world who have attested to potential telepathic communications with autistic children.

Despite the obvious parallels between autistic savant skills and psi ability, there has been no formal research in the area. In 2013, Powell received three homemade videos that appeared to show telepathic ability in a non-verbal nine-year-old autistic girl – Haley. This led to controlled sessions being carried out with Haley, each with a therapist involved with her care. Randomized numbers, sentences, fake words, and visual images were presented to the therapist out of view of Haley, who was asked to ‘read the therapist’s mind’. The therapist was asked to write verbal descriptions of the images that could be compared to Haley’s answers, which were registered by means of a pointer and letter stencil. Additionally, random numbers were generated for mathematical equations. Using time synchronized and time-stamped cameras, as well as several microphones, Haley achieved astounding hit rates, sometimes achieving 100% accuracy with image descriptions that contained up to nine letters. She was also extremely successful at picking up the numbers used during the equations testing.1

Autistic children are extremely sensitive to changes in environment, requiring Haley to be tested in the same room as the therapist, with a divider between them. Powell is seeking funding to continue this work under conditions that would totally eliminate cueing, situating the therapist and child in separate rooms under blinded conditions. She plans also to use Quantitative Electroencephalography (QEEG) to investigate changes from baseline in brain activity in therapists and/or parents and their children during periods of highly accurate ESP activity.2

The placenta contains not only concentrate nutrients but also toxic materials ingested by the mother, which means it can deliver dangerous levels of organic compounds and heavy metals to the foetus. Powell is encouraging aspiring mothers to get tested for toxins and undergo evidence-based therapies for detoxing, such as taking binding agents and using infrared saunas. This would improve the life chances of babies and reduce the incidence of certain cancers and auto-immune disease in the mothers.4

Powell is collaborating with other experts in establishing centres-of-excellence throughout the US for diagnosing and treating autism, including the latest brain mapping technology and knowledge about the microbiome and gut-brain connection.5

The ESP Enigma: The Scientific Case for Psychic Phenomena (2009) gives an overview of the major classes of experimental evidence for psychic functioning.  Powell describes the pattern of brain activity that appears most conducive to psi, being found in dreaming sleep, autism, and other conditions/disorders with the highest reports of psi. She argues that the mainstream ‘brain equals mind’ model is inadequate to explain data already accepted by science, such as savant syndrome, and as an alternative posits a ‘consciousness equals field’ model.6