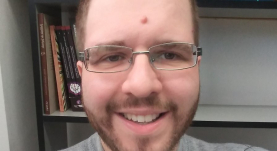 Everton Maraldi is a Brazilian psychologist with research interests in the psychology of religious experiences, spirituality, religion and health.

Everton Maraldi is professor of the post-graduate program in religious studies at the Pontifical Catholic University of São Paulo, Brazil. He was a postdoctoral research fellow at Coventry University (Brain, Belief, and Behaviour Lab) and University of Oxford (SCIO—Scholarship and Christianity in Oxford), UK. He is a member of the board of directors of the Parapsychological Association (USA). He has a bachelor’s degree in psychology from Guarulhos University, as well as master's and doctorate degrees in social psychology from the Institute of Psychology of the University of São Paulo.

Maraldi’s research interests focus on the psychology of religious experiences, spirituality, religion and health. More specifically, his investigations revolve around topics such as dissociation and dissociative disorders; trance and dissociation in religious contexts; anomalous experiences; and historical approaches to psychological and psychiatric studies on religion and the paranormal. This article reviews some of his main publications.

Maraldi and Krippner carried out a multi-method investigation of the mediumistic painting activity performed by Jacques Andrade, a Brazilian medium. The authors evaluated the quality of Andrade’s pictorial production, his state of consciousness during mediumship practice, and his psychological and social profile. Data about the medium were collected on different occasions between 1998 and 2013, and included psychophysiological measures (hand temperature, heart rate, bilateral skin conductance, muscle tension, and electrical brain activity), psychological measures (Dissociative Experiences Scale, Tellegen Absorption Scale, Revised Transliminality Scale, and Childhood Trauma Questionnaire), artistic material, observational data (photographs of paintings, observations of the medium in action), and some basic socio-demographic and biographical information. To integrate these findings, the authors propose a biopsychosocial approach to the study of what they called creative dissociation (that is, dissociation specifically related to creative and artistic elaborations). They also discuss how the study of creative dissociation could illuminate the aetiology of normal and pathological dissociative processes.3

In a qualitative study with 11 mediums, Maraldi explored further the relations of mediumship and creative dissociation. He found that mediumistic practices of an artistic character might serve as creative coping strategies in opposition to suffering and low self-esteem. They might also help mediums to psychologically elaborate diffuse or impulsive emotions experienced in early childhood.4

To further explore the dissociative nature of mediumistic experiences, Maraldi, Ribeiro and Krippner reviewed the evidence pertaining to both psychiatric and anthropological investigations of mediumship and dissociation carried out in Brazil and abroad. The wider goal was to illustrate how group and cultural differences impact the nature of mediumistic experiences. They explored the differences that exist between mediums from the same religious affiliation, and between mediums from different affiliations, and lastly between mediums from different cultures – in this case the UK and Brazil. They argued that mediumistic experiences are too variable to be treated as a monolithic phenomenon. They went on to challenge the standard biomedical model, pointing out the complex and diverse nature of these experiences.5

Maraldi coordinated a qualitative study which explored the phenomenological characteristics of anomalous experiences (AEs) reported during rituals in Umbanda (a mediumistic Brazilian religion). The aim was to compare AEs reported during rituals involving the use of Ayahuasca (an entheogen frequently used in Umbanda contexts) and rituals without this substance. They compared individuals with different levels of involvement with the mediumistic practices. The results suggested a significant similarity between the experiences reported with and without the use of Ayahuasca in mediumistic rituals. In both groups, the experiencers were able to identify similarities in their experiences regarding a reduction of voluntary motor control, changes in memory and perception, communicability and accessibility of experiences, anomalous information reception and increases in interpersonal sensitivity.6

Despite the ever-increasing research demonstrating correlations between dissociative, religious and paranormal experiences, little work on this has been done in Brazil.  Maraldi and Zangari describe the results of study involving 1,450 survey respondents. This included survey data from mediumistic religions, esoteric groups, and spiritual individuals with no defined membership. Individuals in these groups did not vary on cognitive dissociation (including variables such as absorption, depersonalization, and dissociative amnesia), but scored above atheists, agnostics, Catholics and Pentecostals. Interestingly, mediumistic religions showed significantly higher scores in somatoform dissociation (bodily manifestations) compared to the other groups. Members of esoteric groups (such as Theosophists and Rosicrucians) evidenced the highest score on the Dissociative Experiences Scale.7

Maraldi took part in a large group investigation of the validity of a standard measure of transliminality (the ease with which information enters consciousness from the internal and external environment) across different cultures. He and co-workers administered a Portuguese version of the Revised Transliminality Scale (RTS) to an online sample of 341 university students, starting with those at the Institute of Psychology of the University of São Paulo. They found that the Brazilian measures correlated nearly perfectly with the estimates derived from earlier research. A few differences related to age and sex were obtained, but these did not appreciably affect the estimates of overall transliminality levels. Maraldi and co-authors concluded that the research supported the robustness of current transliminality measurements, and served as a guide to advance further cross-cultural research into understanding transliminality.8

Maraldi and Farias note a growing interest in the study of the underlying cognitive processes powering New Age and paranormal beliefs (NAPBs). Unfortunately, there is a paucity of research in non-Western populations. The sample in this study consisted of 615 Brazilians who were tested with a new measure developed by Maraldi, the NAPBs Implicit Association Test (IAT), which measures implicit associations towards paranormal beliefs. Maraldi found that the NAPBs-IAT correlated positively with a self-report scale of NAPBs and of spiritual practices and this relationship was even stronger than with Western populations (p = 0.001). Most importantly, the new test could discriminate between believers and skeptics.9  In contrast to some investigations with Western populations, the implicit measure of NAPBs showed a significant association with the Revised Paranormal Belief Scale (used as an explicit, self-report measure of NAPBs), which suggests that the explicit endorsement of NAPBs is not inconsistent with implicit associations, and that implicit-explicit correlation patterns for measures of religious and spiritual beliefs may differ across cultures.

Although a significant body of research describes the psychological benefits of religious and spiritual practices, little of it tries to understand the mechanism at work in improving mental health. Maraldi cautions that although some research indicates a causal relationship between spiritual practices and good mental health, a more prosaic explanation could be methodological shortcomings such as response bias: those who engage in such practices might be more inclined to overrate their mental health in order to satisfy stereotypes or the perceived expectations of the researchers. His review of the literature indicates that the positive relationship between religiosity and social desirability appears relatively weak and can be interpreted in ways that do not involve distorted or biased responding. Still, few investigations addressed the problem of response bias, which include other factors beyond social desirability, such as experimenter and cultural biases. Maraldi argues that response biases should be more fully addressed in future research before drawing firm conclusions regarding the impact of spiritual practices on mental health or any casual influences.10

Maraldi argues that spirituality has a larger significance than the focus on mental health and wellbeing usually observed in the psychiatric and psychological literatures. He proposes to define spirituality mainly in terms of individual religiousness and a secularized search for transcendence, independent of wellbeing and mental health. Maraldi presents data from a survey he carried out with Brazilian respondents indicating that people who define themselves as ‘spiritual, but not religious’ are similar to religious participants in their perspectives on spirituality, despite presenting low church/ritual attendance when compared to religious believers. Self-proclaimed atheists considered themselves significantly more as non-spiritual and defined life as meaningless; however, they usually reported fewer psychopathological symptoms. These findings suggest that spirituality is not necessarily a matter of wellbeing, and its relationship with mental health may be more complex than usually portrayed. Spirituality may sometimes involve therapeutic benefits, but challenges and difficulties also constitute an essential part of the spiritual growth process. Maraldi emphasizes the need for an ethical framework for any psychological therapy and connects the spiritual growth process to the Jungian concept of individuation.11

Another of Maraldi’s research interests concerns the history of psychological and psychiatric studies on religion and the paranormal. Maraldi, Alvarado and others review the contributions of Swiss psychologist Théodore Flournoy (1854–1920) to psychical research. Chief among these is the classic investigations of the trance medium Hélène Smith. Detailed discussions can be found in a paper by Maraldi and Alvarado published in the journal History of Psychiatry12 and also in the Psi Encyclopedia.13 Flournoy also investigated physical mediums, telepathy and precognition.14

Maraldi, E., Farias, M. (2019). Assessing Implicit Spirituality in a non-WEIRD Population: Development and Validation of an Implicit Measure of New Age and Paranormal Beliefs. International Journal for the Psychology of Religion. 10.1080/10508619.2019.1661198.

Maraldi, E. O., Farias, M. (2020). Assessing Implicit Spirituality in a non-WEIRD Population: Development and Validation of an Implicit Measure of New Age and Paranormal Beliefs. The International Journal for the Psychology of Religion 30/2, 101-111.