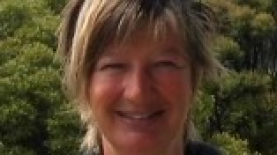 Fiona Steinkamp is a philosopher who has carried out psi research in Germany and Britain, principally on mind-matter effects and precognition.

Fiona Steinkamp gained her PhD in continental philosophy from the University of Dundee in 1991, then joined Edinburgh University’s Koestler Parapsychology Unit (KPU) in 1995 as a research fellow. Her original remit was to examine the concept of ‘will’,1 but subsequently obtained funding to a focus on understanding the nature of precognition. To do so, she utilized several approaches including surveys,2 experiments and reviews of the experimental evidence.

From 1999-2001 Steinkamp accepted an invitation to join the Institut fuer Grenzgebiete der Psychologie und Psychohygiene (IGPP) in Freiburg, Germany. There she worked with Holger Boesch and Emil Boller on a large meta-analysis of mind-matter effects on random number generators (RNG). She then returned to the KPU,  funded by several prestigious bodies including the Bial Foundation, and the Perrott-Warwick fund.

From 2003, Steinkamp worked as a medical writer and then as a publications manager for a major pharmaceutical company.

By 2006, a large number of experiments investigating possible psychokinetic effects on the behaviour of random number generators had been published and reviewed in two major meta-analyses – both of which arrived at positive conclusions with astronomically significant effects (p = 10 x 10-35).3 Steinkamp contributed to a third meta-analysis (Bösch, Steinkamp and Boller) which was published in the Psychological Bulletin in 2006.4 This found a greatly reduced overall effect size (p = 10 x 10-4). The authors also claimed to have found evidence of possible selective reporting, which, when taken into account, would nullify even this level of significance.

This finding was criticized in a paper the same year by Radin, Nelson, Dobyns, and Houtkooper5 and others.6 They pointed out that the authors had confirmed many of their own findings, namely, that existing studies provide statistical evidence for psychokinesis, that the evidence is generally of high methodological quality, and that effect sizes are distributed heterogeneously. They attributed the authors’ assertion that the heterogeneity is caused by selective reporting to a misunderstanding. They write:

Bösch et al. assumed that effect size is entirely independent of sample size. For these experiments, this assumption is incorrect; it also guarantees heterogeneity. The authors maintain that selective reporting is an implausible explanation for the observed data and hence that these studies provide evidence for a genuine psychokinetic effect.

Bösch, Steinkamp, and Boller replied7 that they took into account the concerns raised by Radin, Nelson, Dobyns, and Houtkooper of the possible effects of psychological moderator variables, the potential for missing data, and the difficulties inherent in any meta-analytic data, but reaffirmed their original view that publication bias was the most parsimonious explanation, cautioning that this will always be the case until preregistration of parapsychological experiments becomes commonplace. In recent times such preregistration initiatives have been launched.8

Testing for true precognition is complicated by real-time psi explanations for positive findings, one of which is psychokinesis, in which targets are influenced rather than predicted. Steinkamp conducted a series of experiments aimed at isolating any true precognition effect. The first, carried out by post with subjects in their own homes, and reported in 1999, examined whether true precognition is possible by comparing two conditions: one testing for clairvoyance, the other precognition. In the clairvoyance condition, targets were selected by a pseudorandom number generator before subjects did the trials. In the true precognition condition, targets were selected using an algorithm based on stock market indices and temperature values at a specified future date. Steinkamp argues that it would be difficult for participants to use psychokinesis to influence the behaviour of the stock market, given potential competing intentions by investors to maximise returns. Importantly, participants were guessing at targets without knowing which condition – precognition or clairvoyance - they belonged to, in order to remove any expectancy effects from biasing the results. Overall there was a significant effect in the clairvoyance condition (p = 0.04) but only chance was found to be operating in the true precognition condition.9

A follow-up study conducted in the lab gave almost significantly high scores in the precognition condition but only chance scores in the clairvoyance condition. A third study conducted online gave a nearly significant psi-missing effect in the precognition condition but chance results in the clairvoyance condition.10 A replication of the original postal experiment,11  this time carried out in the laboratory, was also at chance, despite participants being given a recorded relaxation session to try to facilitate a psi-conducive state of consciousness. Furthermore, participants who reported having had psychic experiences did not perform any better than those claiming no such experience. Steinkamp concludes, ‘It appears that either postal experiments are not suitable for eliciting evidence for true precognition, or, if true precognition is possible, it can occur only with a much shorter precognitive interval than these experiments have allowed.’  Overall, the four studies gave little support to the existence of true precognition.

Steinkamp, Dalton and Sherwood acted as participants in a dream-ESP study in which video clips as target material were chosen over 32 trials using an automated free-response testing system. Video clips, having been randomly selected, were run during the night, and subjects returned to the laboratory the next morning to rank their dream mentation for matches. Clips were ranked from 1 to 4, with 1 representing the greatest degree of correspondence with dream imagery: a direct hit was considered to have been achieved if the target was ranked first. It was hypothesized that group decisions would be more successful than individual performance and that low geomagnetic activity would predispose to higher scoring.  Overall, the group achieved a significant hit rate of 15 direct hits out of 32 trials (p = 0.005). Two of the three participants obtained significant scoring of 13 direct hits out of 32 trials. Trials conducted during low geomagnetic activity were more favourable to psi scoring but this failed to reach significance.12

A replication study explored the influence of target emotionality and differences between the group and individuals. Three experimenters again acted as participants, two located in Edinburgh, the third in Derby.  Over 28 nights, a randomly-selected video clip was shown repeatedly in the early morning to a sender located in the lab. The following morning the participants viewed four video clips – one of which was the target – and then judged the degree of similarity between the clips and their dream mentation. As with the first study, group judging (p = 0.029) was more successful at identifying the target than individual attempts (p = 0.068). Emotionality was also found to have an effect on scoring for individual and group efforts, with a greater proportion of direct hits associated with negative valence rather than positive or neutral targets.13

Steinkamp, F. (ed. and Trans) (2002). Clara. Or, On Nature's Connection to the Spirit World, by F. W. J. Schelling. Edited and with an introduction by Fiona Steinkamp. Albany, NY: State University of New York Press.

Steinkamp, F. (2002). Parapsychological phenomena and the sense of self. Chapter in F. Steinkamp (ed.) Parapsychology, Philosophy and the Mind. A Festschrift in Honour of John Beloff's 80th Birthday. North Carolina: McFarland & Co.

Steinkamp, F. (1999b) Does precognition foresee the future? A postal experiment to assess the possibility of true precognition. The Journal of Parapsychology 63/3, 1999, 226.

Steinkamp, F. (2000). Acting on the future: A survey of precognitive experiences. Journal of the American Society for Psychical Research 95, 37-59.