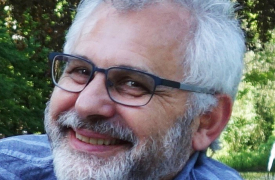 Gerhard Mayer is a German psychologist with a particular interest in cultural studies and interdisciplinary approaches relating to parapsychology and anomalistics. He is director of the Gesellschaft für Anomalistik, a German sister organization of the Society for Scientific Exploration, and chief editor of the peer reviewed Zeitschrift für Anomalistik.

Gerhard Mayer studied psychology, sociology, philosophy, and history of art at the University of Freiburg im Breisgau in Germany. He received his PhD in psychology in 2000. Since 1996 he has been working as a research fellow at the Institute for Frontier Areas of Psychology and Mental Health in Freiburg/Germany (IGPP). His research interests include media research, neoshamanism, magical practices, biographical importance and integration of extraordinary experiences, sleep paralysis, astrology, and methods of anomalistic research. He is the author of several books and co-editor of the German handbook An den Grenzen der Erkenntnis. Handbuch der wissenschaftlichen Anomalistik (Stuttgart: Schattauer, 2015).

Mayer’s PhD thesis dealt with individual strategies in the reception of non-rational content in films (extraordinary events and experiences which cannot be explained by scientifically known natural laws) by young people, and of differences between horror fans and other young people. A part of a horror film was shown to 50 adolescent subjects in single sessions. The film was stopped at several points, and the subjects were asked questions about what they had just seen. More data was collected by the subjects filling out a questionnaire. Contrary to our expectations, horror fans do not have a specifically strong orientation to non-rational content in films. In addition, no significant correlation with the development of occult belief systems was found. Other elements such as aggressiveness and sexuality are more important. Furthermore, there seemed to be a relationship to the development of ego identity in the case of those liking the horror genre. These people had dealt thoroughly with their political beliefs and sexuality. However it was found that an orientation to non-rational content in films correlates with emotionality, a pessimistic attitude, and also with the development of occult belief systems, but has no relation to the development of ego identity.1

A second large project in this field was a longitudinal study of press reports on 46 different topics of anomalistics and the border areas of psychology (such as astrology, cults, hypnosis, parapsychology, poltergeists, and UFOs) in the influential German print media Der Spiegel, Bild and Bild am Sonntag. More than 2,600 articles have been analyzed with regard to their frequency, contents, and style. They were also examined for diachronic changes, covering the period from 1947 to 1999.

All three print media have a strong tendency to distort the facts: while Bild and Bild am Sonntag are eager to create ‘sensations’ of any kind, Der Spiegel tends to ridicule everything which is not in accord with the stereotypes and prejudices of the ‘rationalist’ common disbeliever.2

In a field study, Mayer carried out half-structured interviews with shamanic practitioners who offer such services, workshops and courses in German-speaking areas. They were asked about biographical issues, their experiences, the methods they apply and their beliefs. The observation and participation in various seminars and one shamanistic congress provided insight into the practice of neoshamanism as well as into the reception of shamanism in the German-speaking areas.3 Due to the widespread psychologization of shamanism, an overgeneralized and oversimplified view of traditional shamanism gives a matrix which creates the different popular conceptualizations of the figure of the shaman.

The Arcane World of Magicians

The second study consisted of depth interviews with persons who practice magical rituals. The subject focuses of these interviews were: (1) biographical embedding, (2) adaption of magical bodies of knowledge, (3) magical practice and forms of evaluation, (4) social milieu and magical networks, (5) world view, and (6) ethics and value orientation. A central finding was that no typical magician-personality could be identified. Common features of the male and female magicians are a strong individualism, premature occupation with ideological and philosophical questions, tendentially uncommon interests during adolescence, a moment of rebellion and non-adjustment (in different forms and to different degrees), as well as a fascination by the ‘hidden sides of life’, the borderlands of life and the ‘darker sides’ of existence. Furthermore personal evidence of experiences and events that seem to be only insufficiently explained by current scientific models, does also play an important role. From a perspective of differential psychology, Mayer worked out a dimensioning of the magician-personality. By means of the thereby deduced heuristic it is possible to identify the different approaches and motive-structures which are guiding the magic practice. Five typified aspects of the figure of the magician were worked out which have to be understood as mutually non-exclusive orientations of human agency and which can lead to magic practice as a form of acting: 1) the magician as an artist, the magician as a social-utopist, 3) the magician as a scientist, 4) the magician as a fully-functioning person, 4) the magician as a seeker of wisdom.5

The scientific study of astrology was a secondary theme of Mayer’s research activities, which he nevertheless continued for many years. He conducted, together with Martin Garms, an extensive study on astrological synastry, investigating if there are more interaspects between the charts of friends than expected by chance. Having gained interesting results with partially supporting evidence, but also with elements which did not support the hypotheses, the experiment was repeated with a second sample. It failed to replicate the results of the first experiment. Against the background of these results which were negative from the astrological perspective, the main conclusion concerned a better understanding of the complexity of the astronomical situation with regard to astrological investigation. It resulted in empirical evidence regarding the necessity to consider the inhomogeneity of the time scale (in an astrological sense). This was not considered sufficiently in previous studies which had a related approach. A new methodological approach to astrological research has been developed to address this problem.7

With the two-part essay ‘Astrology and Science: A Precarious Relationship’, Mayer illuminates the difficult relationship between astrology and science from different perspectives. While the first part provides a historical review of developments in the twentieth century in German-speaking countries, the second part concerns theoretical and methodological considerations for empirical investigations of the validity of astrology. During the twentieth century, astrology in the German-speaking world was influenced by a few people who pursued a special quest for connectivity with scientific findings and models as well as a natural philosophical foundation. This openness to scientific scrutiny, combined with a desire to replace old concepts based on magical-analogical thinking with those more compatible with scientific models, met the criticism of several astrologers in the 1990s. This led, besides general socio-cultural developments, to a change in the ‘astrology scene’.8

In Part 2 of the essay, the anomalistic aspects of astrology or astrological practice are attended to, with a distinction made between the above-below-theorem as the traditional basic assumption of astrology and possible psi phenomena that can occur in astrological counseling practice. Further sections describe problems in scientific studies on the validity of astrology. Such problems could have led to the failure of these efforts. Specific methodological problems in the investigation of the above-below-theorem and in matching tests are also addressed.9

Mayer’s interest in single case studies was aroused by his participation in the investigation team Task Force Grenzgebiete of the IGPP. He participated in the investigation of some cases of assumed anomalies. Single case studies have a long tradition in the field of parapsychology and anomalistics research. Although case studies do not usually provide hard evidence for the existence of paranormal effects, they demonstrate the dynamics of occurrence of such extraordinary phenomena and experiences in the living world. Thus, the focus of these examinations was not only on the question if the phenomena were genuine or not but also on the related psychosocial context. For a long period of time, single case studies in parapsychology and anomalistics have only been seen as illustrative or anecdotal. In recent years, the value of single case studies for gaining knowledge about anomalistic phenomena and the conditions under which they occur has been increasingly recognized with a wider acceptance of qualitative research methods in general.

Mayer’s own investigations, and his dealing with general research conditions in anomalistics, led him to edit a volume on the methodology and problems of single case studies in anomalistics. On the basis of historical and current case studies, specific psychosocial dynamics and problems in this interesting and challenging field of research are presented and discussed by various authors.10

Isolated Sleep paralysis (SP) is a phenomenon experienced during falling asleep or awakening. Persons concerned are in a conscious state while the whole body is paralyzed except for eye muscles and muscles of respiration. Additionally, extraordinary experiences often appear. Although sleep paralysis is an intercultural and quite frequent phenomenon, little is known about its prevalence, about coping with the associated extraordinary experiences, or about its clinical relevance in Germany.

As part of an ongoing project, Mayer, together with Max Fuhrmann, conducted an online survey to obtain information on the interpretation and biographical integration of the extraordinary experiences involved, as well as on fears and dangers of social stigmatization. A main difference to existing survey studies on sleep paralysis is the use of a selected sample. Each participant had to have at least one SP experience; this provides a much more differentiated picture of the phenomenology, because the number of participants with multiple experiences of SP is much higher than using a non-selected sample. The sample consisted of 380 fully completed questionnaires of experiencers. First descriptive results were presented on a poster at the 62nd Parapsychological Convention in Paris 2019.11

Mayer, G. (2008a). The Figure of the Shaman as a Modern Myth: Some Reflections on the Attractiveness of Shamanism in Modern Societies. The Pomegranate 10(1), 70-103.

Mayer, G. (2020a). Astrology and Science: A Precarious Relationship. Part 1: Historical Review of German Astrology in the 20th Century and Current Developments. Journal of Scientific Exploration (in press).

Mayer, G. (2020b). Astrology and Science: A Precarious Relationship. Part 2: Considerations on empirical investigations on the validity of astrology. Journal of Scientific Exploration (in press).

Mayer, G. & Gründer, R. (2011). The Importance of Extraordinary Experiences for Adopting Heterodox Beliefs or an Alternative Religious. Journal of the Society for Psychical Research 75/1, 14-25.

Mayer, G. & Garms, M. (2012). Resonance between birth charts of friends: The development of a new astrological research tool on the basis of an investigation into astrological synastry. Journal of Scientific Exploration 26/4, 825-853.