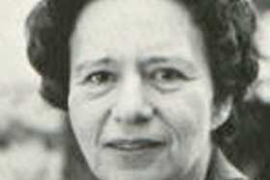 Gertrude Schmeidler (1912-2009) was an American experimental psychologist and parapsychologist, noted for her ‘sheep-goat’ theory that experimental subjects’ ESP ability relates to their belief or otherwise in the reality of psychic phenomena.

Gertrude Schmeidler was awarded a PhD in psychology at Harvard University in 1935. A lecture on ESP by Gardner Murphy set her on a new career path, and she was given funding to investigate the topic by Murphy himself. In 1947, Schmeidler obtained a professorship in psychology at City University, New York. There, she conducted numerous ESP and PK experiments aimed at understanding the sheep-goat variable, including a successful series with Ingo Swann. Many of her students’ degrees included work in parapsychology.

Beginning in 1942, Schmeidler tested the psi abilities of psychologists and students at Harvard. The test was a simple clairvoyance test in which participants guessed the sequence of closed packs of Zener cards placed in a separate room. Before testing, Schmeidler interviewed participants to ascertain if they were believers or disbelievers with regard to ESP. The former were termed ‘sheep’, the latter, ‘goats’. Schmeidler’s first experiment gave clear results: 46 sheep participants averaged 5.31 correct guesses where 5.00 is expected by chance (p = 0.001). Of particular note were the below-chance scores of the goats, suggesting they used ESP to avoid the correct targets and confirm their expectations.1

A further 14 experiments conducted between 1945 and 1951 gave similar results: sheep scored above chance, goats scored below. The accumulated results give extremely high odds against the sheep-goat effect occurring by chance (p = 10 x 10-8).2 3 4 5   Other researchers successfully replicated these findings.6

In the early 1970s, Schmeidler turned her attention towards understanding psychokinesis (PK). Working with the American Society for Psychical Research  she tested the PK abilities of well known clairvoyant Ingo Swann. Swann repeatedly produced significant PK changes in continuous, automatic recordings of temperature variations of graphite samples. Extensive controls included insulating the thermistor in a thermos twenty-five feet away and counterbalancing hot-versus-cold instructions in a rigid pre-set manner. Additional analyses indicated that the PK effect operated by changing the temperature in a field around the target while producing opposite changes in some area distant from the target. It also transpired that the size of the effect was determined by psychological variables rather than by physical variables such as distance.7

Schmeidler and Maher tested for brain hemisphere effects on ESP performance. In this experiment, 24 right-handed participants guessed ESP targets while engaged in an analytical task that was thought to be dominated by the left brain hemisphere, and a holistic task (pattern recognition) thought to be associated with the right hemisphere. Targets were physical objects or words; participants made their choices using the right or left hand. ESP scoring was significantly high for right-handed choices of word targets during pattern recognition, as predicted, freeing up the language centres in the left hemisphere to use ESP in this word task. However, the high scores that were expected in the mirror image of this condition (left-handed choices of concrete objects while solving syllogisms) were not found. Overall ESP scoring in the two conditions was significantly high, although somewhat separated by gender: males scored significantly high, while females obtained non-significant but trending evidence of ESP.8

Schmeidler examined reports of out-of-body experiences to discover their characteristics and the situations in which they are likely to occur.9 She found that OBEs that happen spontaneously as a result of accident or illness (near-death experiences) exhibited a deeper phenomenology and longer-lasting spiritual impact than those that were self-induced. She concluded that some empirical support exists for OBEs as a real phenomenon, both from veridical reports in near-death accounts and the few laboratory studies extant at the time.

Schmeidler investigated the impact of values as measured by the Allport-Vernon Study of Values.10 In this study, unselected participants were first asked whether they believed they could demonstrate success at an ESP task, then given the Allport-Vernon Study of Values before completing the test. Schmeidler predicted that those who accepted the possibility of success would show higher scores than those who did not, also that that this would be especially marked among participants with high theoretical scores on the Study of Values (one of six categories measured). Both predictions were comfortably supported (p = 0.01).

Working with an Indian Swami, Schmeidler tested for the impact of meditation on ESP performance. Prior to meditating, the Swami was given a standard ESP test, in which he scored at chance. When the test was repeated after a period of meditation he achieved comfortably significant results (p = 0.01). This success was repeated several times.11 In a subsequent review, Schmeidler found a significant effect in four out of nine similar meditation studies.12

Schmeidler and veteran researcher Hoyt Edge canvassed views from other parapsychologists with regard to the future of the ganzfeld ESP experiment. This call was motivated by the negative findings of the Milton and Wiseman meta-analysis published in 1999. A common response was that meta-analyses should not be used to deliver proof of a finding, but rather to delineate the processes underlining the effect. A large proportion of the responses criticised the methodology and interpretations of the Milton and Wiseman meta-analysis.13

With Michaeleen Maher, Schmeidler investigated a case reported by a young woman and her mother who claimed to have witnessed on more than one occasion an apparition in the hallway of the mother’s residence.  Rather than conduct a typical field study, Schmeidler adopted a quantative approach. The apartment was divided into segments and mother and daughter were asked to indicate what kind of activity they observed in each. Schmeidler then invited a group made up of sceptics and psychic sensitives into the apartment and asked them to give their own impressions for each area. The sceptics would be expected to choose the areas that they imagined gullible individuals would ‘see’ apparitions, such as poorly lit areas. When a comparison was made, none of the sceptics’ indications were found to match those given by the mother and daughter, whereas those of two of the five sensitives matched significantly (p = 0.03, 0.04).

Schmeidler investigated the effect of therapy sessions on ESP scoring for a particular individual. Mood and psi ability were measured before and after each of 24 psychoanalytically-based therapy sessions. A (nearly significant) correlation was found between mood scores and ESP scores (p = 0.06). Interestingly, the variance of ESP scoring following therapy (a measure of how much the scores vary) was significantly reduced compared to scores achieved before therapy (p = 0.05) and very significantly reduced compared directly to chance (p = 0.002). Schmeidler interpreted the results as reflecting the subject’s ego-defenses.14

Investigating the influence of feedback on ESP performance, Schmeidler and colleagues arranged for 40 student participants to guess the order of ESP targets, where, in half the runs, simple feedback was given (correct or incorrect) and in the other half no feedback was given. There was no difference in ESP scoring rates between the two conditions. However, there was an effect of feedback of present targets on the hit rates of the preceding trials as well as preceeding trials – a result that is difficult to explain by simple ESP models.15

Schmeidler, G. (1943). Predicting good and bad scores in a clairvoyance experiment: A preliminary report. Journal of the American Society for Psychical Research 37, 103-110.

Schmeidler, G. (1943). Predicting good and bad scores in a clairvoyance experiment: A final report. Journal of the American Society for Psychical Research 37, 210-221.

Schmeidler, G. (1970). High ESP scores after a swami’s brief instruction in meditation and breathing. Journal of the American Society for Psychical Research 64, 100–103.

Schmeidler, G. (1983). Interpreting reports of out of body experiences. Journal of the Society for Psychical Research 52, 102-104.

Schmeidler, G., Murphy, G. (1946). The influence of belief and disbelief in ESP upon individual scoring levels. Journal of Experimental Psychology 36, 271-276.