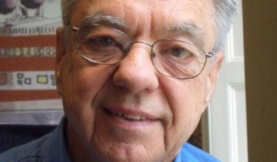 Hal Puthoff is an American physicist and engineer, with research interests in lasers, quantum engineering and space propulsion. He has also been active in parapsychology, a key figure in the early stages of the US government-funded remote viewing programme.

Harold (Hal) E Puthoff was born in Chicago on June 20 1936. He was awarded a degree in engineering in 1958 and a Master’s degree in engineering in 1960, both from the University of Florida in Gainesville. In 1959, he was recruited by the Sperry Electronic Tube Division, Gainesville, Florida, where he conducted research on electronic beam focusing systems for microwave tubes. In 1960, he was commissioned as an officer in the US Navy, where, assigned to NSA, he worked on improving computer speed using optical technology, for which he was awarded a Certification of Commendation by the director of NSA.

In 1963 Puthoff joined Stanford University working on lasers and non-linear optics, gaining a PhD in 1967. He then worked with, and invented, tuneable lasers and electron beam devices, for which he holds patents. He is co-author of Fundamentals of Quantum Electronics, which was published in 1969 and has been translated into Russian, French and Chinese.

In 1972 Puthoff joined Stanford Research Institute (SRI) in Menlo, California, in the electronics and bioengineering laboratory. There he worked on quantum physics and parapsychological phenomena, notably the government-funded remote viewing program known as Star Gate, which he co-founded and co-directed, investigating the purported ability to retrieve visual information from distantly located sites by ESP. Puthoff collaborated with Russell Targ extensively throughout the program, carrying out tests with psychic viewers such as Pat Price, Ingo Swann and Joe McMoneagle.

Puthoff has pursued research in alternative energy generation and space propulsion. In 1985 he founded the Institute for Advanced Studies at Austin (IASA), a facility dedicated to frontier research in science and engineering. In 1991 it was incorporated under EarthTech International, Inc, also founded by Puthoff.1  He regularly serves foundations, corporations, NASA, the US Department of Defense and intelligence communities as a consultant on leading-edge technologies and future technology trends. He is listed in American Men and Women of Science, Who’s Who in Science and Engineering, and Who’s Who in the World.

The Star Gate remote viewing program (first known as Grill Flame) began with a period of testing, recruitment and training, whose results were sufficiently impressive to convince the Pentagon to continue funding. From 1978, its primary focus was operational remote viewing for clients including the CIA, Defense Intelligence Agency, Air Force Intelligence Agency, Coast Guard and Drug Enforcement Agency.2  Highly adept psychics were hired as personnel, including US Army chief warrant officer Joe McMoneagle, photographer Hella Hammid, painter and psychic Ingo Swann, and psychic detective Pat Price. Puthoff and Targ published their findings in top-ranked academic journals including Nature, Proceedings of the Institute of Electrical and Electronics Engineers (IEEE) and Proceedings of the American Association for the Advancement of Science (AAAS).

The program was first tested in 1973, with remote viewers given coordinates by CIA officials. In one episode, descriptions of a secret radar listening station given by Ingo Swann and Pat Price were so accurate that they raised fears of a security leak, triggering a full CIA investigation. The following year the CIA agreed to fund the project if remote viewers proved able to identify a highly sensitive Russian site from the co-ordinates alone. Pat Price’s subsequent description of a giant gantry crane was corroborated by satellite surveillance photographs.  Price’s further description of an assembly of steel spheres inside a building at the site were shown three years later to be accurate, demonstrating for the first time that remote viewing could be potentially carried out precognitively. Other claimed successes included the provision of information regarding the location of kidnap victim Patricia Hearst and the identification of a gang leader from a group of forty mugshots.3

Puthoff was also involved in forced-choice ESP testing with close collaborator Russell Targ, in which participants attempted to guess which of four targets displayed was the randomly generated target.4  A hit resulted in the correct target being illuminated. Subjects were allowed to pass trials when they did not ‘feel psychic’, to encourage introspection and learn the feelings associated with psi hitting.

Preliminary testing with two subjects gave highly significant evidence of both ESP scoring and ESP learning (p = 2 x 10-6). In a wider screening study of 145 subjects, 11 scored significantly (p = 0.01) in both ESP scoring and learning. A second study, using the 11 high scorers from the first, failed to find any evidence of ESP or learning effects.

Borrowing from observational theory, Targ and Puthoff speculated that psi effects could be stimulated by the results being closely monitored and recorded. A third experiment employed this design, using eight of the high scorers from experiment one. Seven of the former high scorers scored at chance but one subject achieved very high significance (p = 4.19 x 10-4) by closely matching his mental state to hits and misses. The researchers concluded that some people are able to consistently learn ESP under the right circumstances.5