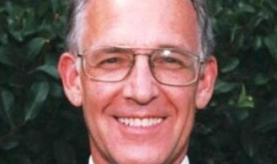 Hoyt Edge, professor of philosophy at Rollins College, Orlando, Florida, has carried out psi research, principally in the area of psychokinesis.

Edge tested psychokinesis in plants that were arranged near a lamp connected to a random number generator. He hypothesized that the plant would use PK to cause the lamp to come on more frequently than would be predicted by chance in order to receive warmth and light. In three out of five experiments there was significant evidence that this was the case and in one experiment, highly significant evidence (p = 0.0001). Control tests in which no plants were present were non-significant, suggesting that experimenter psi was not the cause (although this could still have operated at a deeper level order to create an apparent plant-PK effect).1 When Edge tried to replicate these findings there was no evidence of any plant PK effect, which he speculated might be due either to a decline effect or to differences in the quality of RNG devices used in the experiments (although robust checks confirmed the randomness of their output).2

Edge tested Anne Gehman, a well-known healer, for her ability to affect the activity of the enzyme trypsin. Activity was measured every 30 seconds for six minutes by placing samples in a UV spectrophotometer. The results only marginally supported a healing effect (p = 0.01) and proved less robust than her previous work with other parapsychologists. However, Edge found that placing the test samples near magnetic fields produced effects comparable to Gehman’s healing actions.3

Edge tested whether the euphoric high some runners experience at the end of a training session is associated with above chance scoring in an ESP test. Ten volunteers from a running group were asked each to focus on a target picture and draw and record their impressions after a run. Results were at chance.4

In a test of traditional uses of divining tools to enhance psychic ability, Edge arranged for ten volunteers to hold a pendulum over sealed envelopes containing one of two potential targets. The nature of the pendulum movement was used to determine the identity of the hidden target. Blind matching revealed no evidence of psi from 1125 trials. Because fatigue might have been a factor, Edge ran a second study with five volunteers who gave no indications of fatigue during the first study. This also failed to produce an evidence for ESP.6

Edge tested previous findings that suggested that daily circadian rhythms might influence psi ability. He arranged for an unselected female volunteer to record her body temperature at two-hour intervals each day and carry out 200 forced-choice ESP trials, for 1,000 trials a day.  There was no relationship between time of day or body temperature and psi scoring. Overall scoring was at chance therefore preventing strong conclusions from being drawn. More interesting results came from examining biorhythm theory – the idea that physical and mental rhythms exist over a 33 day period – arranging for volunteers to test their ESP on days that were predicted to maximize their scoring. Significant correlations were found for the group as a whole (p = 0.01) but when the data from one high scoring subject (p = 0.00001) was removed, the group correlations became non-significant.7

Edge and veteran researcher Gertrude Schmeidler questioned other parapsychologists regarding the future of the ganzfeld experiment. This call was motivated by the negative findings of the Milton and Wiseman meta-analysis published in 1999. A common response was that meta-analyses should not be used to deliver proof of a finding but rather to reveal the processes underlining the effect. The methodology and interpretations of the Milton and Wiseman meta-analysis were criticized.8

Edge conducted a series of distant influence studies in Bali. The psi task consisted of a person in one room, termed the ‘helper’, facilitating attention-focused meditation of a person in another room (‘helpee’). A computer randomly determined the designation sequence resulting in eight ‘help’ and eight control periods presented randomly. During help periods, the helper focused attention on a lighted candle with the intention of helping the helpee in the other room to focus on her candle. When the helpee felt her distraction wandering she rang a bell, which was recorded by an experimenter blind to the nature of the session period (control or experimental). Among 40 Balinese participants Edge found fairly strong evidence in favour of the distant influence hypothesis. (p = 0.01).9

Edge, H. (1978). A Philosophical Justification for the Conformance Behaviour Model. Journal of the American Society for Psychical Research 72, 215-231.

Edge, H. (1981). The Effect of the Laying on of Hands on an Enzyme: An Attempted Replication. Research in Parapsychology, Metuchen, NJ: Scarecrow, 137-139.

Edge, H. (1982). Some Suggestions for Methodology Derived from an Activity Metaphysics. Parapsychology and the Experimental Method. New York: Parapsychology Foundation, 43-64.

Edge, H. (1993). The Medium as Healer and Clown: An Interpretation of Mediumship in Bali. Journal of the American Society for Psychical Research 87, 171-83.

Edge, H. (2000). Extraordinary Claims in a Cross-Cultural Context, Proceedings of Aquem e Alem do Cerebro (Behind and Beyond the Brain). Porto, Portugal: Bial Foundation, 159-180.