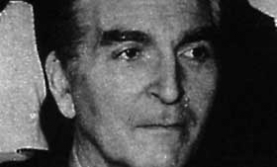 Hubert Larcher (1921-2008) was a French physician and parapsychologist, noted for his study of the various altered states of consciousness that can occur between life and death. Larcher was an early researcher on the property of endogenic substances of stimulating mystical hallucinations. He was a member of the Institut Métapsychique International since 1956, and its director from 1977 to 1995.

Hubert Larcher was born in Paris on June 26, 1921. He attended secondary school at the Ecole des Roches, then started medical studies at Montpellier and Grenoble, also following philosophy courses given by Jacques Chevalier.

In December 1944, Larcher was arrested by the Gestapo for acts of resistance and detained for three months before being sent to the extermination camp of Mauthausen, Austria. There he survived until the end of the war, practising Karma Yoga techniques to control sleep, hunger and cold.

In his teens Larcher developed an interest in spiritualist paranormal phenomena, and this influenced his career in medicine. He completed his medical studies in 1951 with a thesis on the physiological elements involved in the preservation of the human body after death, referencing reports concerning Christian saints.

He published two books and more than sixty scientific articles and chapters.

Aged twenty, Larcher coined the term hagiology to describe the investigation of the biology of saints. He became expert in mystical and ascetic phenomenology, and especially paranormal psychophysiology, developing a model of psychophysiological states (altered states of consciousness). This identifies a variety of different trance states spread between 10 levels of consciousness, starting from the waking state. The higher levels are (in ascending order): lucidity, extasis, psychostasis, and beatitude ; the lower levels (in descending oder) are: sleep, hypnosis, biocemese, biostasis, thanatosis. Each transition from one level to another is predicted as an observable form of trance, a potential total of 73. Larcher termed this study of trance states in humans anthropodynamics.1

Particularly interesting are his studies of the lower levels, based on observations of the auto-embalming process which in some circumstances gives rise to the appearance of preservation of life for an extended period. Biocemesis is a state of slowed life, as in hibernation. Biostasis is a state of apparent death (or suspended life), and is reversible – a total adaptation to functional death, notably that which occurs as a result of extreme environmental pressure. Thanatosis is a state of suspended death (or apparent life) and is irreversible.

Larcher’s interest in the varying states between life and death led to him becoming in 1966 a co-founder of the French Society of Thanatology. In due course he contributed there to the study of near-death experiences (NDE). According to his model, the NDE is a form of biostasis that can lead to metamorphosis, another key topic in his thought. The NDE frees the subjects from spatio-temporal constraints (lucidity), from limits of movement (extasis, as in the out-of-body experience), and from limits of individual knowledge (psychostasis). Finally, it provides an absolute knowledge (beatitude) which at the same time has the effect of prohibiting all functional life by reducing us to the immobility of enstase. Through this trance state, subjects become conscious of the totality of the knowledge, what the poet Milosz called ‘the sun of the memory’. Larcher shows how low levels of trance have a psychological correspondance in the higher levels.

Globally, Larcher tried to develop a scientific study of religious, mystical, and sacred phenomena, echoing the association between his deep Catholic faith and his scientific and philosophical training. Over two decades he participated in conferences of the World Alliance of Religions, discussing phenomena at the boundaries of religion and science.

Between 1958 and 1969, Larcher published several papers in the Revue Métapsychique on the ‘parapsychochemistry of divination’, a subject that first attracted the interest of IMI members in the 1920s. He analyzed neuro-psychopharmacological research on hallucinatory drugs to understand if and how they are conducive to parapsychological abilities.

Larcher discovered the literature on parapsychology after completing his medical studies. He developed an erudition in this field, and this enabled him to publish an introductory book2 (later translated into Portuguese). He also published new editions of two books on psi research by Charles Richet. As general secretary, then director of the IMI, he responded to requests from different quarters, giving free clinical counselling for people seeking help and information about exceptional experiences.

He rarely participated in parapsychological experiments. However, he visited (with Yvonne Duplessis) Robert and Jana Pavlita in Czechoslovakia in order to observe telekinetic experiments with Pavlita’s 'psychotronic generator’.3 He encouraged experiments with Pierre Janin’s tychoscope, a robot that moves randomly and facilitates micro-PK experiments in a playful atmosphere. He also carried out a questionnaire survey of people who appear predisposed to finding four-leaf clovers4, and published studies of the relationship between paranormal and art, notably with regard to the painter and medium Augustin Lesage.5 In general, he was more interested in qualitative studies.

He also contributed to the study of  Christian ‘miracles’ such as the alleged annual liquefaction of the blood of Saint-Januarius, although restrictions on access rule out a scientific study on its properties.

As a physician, Larcher was interested in the study of healing, claiming that medicine should devote the same amount of attention to normal and paranormal healing as to pathologies. But his efforts here were mainly epistemological and theoretical : he was knowledgable about various alternative models of medicine, including ‘philosophical anatomy’, the study of meaningful and symbolic correspondances between various parts of the body.

Larcher’s anthropodynamics integrate paranormal functions with an evolutionary biology inspired by Henri Bergson’s view of the universe as ‘a machine for the making of Gods’. He envisaged so-called supernatural and paranormal phenomena becoming encompassed in a new extended naturalistic perspective, and developed new epistemological tools for this purpose. One is ‘methodical belief’ – a counterpart to Descartes’s methodical doubt (that one should doubt everything, including one’s own doubts) – a scientific attitude that rejects nothing as false until it has been clearly shown to be so.