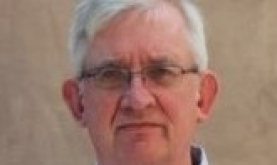 James Spottiswoode is an American physicist who has carried out psi research, notably in remote viewing, with an emphasis on seeking physical correlates to psi performance.

Starting in the early 1980s, James Spottiswoode was a consultant to the USG funded programs at SRI International, the site of a long term US government research program into paranormal phenomena (particularly ESP and psychokinesis), and later at SAIC where the program moved. He was subsequently director of research of the Cognitive Sciences Laboratory, which carried on the earlier SRI and SAIC work.

Spottiswoode’s psi research has focused on finding physical correlates to psi performance in the hope that such correlates, if found, will guide theory.  His psi research has encompassed remote viewing, presentiment effects and data modelling. In addition, he introduced a new variable to psi research, that of local sidereal time.  More recently, he has collaborated in investigating the impact of questionable research practices on reported experimental results.

In a high profile publication, Spottiswoode and Bierman describe attempts to estimate the effect of questionable research practices (QRPs) in a well-known research area of parapsychology – the ganzfeld telepathy experiments.1 They ran simulations across the entire ganzfeld data set, applying QRPs found in the mainstream literature. The overall hit rate fell from 31% to 27% where 25% is expected by chance, which despite the large reduction in effect size is still a significant result (p = 0.003).

Spottiswoode has contributed to the development of Edwin May’s Decision Augmentation Theory (DAT), which offers a novel explanation for the success of psychokinesis (PK) experiments and other psi research. DAT views information of the future being ‘filed away’ and utilized in the present to maximise psi scoring on psychokinesis tasks and other tests. For example, a participant in a psychokinesis experiment might start a session at the precise moment the future random sequence most favourably matches with the designated PK aim for that session, that is, to aim for more 1’s rather than 0’s.

In a 1995 paper, Spottiswoode and May summarize the model and demonstrate that applicable research findings agree with it within the boundaries of chance. They contrast DAT modelling with contrary force-like assumptions for the PK database and conclude DAT is a closer fit to the data.

More specifically, the model’s predictions for the random number generator (RNG) database are significantly different for force-like versus DAT modelling, especially in relation to random number generator experiments with a large number of trials. In a typical PK experiment the participant presses a button and a fixed number of bits are collected. If force-like mechanisms were operating on the level of a single bit it would be expected that the Z score per button press would increase with the number of bits collected, but tellingly, this is not observed.  On the contrary, no relationship is seen between the statistical outcome collected per button press and the number of bits collected following that button press. Spottiswoode and May argue this strongly supports DAT.

Further support for DAT is provided by a large PK data set from the PEAR lab. This disagrees with the force-like model by 8.6 standard deviations (billions to one against chance), but agrees with the DAT model to within 1 standard deviation – well within chance. Spottiswoode and May also provide six empirical-based arguments against force-like hypotheses and in support of his DAT model.2

The Global Consciousness Project (GCP) is a large-scale project that apparently shows anomalous correlations between world events and the output of random number generators located around the world. By 2009, it had been running for just over a decade and exhibited a Stouffer Z of 5.81, a huge statistical effect (p = 10-8).  Referring to their DAT modelling and analyses, Spottiswoode and May point out that the evidence provided by laboratory-based random number generator studies overwhelmingly demonstrates that no forces are involved in creating the significant effects, but rather data selection effects using precognition.

Similarly, Spottiswoode and May argue that the GCP formal events display a similar profile to RNG analyses, favouring DAT over force-like explanations. They point out that Roger Nelson, who initiated the project and has overseen it since its inception, brought 234 events to the attention of the GCP for a Stouffer Z for his contribution of 5.91, whereas the 66 other events yielded a Stouffer Z of 1.26, and the Z score of the difference was a highly significant 3.29 (p = 4.97 × 10-4). They argue that this suggests that Nelson's psi-mediated decision-making is the catalyst behind these effects rather than a ‘global consciousness’.3 These conclusions have more recently been confirmed by the work of Peter Bancel.4

Presentiment research is a well-established way to test for precognition using physiological measures. Previous studies have suggested that skin conductance levels respond to an emotional stimulus 2-3 seconds before its random presentation. Spottiswoode and May carried out an experiment in which 20 participants heard 20 stimuli per session, with a 50% chance of being exposed to a loud alarm as opposed to a silent control.  Participants’ skin conductance showed marked changes a few seconds beforehand, evidence of a significant presentiment effect (p = 0.0005).  Neither anticipatory strategies nor potential artifacts could explain the reported effects.5

Physical variables are also important in understanding psi functioning. A possible influence is that of sidereal time – the relative position of the Earth to the stars and geomagnetic field strength (GMF). Spottiswoode examined a database of 2,879 free-response anomalous cognition trials. The overall correlation with GMF was small (-0.026) but marginally significant (p = 0.06).  An increased GMF-psi correlation was found for 256 trials conducted around 13 hours Local Sidereal Time (p = 0.002).6  This time period was associated with a four-fold increase in effect size relative to other time periods, illustrating the importance of understanding the interplay of physical factors, especially in studies that only report single variable correlations.

When Spottiswoode and Ryan examined fresh free response data in 3678 trials. they failed to find the previous sidereal time 13.5 hour peak.  Instead there was a small peak around 7.5 hours sidereal time. They interpret this lack of replication by suggesting the sidereal-ESP correlation is modulated by long-term cycles such as solar activity.7

Bierman, D., Spottiswoode, J., Bijl, A. (2016). Testing for Questionable Research Practices in a Meta-Analysis: An Example from Experimental Parapsychology. PLOS ONE. 11/5.