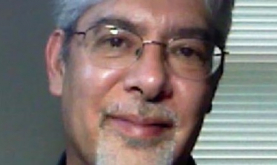 John Kruth is executive director of the Rhine Research Center in Durham, North Carolina. His research interests include psychokinesis, bioenergy in healing, physical correlations with psi experiences, and the application of potentially useful psi technologies.

John Kruth is executive director of the Rhine Research Center and founder and education director of the Rhine Education Center. Kruth has been a member of the Rhine research team since 2009. He has had a lifetime interest in the paranormal and earned a Master of Science degree in psychology. Aided by his extensive software and technology background, Kruth’s research focuses on the nature of subtle energies of the body, including biophoton emissions, and the role of psi during computer system malfunctions.

Kruth has continued the work of Bill Joines and Steve Baumann, who founded the Bioenergy Laboratory at the Rhine Research Center in the early 2000s.1 The laboratory’s purpose is to detect electromagnetic radiation from humans during times of focused intent, for example, during deep meditation or energy healing. Sensitive infrared (IR) and ultraviolet (UV) light detection equipment measures invisible light emissions from gifted individuals who volunteer to participate.

Over the lifetime of the laboratory over a hundred individuals – including self-proclaimed energy healers, meditators, martial artists, and others who claim no special ability – were measured for their ability to emit biophotons (low level ultraviolet light emissions from biological organisms including humans). These experiments occur in complete darkness in an electromagnetically shielded room.

Kruth and his colleagues found that four individuals and three meditation groups could achieve biophoton counts up to a million a second, where control readings typically give less than ten counts a second. These huge deviations began when the individuals focused on their respective disciplines and subsided when the activity ceased.

The research has continued to flourish, with several other high-profile healers, including well-known energy practitioner Edd Edwards, achieving extraordinarily high biophoton counts. These persist despite the careful measures taken to eliminate potential confounds.  Lately, Kruth has found high biophoton counts even when the sensor is capped, suggesting that some effects might be due to psychokinesis on the general operation of the detector rather than the production of biophotons.

Working with colleagues in Italy, Kruth investigated the possibility of long-distance biophoton detection. Two studies were completed with the aim of investigating whether focused intention by five selected volunteers located at a distance of over 7000 km might increase the number of photons detected every half second by a photomultiplier in the Rhine Research Centre Bioenergy Lab. In each experiment the intention condition session took place between two control sessions in which no influence was attempted. Analysis showed little effect during the intention condition; however, a clear-cut difference in counts between the first and second control sessions suggested a cumulative effect, commencing during the first control session and developing throughout the experiment through to the second control session. In the second experiment, this cumulative effect of mental intention was not found. An overall analysis found an increase of approximately 5% for instances of extreme photon counts (above 100,000), from the first to the second control session, a very surprising finding (p = 2.1 x 10-4).  Kruth and co-authors discuss potential mechanisms for such distance effects, including geophysical influences, experimenter psi and entanglement between detector and subject.2

Kruth reports a case of electronic poltergeist disturbances (EPD) associated with an eleven-year old boy, such as strange voicemail recordings, breakdown of electrical devices and phone interference at the boy’s home and misfunctioning computers at his school. Family members documented 31 such occurrences. Kruth himself was able to record very strong evidence for EPD on a computer that refused to boot up for the boy but booted up every time for Kruth, in an alternated fashion. Kruth introduced the boy to mindfulness therapy in order to reduce the stress thought to be the trigger for the EPD events, and these disappeared over a period of several months.3

In a 2015 paper, Kruth describes qualitative research approaches (based on non-numerical observational data): case studies, phenomenology, grounded theory, and ethnographies; also those used in transpersonal research. The paper includes multiple examples from the field of parapsychology, discussing how each could help advance understanding of psi phenomena and provide the basis for quantitative lab based research. Kruth suggests that a  deeper appreciation of the value of qualitative research techniques will help psi researchers improve their laboratory work.4

Kruth describes an associative remote viewing (ARV) project designed to predict investment returns and make money in the process. Three remote viewers made predictions concerning an image they would be shown in the future, each image representing the direction of a particular market investment. An independent judge determined how to invest based on which picture was rated first with the remote viewer mentations. Overall, the project made a loss of 7.5%; without technical issues this would have been a 2.5% profit.  A significant (p = 0.05) variation in rating quality emerged, showing the importance of using an experienced judge.5

Kruth carried out an experiment to discover whether anxiety on the part of operators in a computer network may cause communication errors. Participants were asked to complete simple but tedious tasks, experiencing frustration from software glitches that had been deliberately created in order to impede their progress (a control group performed the same task unencumbered). Meanwhile, an independent network was rapidly sending messages (simple lines of text) to the computers; some were garbled or incomplete as a result of communication errors that normally occur, for instance as a result of network collisions, wiring issues or signal interruptions, but the the software, instead of correcting them, was counting them so that researchers might determine how many occurred during the process.

The prediction that anxiety-prone participants would produce more network errors than less anxious operators was confirmed (p = 0.04), appearing to show that anxiety may affect network communication, and possibly cause other unintended electronic effects.6

Kruth, J.G. (2018a). Associative remote viewing for profit: Evaluating the importance of the judge and investment instrument. Proceedings of the Conference for the Society for Scientific Exploration and the International Remote Viewing Association – 2018. Las Vegas, NV.

Kruth, J.G. (2018b). An exploration of the effects of mood and emotion on a real-world working computer system and network environment. Proceedings of the Parapsychological Association Conference 2018. Petaluma, CA.