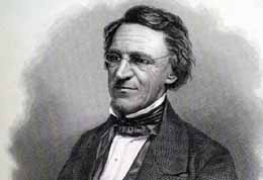 American lawyer, judge, and politician (1799-1874), remembered as one of the first serious investigators of séance mediums.

John Worth Edmonds was born on March 13, 1799 in Hudson, New York, He was admitted to the New York Bar in 1819 before entering politics.  He served in both the New York State House of Representative and New York State Senate from 1831 to 1836, for a time as president of the Senate.  In 1843, he was appointed Inspector of State Prisons and instituted a number of reforms, gaining a reputation as a tough, scholarly, humanitarian. In 1845, he was appointed as a New York Circuit Court judge and in 1847 he was elevated to the Supreme Court of the State of New York, eventually serving as its Chief Justice.  He resigned in 1853 and returned to the practice of law.

In 1851, soon after the death of his wife, Edmonds was persuaded to attend a séance with friends.  ‘I was at the time a disbeliever,’ he later wrote. ‘I had all my wits about me, and was on the sharp look out for deception.’ [1]  In his first sitting, Edmonds observed messages coming by means of the rapping method:

Three things struck me as remarkable.  One was that under the circumstances it was beyond all cavil that the sounds were not produced by the instrumentality of any person present. Another was, that my mental questions were answered, when I knew that no person present could know what they were, or even that I was asking any; and a third was, that I was directed to correct a mistake I had made in my written memorandum of what was occurring, when I knew that no one present was aware that I had made a mistake, or what it was.

The mistake was having written ‘No one.  Not wo’, which a rapped communication pointed out should have been written as ‘Number one.  Number two.’ [2]

Over the next two years Edmonds witnessed several hundred mediumistic manifestations of various kinds and made detailed records. He later wrote:

I went from place to place, seeing different mediums, meeting with different parties of persons; often with persons whom I had never seen before, and sometimes where I was myself entirely unknown, sometimes in the dark and sometimes in the light; often with inveterate unbelievers, and more frequently with zealous believers. In fine, I availed myself of every opportunity that was afforded, thoroughly to sift the matter to the bottom.  I was all this time an unbeliever, and tried the patience of believers sorely by my skepticism, my captiousness, and my obdurate refusal to yield to belief.  I saw around me some who yielded a ready faith on one or two sittings only; others again under the same circumstances, avowing a determined unbelief; and some who refused to witness it at all, and yet were confirmed believers.  I could not imitate either of these parties, and refused to yield unless upon most irrefragable testimony.  At length the evidence came, and in such force that no sane man could withhold his faith. [3]

Edmonds further stated that questions in his mind, but not expressed out loud, were often answered by the medium. Sometimes his 'most secret thoughts, those which I have never uttered to mortal man or woman' were repeated to him. [4]  He also reported the phenomenon of xenoglossy:

I have known Latin, French, and Spanish words spelled out through the rappings, and I have heard mediums who knew no language but their own speak in those languages, and in Italian, German, and Greek, and in other languages unknown to me, but which were represented to be Arabic, Chinese, and Indian, and all done with the ease and rapidity of a native. [5]

One of the mediums observed by Edmonds was his own daughter Laura, whose besides English knew only a little French, yet while entranced during sittings was heard by him to speak Spanish, French, Greek, Italian, Portuguese, Latin, Hungarian and Indian languages fluently. She sang in foreign languages, and also in English, 'improvising both words and tune as she proceeds – the melody being very unique and perfect, and the sentiments in the highest degree elevating and ennobling.' [6]

During his investigations Edmonds began to develop clairvoyant and precognitive abilities of his own, describing vivid visions that were impressed on his mind.  However he often found it difficult to interpret the messages or to convey the idea.

I am often conscious that I fail, from poverty of language, in conveying the sentiment I receive with same vigor and clearness with which it comes to me …  Sometimes the influence is so strong, that I am given, not merely the ideas, but the very words in which they are clothed, and I am unconscious of what I am going to say until I actually say it.  At other times the thought is given me sentence by sentence, and I know not what idea or sentence is to follow, but the language used is my own and is selected by myself from my own memory’s storehouse.  And at other times the whole current of thought or process of reasoning is given me in advance, and I choose for myself the language and the illustrations used to convey it, and sometimes the order or giving it.  But in all these modes there is more or less myself in them, more or less of my individuality underlying it all. [7]

In 1852 Edmonds met Dexter, a New York physician who like himself had started out as a sceptic, before first becoming convinced of the genuineness of spirit mediumship, then developing mediumistic ability himself.  Edmonds, Dexter and others formed a circle that met on a regular basis and received philosophical teachings on the mysteries of life and death, purportedly from the spirits of Emanuel Swedenborg and Francis Bacon. These were communicated initially through Dexter’s writing and later by Dexter’s trance voice.  Edmonds observed that Dexter’s handwriting changed with each communicator and was unlike his own handwriting. Moreover, the communications were taken down with a rapidity greater than Dexter could manage when not entranced, while the ideas they expressed were often in conflict with Dexter’s own, or beyond his prior knowledge. [8]

Edmonds and Dexter subsequently collaborated to produce the two-volume work Spiritualism, describing their experiences over more than a thousand pages.

Some equally distinguished contemporaries were inspired by Edmonds to take an interest in mediumship, and ended by making similar claims.  One was Nathaniel P Tallmadge, a US senator whose thirteen-year-old daughter began displaying mediumistic abilities, for instance playing the piano in an entranced state like an experienced pianist.  Tallmadge wrote to Edmonds:

She knows nothing of notes or music, and never played the piano before in her life. The first time she played was Beethoven’s Grand Waltz, and then several others with which we were familiar.  After that, she played many we had never heard before, and improvised words suited to the airs, beautiful, and of the highest tone of religious and moral sentiment. [9]

Robert Hare, a professor of chemistry at the University of Pennsylvania and a renowned inventor, was initially angered by Edmonds’s claims and set out to debunk the ‘popular madness’ by carrying out his own investigation. After fourteen months, and experiences with more than twenty mediums, he attested to the reality of the phenomena in his book Experimental Investigation of the Spirit Manifestations (1855).

The publication of Edmonds’s and Dexter’s book in 1853 led to attacks on Edmonds by the press, clergy and politicians, forcing him to resign from New York’s Supreme Court and return to practising law.  He also had defenders. The New York Evening Mirror described him as ‘an able lawyer, an industrious judge, and a good citizen’, and continued: 'Whatever may be his faults, no one can justly accuse him of a lack of ability, industry, honesty, or fearlessness. No one can doubt his general saneness, or can believe for a moment that the ordinary operations of his mind are not as rapid, accurate, and reliable as ever.' [10]

Edmonds declared himself to be a spiritualist, believing in communication with spirits and the survival of consciousness at death, while asserting that he started out as a non-believer and only became convinced by repeated demonstrations. However, as has been the case with many serious investigators, the tag of ‘spiritualist’ has tarnished his reputation, implying that he was too biased to be seen as a credible witness.