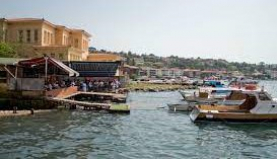 Kemal Atasoy was a Turkish Alevi boy who recalled being an Armenian man residing in Istanbul. The case is unusual for the long distance between the places of death and rebirth as well as the fifty-year interval between lives. At six, Kemal still retained his memories clearly and he was the main informant for his case. His statements were written down by researcher Jürgen Keil before they were verified.

Kemal Atasoy was born in 1991 in Hatay, Turkey. His family were Alevi, a Shia Muslim sect that form a minority of the population of Turkey. Not all Alevi believe in reincarnation, but those residing in the south-central part of the country do.

Kemal’s father was an accountant and his parents belonged to the upper middle class of Hatay, with friends across the Turkish cultural and religious spectrum. When Kemal began to speak about a previous life at two and a half years of age, they listened with tolerant interest. Although they were aware of Alevi reincarnation beliefs and past-life memories, they attached little significance to Kemal’s statements and made no attempt to verify them. Nor did they talk about Kemal’s memories much outside of their family.

Parapsychologist Jürgen Keil learned about Kemal’s case from his interpreter, who knew the Atasoys. The interpreter happened to mention his work with Keil researching children with past-life memories and Kemal’s father told him that Kemal was such a child.

Keil and his interpreter met Kemal at his home. His mother was present for the entire interview; his father joined them partway through. The interpreter translated Keil’s questions at short intervals. Keil took notes but did not make audio recordings because he had found that cassette recorders often created needless distractions.

Kemal was six at this time, but still had clear memories of the previous life. Thus, unlike many reincarnation cases, where children have forgotten much or all by the time investigators reach them, Kemal himself was the main informant for his case. Keil was impressed with the clarity of his memories and the confidence with which he expressed them.

Kemal said that he had been an Armenian Christian man named Karakas living in a large three-story house in Istanbul. His house was beside the house of Aysegul (Ayşegül), whom he knew. However, he only lived there part of the year. He had been shot and killed; his wife was somehow involved in his murder.

A full list of Kemal’s statements and an appraisal of their accuracy is given below. Kemal’s parents could think of nothing that might connect them to the life he described. They had no friends or relatives in Istanbul and had no Armenian acquaintances. Keil reported on the case in a journal paper co-authored with Jim B Tucker, who summarized it in his book Life Before Life.1 The present account follows these sources.

Keil recorded the following statements on his first meeting with Kemal, before he went to Istanbul to undertake their verification. Two or three years previously, Kemal’s father twice had gone to Istanbul on business, but on neither occasion did he seek to determine the accuracy of his son’s memories.

Verification of Kemal’s statements was greatly facilitated by his memory of being Ayesgul’s neighbour, as this woman was moderately well known in Turkey. She was an art dealer who had gotten in trouble with the law and had fled the country when a court case was opened against her.

Keil located Aysegul’s house in the Cengelkoy (Çengelköy) section of Istanbul. Next to it was an empty three-story house that matched Kemal’s description. It faced the Bosphorus Straight, where boats were moored. Behind the house was a Greek Orthodox Church.

Learning the identity of the house’s former occupants proved to be more difficult. Initially, Keil could not find anyone who had heard about an Armenian who lived there. There were no Armenians in the area at the time of his enquiries. Eventually he encountered an elderly man who had lived in Cengelkoy for many years, who told him that an Armenian had definitely lived in that house at one time.

Keil then interviewed a local historian, born in 1924, who provided additional information. Keil asked the historian what he knew about the house’s occupants, without letting on what Kemal had said. The historian told him that an Armenian Christian man with the family name of Karakas had lived there. The Karakas clan dealt in leather goods and Karakas often carried a substantial leather bag. His wife came from a Greek Orthodox family who did not approve of the marriage. The couple had three children. Karakas died in 1940 or 1941. There was talk that Karakas’s wife had something to do with his death.

On a later visit to Istanbul, Keil met some elderly men who recalled that the house had been in the possession of Karakas’s wife’s family but that Karakas’s wife and children did stay there after his death.

Keil tried to secure confirmatory documents, but in this he was unsuccessful. According to officials from the Greek Orthodox Church, about forty years before, more than three hundred Greek Orthodox families lived in the Cengelkoy area. These families had since returned to Greece and their current whereabouts were unknown; no contact information was available for any of them.

Keil searched for records of Karakas’s marriage and funeral. Unfortunately, records of the Armenian Church had been lost in a fire in 1957. Keil searched one of the newspapers published at the time of Karakas’s death without finding any reference to him. News in the early 1940s mainly concerned war events.

Keil fully verified the majority of Kemal’s statements about his life as Karakas through his own observations or talking to witnesses, but some he was able to confirm only partially or not at all.

After Keil had obtained all the details about Karakas he could, he visited Kemal again. He showed him a photograph of Karakas’s house, taken from across the Bosphorus. Kemal was struck by the picture and believed that he could identify his room in the house. He was then eight years old, however, and had begun to forget details he had recalled earlier. He did not respond to any of the new facts about Karakas that Keil had uncovered.

Birthmarks or birth defects corresponding to wounds on the previous body have been observed in 35% of cases of children who claim to remember previous lives. These birthmarks are in the same locations as the wounds and typically have a similar appearance.2

Kemal had a birthmark on his chest that was visible for several years, and which he said corresponded to the wound caused by the bullet from the pistol with which he was shot. Kemal parents did not notice the mark until Kemal started to talk about it when he was about three years old. The birthmark was no longer visible when Keil met Kemal.

Keil noted that the early age at which Kemal began to speak of the previous life was the norm for the reincarnation cases studied by Ian Stevenson, the preeminent reincarnation researcher, whose investigative methodology Keil was following. Moreover, Stevenson had found that it was common for past-life memories to fade by late childhood.3

Keil also pointed out several unusual features of Kemal’s case. The median distance between the places of death and rebirth in Stevenson’s large case collection was fourteen kilometres (8.7 miles)4 and only a few cases involved distances greater than five hundred kilometres (310 miles). The distance from Istanbul to Hatay was about 850 kilometres (528 miles).5

The record of Kemal’s statements Keil made prior to their verification is another important feature of the case. Only 33 of the 2,500 cases in Stevenson’s files at the Division of Personality Studies8 had prior written records as of 2005.

The long distance and time between lives, together with the difficulties Keil had in obtaining information to assess Kemal’s memories, made it seem unlikely that Kemal – or his parents – could have learned the story of Karakas through overhearing someone talk about it or another normal means of information gathering.

Sceptics frequently surmise that parents shape their children’s apparent past-life memories and behaviour in accord with their beliefs and expectations about reincarnation, but this theory fails to explain verified past-life memories in cases with prior written records, Keil maintained. Additionally, cases with prior written records lend credence to children’s verified past-life memory claims in general, since they demonstrate that some children do make numerous statements about deceased individuals that are shown to be accurate, ‘and they cast significant doubt on the ability of the socio-psychological hypothesis to accurately explain this phenomenon’.9

Vitor Visoni critiqued several elements of Keil’s investigation and presentation of Kemal’s case; Keil and Tucker responded to this critique.10

Keil and Tucker responded that this had occurred only with this one interpreter, who was accused of cheating not in his assistance to Stevenson, but in separate research. There were no allegations of interpreter fraud in any of Stevenson’s cases.

Keil and Tucker pointed out that Kemal’s mother could not have fed him information, because she knew nothing about the events described. Although tape recording interviews might seem ideal, the process of getting recordings could be impractical, or worse, might impact on the quality of the information being obtained.11 Stevenson returned to witnesses repeatedly to check on the reliability of their testimony, but that was not needed in this case, because no one had attempted to verify Kemal’s memories. Moreover, from the single interview, Keil obtained sufficient information to do so.

Keil and Tucker observed that they did not see how an investigator with no knowledge of Kemal’s testimony would have known what questions to ask or what to look for in evaluating their truth or falsity.12

Keil and Tucker responded that Visoni was not making allowance for Kemal’s age – eight – at the time Keil returned to him to report on his discoveries, by which time Kemal’s memories had faded substantially. Children of this age rarely perform well on recognition tests.

Keil and Tucker replied that they were ‘unaware of any psychological disorder that could lead a child to know numerous details about a man who lived 850 kilometres away and died fifty years before’.

Visoni concluded his critique by acknowledging that, despite the issues he had raised, Kemal’s case was ‘still’ a strong one evidentially, in which assessment Keil and Tucker concurred.

Keil, H.H.J., & Tucker, J.B. (2010). Response to “How to improve the study and documentation of cases of the reincarnation type? A reappraisal of the case of Kemal Atasoy”. Journal of Scientific Exploration 24, 295-98.

Visoni, V.M. (2010). How to improve the study and documentation of cases of the reincarnation type? A reappraisal of the case of Kemal Atasoy. Journal of Scientific Exploration 24, 101-8.