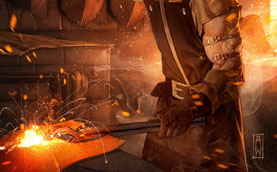 This is the Indian case of the young daughter of educated Hindu parents who remembered a previous life as the wife of a Muslim blacksmith. It is one of a small group of cases in which a child's statements were written down before they were verified.

Sundari was born around 1900 into a moderately well-off family in the village of Bajitpur, near Darbhanga in northeast India (no family name is recorded). She married a blacksmith and had two sons, Misri Lal and Shiv Nandan. They lived in Urdu Bazar, a quarter of Darbhanga inhabited by Muslims. When her husband died in 1926, Sundari raised the two boys alone, earning income from selling ornaments and employing a man to work the smithy. In 1930 she remarried, to a man who already had two sons and a daughter. Misri Lal married a woman named Saro Devi, who lived part of the time at his mother’s new house. Sundari was much attached to her older son Misri Lal, and preferred his wife to the wife of her other son.

Misri Lal discovered that his stepfather had been misappropriating his father’s money, and took him to court. Sundari became alienated from her second husband, and reluctantly gave evidence against him. A few days before the case was to be heard in court, Sundari became ill and died. Misri Lal suspected poisoning (her husband clearly benefited from having her out of the way) but was dissuaded from ordering an autopsy.

Sundari was said to be an attractive personality, cheerful and fond of children. She possessed a pet cobra that slept in her room with her. She was devout, spending much time in religious exercises and observing regular fasts. She often went to see religious dramas in the local cinema. She was generous with her money. She helped Misri Lal rebuild her old house so that he could live there. She died around 1950.

Kumkum Verma was born in 1955, the third child of BK Verma and his wife Subhadra. They lived in Bahera, a village of northern Bihar, near the city of Darbhanga.

Aged three and a half, Kumkum began speaking of a previous life in a family of blacksmiths in Urdu Bazar. Gradually other details emerged. She had a son named Misri Lal, also a grandson, Gouri Shankar. She said she had died ‘because of an altercation’, poisoned by a daughter-in-law. She asked to be called ‘Sunnary’, which in Maithili, the local dialect of Bihari, means ‘beautiful’; later it was realized that she was trying to say 'Sundari'.

Kumkum’s parents did not encourage her to talk of a previous life and ignored her requests to be taken to Urdu Bazar. They were alarmed at the strength of her feelings, and feared the excitement of tracing the former family would make her ill. However, they did not try to suppress her talk. An aunt took an interest and made written notes of many of these details when Kumkum was about three and a half years old; this was before an attempt at verification took place a few months later, when she was four.

Kumkum’s father mentioned her statements to a friend, Harish Chandra Mishra, a senior official in the estate of the Maharaja of Darbhanga. Harish Chandra Mishra sent an employee to try to find a blacksmith named Gouri Shankar. The family was successfully traced, and Gouri Shankar’s father, Misri Lal, confirmed that Kumkum’s statements and behaviour accurately conformed to facts in the life of his mother Sundari.

Kumkum’s parents would not allow Misri Lal to meet the child, nor let her visit his family in Urdu Bazar. However, her father went to Urdu Bazar once to meet members of the previous family and photographed people and objects he thought she might recognize.

In 1961 a journalist visited both families and wrote a detailed report of interviews that he carried out with them. Two years later, P Pal (an Indian investigator and a field assistant of Ian Stevenson) conducted his own interviews and was furnished abstracts from Kumkum's aunt's notebook, although the notebook itself was later lost when the aunt loaned it to a friend who did not return it.

Stevenson himself became involved in the case in 1964, when he re-interviewed Kumkum's parents and the aunt who had written down Kumkum's recollections. More interviews were carried out by Stevenson's team in 1965 and 1966. Stevenson returned in 1969 and carried out additional interviews with all the main informants. (Kumkum by this time had lost nearly all the memories of the previous life.) Stevenson wrote about the case in the first volume of his Cases of the Reincarnation Type series, published in 1975.1

Darbhanga is a large city near India’s northern border with Nepal. Sundari’s family lived in the Urdu Bazar quarter of the city. Being members of a low class of small businesses and artisans their paths would not have crossed those of the educated Vermas, who lived in Bahera, a large village in the same district, about forty kilometres (25 miles) from Darbhanga.

The Vermas farmed land, and Kumkum’s father also practised as a homeopathic physician and wrote books. Sundari’s family by conrtrast had little or no formal education. Dr Verma said he had never been into Urdu Bazar. The friend in Darbhanga who helped trace the other family did not know much about Urdu Bazar, and had not heard of Misri Lal Mistry. Dr Verma said he did not discover any friend he and the other family had in common. Misri Lal said he never went to Bahera until doing business there in 1968 and did not visit the Vermas. His son Gouri Shankar said he first went there in 1959 to visit Kumkum, after hearing that she was talking about the life of his grandmother.

Kumkum's mother had some unusual experiences while she was pregnant with Kumkum.

During her pregnancy, Kumkum's mother also dreamed of a girl surrounded by snakes. She had had no dreams involving snakes with her other children. Given that Sundari had a pet snake, this dream qualifies as an announcing dream, a dream which heralds a reincarnation.

At her birth, Kumkum was noticed to have marks on the lobes of her ears in the places earrings would have been attached. These marks corresponded to Sundari's pierced ears.

Kumkum's complexion was unusually fair for her family. As a child, she was slim and taller than other girls her age. Srimati also had been tall, slim and fair in complexion.

Of fifteen statements included in the excerpt from Kumkum's aunt's notebook Pal was provided, all proved to be true or partially true of Sundari. These fifteen statements are only part of Kumkum's memories recorded by investigators, however. Stevenson lists 56 different statements attributed to Kumkum, who was never taken to Dhambhala and had no contact with any member of Sundari's family, except for the brief encounter with Sundari's grandson Gouri Shankar when he visited Bahera.

Kumkum's statements that were verified as true for the life of Sundari included the following:

Kumkum showed great emotion in narrating her previous life, and often appeared distressed. She showed a strong impulse to go to Urdu Bazar in Darbhanga, and once, when her family were visiting the city, left the group walking determinedly along the road there. It was some time before her absence was noted and she had to be forcibly brought back.

Kumkum told her siblings that if they would accompany her to her previous home she would give them money. She showed anxieties about the welfare of Gouri Shankar. On a holiday when gifts are customarily exchanged she asked for money to purchase gifts of clothing for her grandson and daughters-in-law.

Several of Kumkum’s statements were triggered by incidents, such as cooking or objects. For instance her reference to her having a pond dug out, and paying the labourers, came when her father helped in an archaeological dig. The memories were often voiced as comparisons with the previous life, as when she complained she had less money than previously.

Kumkum showed an unusual interest in snakes. She was also fearless of them: once when she was six, a cobra fell from a tree, causing panic among other children, but Kumkum went up to the snake, patted it gently and it crawled away.

Kumkum’s parents found her notably more religious than their other children, seeming to know the proper procedures for religious ceremonies at a very early age.

Kumkum was more mature for her age than other children, willingly doing housework, feeding small children, and looking after sick persons. She would also tend to a child of lower caste that other family members would not touch. She preferred the company of adults, and sometimes adopted adult mannerisms, apparently speaking with the authority that she felt she retained from the previous life.

Kumkum’s family noted that the child spoke Mathili with a different accent from that of her family, which appeared related to the lower-class speech used by Muslims in Darbhanga. Occasionally her phrasing of certain expressions also showed this influence.

Stevenson made several follow-up visits to Kumkum and her family. The memories and behaviour were prominent until about the age of seven, after which the memories diminished. By the age of fourteen the memories appeared all to have vanished. Many of the behavioural traits persisted at least into her teens, notably the strong interest in religion.

Stevenson argued that the considerable social gulf between Kumkum’s educated parents and humble Muslim blacksmiths made any previous contact between the two families before Kumkum began speaking of a previous life very unlikely. The doings of the inhabitants of Urdu Bazar, and even its existence, were of little interest to people such as the Vermas. Sundari led a relatively obscure life and it is unlikely that events of her life could have become known normally to a small girl in a village forty kilometres away. The events Kumkum described would have happened at least eight years before. The difference in social class also makes it unlikely that the Vermas would embellish or invent such a connection.

Even after the first verifications of Kumkum’s statements, there was much less contact between the two families than is usual in cases of this kind, and therefore less likelihood of cross-contamination of witness testimony.

Stevenson identified three features that he considered strengthen the authenticity of the case: the written notes made of many of the child’s statements six months before any verifications were made; the fact that Harish Chandra Mishra, the person who traced Sundari’s family, was not closely connected to the Vermas, and had no connection whatever with Sundari’s family (of whose existence he was ignorant at the start of his enquiries; and third, that his own investigation essentially corroborated the facts revealed in two earlier investigations.

Stevenson, I. (1975). Cases of the Reincarnation Type. Vol. I: Ten Cases in India. Charlottesville, Virginia, USA: University Press of Virginia.