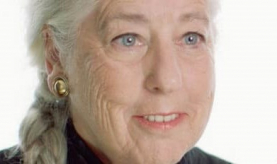 Leanna Standish is an American neuroscientist and naturopathic physician who has performed psi experiments in distant interactions.

Leanna Standish is a professor of naturopathic medicine at Bastyr University in Seattle, and clinical professor for the School of Public Health at the University of Washington. Her current research is on the therapeutic potential of medicinal mushrooms in treating cancers.1 Her parapsychological research has focused on using brain imaging to investigate qigong and other energy healing modalities, also information transfer between distantly separated individuals.

Experiments with emotionally bonded pairs, such as couples and twins, have detected spikes in neural activity in one individual that synchronize with periods when the other, in a separate, sensorially isolated location, is exposed to a flashing light or loud noise.2  Standish and colleagues replicated these findings using Fourier Magnetic Resonance Imaging (fMRI). One member of a volunteer couple, having been electrically and magnetically shielded, received a stimulus in the form of a flickering checkerboard pattern. The other was placed in a scanner wearing sensory isolating goggles and monitored for changes in brain activity. Correlations between the two were found at a statistically significant level (p = 0.001).3

In a related study, Standish and colleagues used functional magnetic resonance imaging (fMRI) technology to investigate claims of distant healing. Eleven healers claiming an ability to transmit healing energy over a distance were invited to the lab with someone who they considered potentially receptive to remote healing influence. The recipient was placed in the MRI scanner and isolated from all forms of sensory contamination, whether from the healer or elsewhere. The healer transmitted healing energy at random periods, the other periods acting as controls. Highly significant differences were observed between experimental (sending) periods and control (no sending) periods (p = 0.00013).  Standish concluded that some healers were able to make an intentional connection with a sensory isolated individual resulting in correlated changes in brain function.4

Later studies have captured qigong healing intention in a similar way, with the difference that the recipient in the experiments actually requires healing. Early results are promising, but larger follow-up is required to establish statistical robustness.5