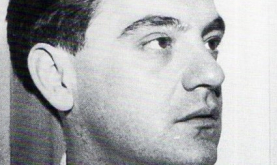 Luiz Antônio Gasparetto (1949-2018) was a Brazilian medium, psychologist, writer, performer and TV presenter. He became well-known in Brazil and Europe for mediumistic paintings attributed to deceased artists, from Leonardo da Vinci to Picasso.

Luiz Gasparetto was born in São Paulo on August 16, 1949 in a middle-class family of Italian immigrants. His parents were Aldo and Zibia Gasparetto; Luiz was their second son. Aldo became interested in the study of Spiritism when Luiz was still a baby. His wife, who later also found fame as a medium, started reporting anomalous experiences such as xenoglossy, for which Aldo found an explanation in Kardecist Spiritism. Soon Aldo and Zibia were reading aloud Allan Kardec’s The Gospel According to Spiritism to their children and holding Spiritist meetings at their home. Zibia practiced psychography (automatic writing) and eventually published books of spirit communications.1

Luiz was a nervous child, often unable to pay attention in class. Zibia enrolled him in a course at an art school, but he dropped out after eight months. Aged 13, he began to report an urge to draw, and during mediumistic sessions at his family home complained of tremors and stiffness in his arms. On the recommendation of a friend, his mother took him to a Spiritist centre where he suddenly entered a trance state and began to draw compulsively, to the consternation of those present. He agreed to attend séances regularly and his drawings, which included portraits, landscapes and abstract figures, gradually improved.2

The drawings were unsigned until Gasparetto visited the famous Brazilian medium Chico Xavier, who told him that one of them was created by the Dutch painter Rembrandt. From then on, Gasparetto began to sign his paintings with the names of renowned artists of the past, including Renoir, Toulouse-Lautrec, Degas, Modigliani, Manet and many others. His mediumistic painting sessions began to be widely attended.3

Gasparetto usually worked in near darkness, at tremendous speed, and only occasionally looking at what he was painting. He usually painted with crayon or used his hands to spread small amounts of paint on canvas or paper, mixing colours and outlining contours. He often used both hands simultaneously on a different part of the same picture. He also sometimes painted with his feet, employing only one foot or both alternately.

The average time for simple drawings was four minutes; more elaborate pictures took ten to twenty minutes. Some were completed in as little as thirty seconds. People present often recognized their deceased relatives or friends in anonymous portraits. Other paintings portrayed famous individuals such as Queen Elizabeth of England and Allan Kardec, founder of Spiritism. While painting, Gasparetto had someone hold the paper to prevent it being displaced by his fast and intense hand movements. He usually talked with that person during the trance – sometimes with a different voice, allegedly of the discarnate artist – to explain what he was doing and the meaning of the picture.

Gasparetto reported that his mood and sensations varied according to the picture and the deceased painter identified as its originator.4 He often remarked that he was unable to paint in the same way when he was in his normal state of consciousness. Early in the development of his mediumship he experienced doubts and wondered whether the paintings originated from his own imagination, after which he went through a difficult period, producing work of only average quality. He later attributed this to discarnate spirits trying to convince him that he could only paint with their collaboration. When he became convinced, the spirits returned, and his paintings improved again. Gasparetto also frequently explained his work as an attempt by the spirits to demonstrate survival after death.5

In later years Gsparetto experimented with other techniques and materials, producing sculptures and woodwork supposedly of mediumistic origin and apparently without practice or training.6

In 1974 Elsie Dubugras, a Brazilian journalist, came across  Gasparetto’s work while researching paranormal phenomena for her magazine Planeta, and sought the help of scientific investigators to study the case in more detail. Hernani Guimarães Andrade, a Brazilian parapsychologist, organized a group composed of physicians, journalists, photographers and parapsychologists, who set about making detailed observations of Gasparetto’s performances, paintings and mediumistic activities. According to Dubugras, the group concluded that the work was of genuinely mediumistic character.7

Dubugras then helped Gasparetto promote his work outside of Brazil. Sponsored by a German magazine called Esotera, he toured throughout Europe presenting his paintings.

Guy Lyon Playfair, a British journalist and psychical researcher, who met Gasparetto in 1974 in São Paulo, recorded his ‘astonishment’ at the quality of his mediumistic paintings.8  In a preface for Dubugras’s first book on Gasparetto, he wrote: ‘Luiz Antonio is not the first medium in the history of psychical research who has produced works of art while in an altered state of consciousness. But he is surely the most impressive to watch’.9 Playfair was particularly surprised by Gasparetto’s willingness to demonstrate his abilities in conditions that were far from ideal:

During his two visits to London in 1978 [Gasparetto] was filmed by BBC television under the most difficult conditions imaginable – under a dozen powerful spotlights, in a strange room full of people he had never met, one or two of whom were thoroughly skeptical towards his work. Later in 1978 he agreed to a session at very short notice for the delegates to the International Spiritualist Federation Congress. Here, although the audience was very sympathetic […] everything seemed to go wrong. One of the curtains refused to close, so that we could not make the room as dark as Luiz Antonio likes it to be. Then we could not find any music. When at last somebody produced a cassette of some religious music, it was clear that the artists were not happy with it, and finally the batteries of the machine playing the music went dead, although they were new. Despite these problems, Luiz Antonio not only amazed his international audience with the quality of the works he helped produce, but added an unexpected bonus in the form of a most convincing demonstration of survival, when he drew the portrait of a boy immediately recognized by one of the audience, whom the medium had not even met until then.10

Playfair also acknowledged that the thousands of works he produced were of uneven quality, and lamented that those produced during the BBC television session, seen by nine million people throughout Great Britain, were below the average.11

Analysis of Signature and Style

In 1988, Planeta published a series of signatures provided by Gasparetto, together with an analysis by a graphologist comparing them with the originals signatures of deceased painters. The signatures were obtained on August 6 during a session at the Spiritist Cultural Centre ‘Os Caminheiros’, a religious institution run by Gasparetto and his family. These signatures, made in less than three minutes on the front and back of a single sheet of paper, were of the Degas (in three versions), Toulouse-Lautrec (in full and abbreviated, as it appeared on the vast majority of his paintings), Monet, Rembrandt, Tarsila do Amaral, Modigliani, Tissot, Picasso (two versions), Gauguin, and Leonardo da Vinci.

Motoho Chiota, a graphologist, reported that that several factors stood in the way of a complete comparative analysis, for instance the fact that the artists used a brush while Gasparetto signed with crayon. Nevertheless, Chiota declared that Gasparetto’s signatures showed numerous similarities to specimens of the originals found in art books, notably those of Picasso, Degas, and Manet. He also noted that Leonardo’s signature was written backwards, as was the artist’s practice – a little known fact.12

According to Dubugras, a further analysis by Marco Antõnio Guerra, professor of visual arts at the University of São Paulo, compared the style of Gasparetto paintings to that of the deceased artist who was identified as the originator. This verified similarities of style, some of which, Guerra maintained, would be difficult to simulate without previous training or knowledge.13

Limitations of the Investigations

These investigations had important limitations. They appear not to have been reported in any scientific paper published in a peer-reviewed journal.   Although carried out by experts, the analyses were journalistic descriptions rather than detailed evaluations submitted to the scrutiny of the scientific community and followed by confirmatory analyses conducted by independent judges with double-blind procedures. Some of the apparent paranormal phenomena reported, such as resemblances between mediumistic portraits and the facial characteristics of certain deceased people might be explained in terms of subjective validation.

Painting with feet or simultaneously with both hands can be learned, and is not in itself paranormal. The ease and speed with which Gasparetto made the paintings, and also their originality, allegedly without prior knowledge of art, are worthy of scientific attention but are insufficient to demonstrate the mediumistic character of the experiences. These and similar problems involved in the parapsychological investigation of mediumistic paintings have been extensively discussed elsewhere.14

From Spiritism to New Age

Gasparetto completed his undergraduate course in psychology in Brazil, but returned often to Europe where he participated in television programs in countries such as France, Switzerland and Germany. He also travelled to the United States. After a period spent studying at the Esalen Institute in California he reconsidered many of his conceptions about Brazilian Spiritism, which he now considered ‘old-fashioned’, and redefined the course of his religious journey. He wrote: ‘When I returned to Brazil, already practising what I learned, my life changed radically: from a simple psychologist of my neighbourhood, I became a teacher of metaphysics, and began to offer courses to people [...] from several countries.’

This new phase is marked by the creation in the 1980s of a new institute, Espaço Vida e Consciência (now Espaço de Espiritualidade); this eventually replaced the Spiritist centre, which closed in 1995. Distancing himself from materialist psychological theories, as well as from Kardecist Spiritism, his activities now integrated New Age concepts and practices (such as alternative therapies, astrology, and tarot card reading) through courses and workshops dealing with issues related to spirituality, health, prosperity, and romantic relationships.

Gradually, his work as a painter medium declined in importance, and Gasparetto began to dedicate himself to other activities. In 1999, he stated:

…in Brazil, I hardly carry out mediumistic painting performances. I only do this kind of work abroad. The paintings were very important in promoting mediumship, mainly in the United States. But here, there is no need for that anymore, there are many mediums. The function is over. I still work with the spirits but in another way. It is a new way of spiritualization that encourages people to [...] use their own power.15

In subsequent decades Gasparetto published self-help books, some based on the teachings of his spirit guide Calunga. He also worked as TV and radio broadcaster. In the early 2000s, he started a theatre company called Cia das Luzes.

In February 2018, Gasparetto revealed that he had been diagnosed with lung cancer and he died on May 3. 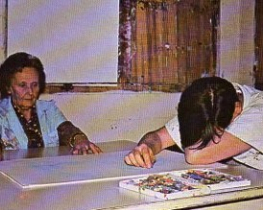 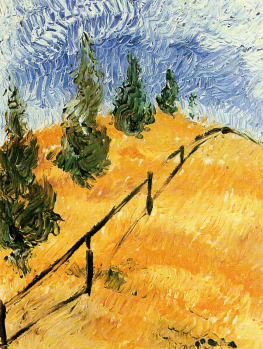 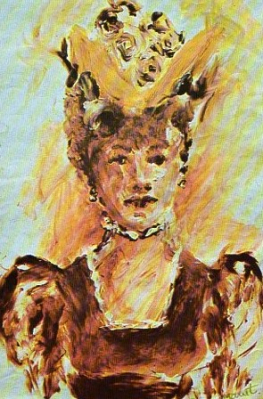 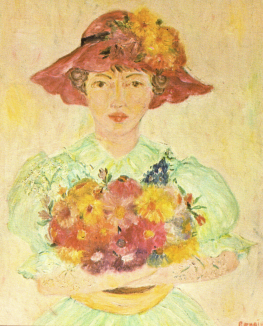 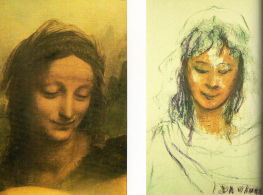