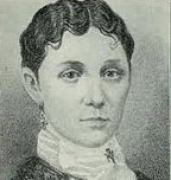 In this unusual nineteenth-century case, a the body of a 13-year old girl appeared for some months to be possessed by the spirit of a girl who had died twelve years earlier. The child now regarded her own family as strangers and instead showed affection towards the family of the dead girl, whose memories she exhibited as her own. The case became popularly known as the Watseka Wonder.

Mary Lurancy Vennum, known as ‘Rancy’, was born on April 16, 1864 in Watseka, Illinois, a small town 100 miles south of  Chicago. One day in the summer of 1877, when she was 13 years old, she complained of feeling unwell, then suffered a seizure and lost consciousness for about five hours. Upon regaining consciousness she told her family that she felt ‘very strange and queer,’ but she rested comfortably that night.

The next day, while apparently in a trance state, she said she could see spirits of the dead, including her deceased sister and brother.  Over the next two months she had a number of similar trance experiences,  describing ‘heaven’ and ‘angels.’  In September she appeared to return to normality.  Then in November she began experiencing severe stomach pains five or six times a day. The following month she entered a trance state and again began seeing ‘angels’.  These trances continued over the next seven weeks, during which time she often appeared to be in a state of ecstasy. Two local physicians and the family’s Methodist minister all concluded she had become insane and recommended she be sent to an asylum.

Asa Roff, a lawyer, contacted Rancy’s parents and persuaded them to first let the girl be examined by a Dr Stevens from Wisconsin. Roff explained that he had experienced a similar ordeal with his daughter Mary, who had died in July 1865 aged 18 (when Rancy was just a year old), and that he had regretted having placed her in a sanatorium.

Dr Stevens first visited the Vennum family in January 1878, accompanied by Roff.  They found Rancy sitting near the stove, looking ‘sullen and crabbed.’  When Stevens asked her name, she replied ‘Katrina Hogan’, giving her age as 63 and saying she was from Germany.   After this brief conversation she abruptly changed personalities and claimed to be a man named Willie Canning.  ‘Willie’ then started interrogating Stevens, asking about his beliefs, and whether he went to church, and liked to smoke and drink.   After an hour and a half, Rancy fell on the floor and went into a trance.  She then began answering Stevens’s questions ‘with rationality and understanding.’  She apologized for having such evil conditions about her and said she knew the evil spirits calling themselves Katrina and Willie.  Stevens suggested that she look around her for a higher, purer, more intelligent, and more rational spirit to control her.  Rancy then said there were a great many spirits willing to come, and that one ‘angel’ stepped forward giving her name as Mary Roff.    Asa Roff immediately identified her as his daughter.

Rancy then declared she would let Mary Roff take over her body for a period of time.  Her personality then changed from the wild and ungovernable girl she had been in recent months to become mild, polite, and somewhat timid.  She now claimed to know none of the Vennum family and said she wanted to go home.

Upon hearing of the situation, Mary Roff’s older sister, Minerva Alter, the wife of a physician, paid a visit to the Vennum home in the company of her mother, Ann Roff.  ‘There comes my ma and sister Nervie!’ Rancy exclaimed, using Mary’s pet name for Minerva, a name not heard by anyone since Mary had died.1 After that reunion, Rancy, as Mary Roff, became even more homesick and begged to be allowed to ‘go home.’   Because Rancy had become such a problem the Vennums reluctantly consented, and in February they sent Rancy to the Roff’s home.  She greeted her ‘Pa and Ma’ and each member of the family with hugs and shows of affection. Asked how long she would stay she replied, ‘The angels will let me stay until sometime in May.’2

Over the next three months, Rancy, as Mary, recognized old neighbors and friends.  For instance, when Mrs Parker and her daughter-in-law, Nellie came calling, Rancy greeted them as ‘Auntie Parker’ and ‘Nellie.’  Rancy asked Auntie Parker if she remembered when she (Mary Roff) and Nervie used to come to her house and sing, something which both Mrs Parker and Nervie both clearly remembered.  When another former neighbor visited, Rancy called her Mrs Lord, the name Mary had known her by when she was a widow, although by this time she had since remarried and become Mrs Wagoner.

Asa Roff frequently tested the girl by asking questions about Mary’s life.  On one occasion, he asked if she remembered a trip to Texas in 1857.  ‘Yes, Pa,’ she replied, ‘and I remember crossing Red River and of seeing a great many Indians, and I remember Mrs. Reeder’s girls, who were in our company.’3

During the first month in the Roff home, Rancy refused to eat, explaining to her ‘parents’ that her nourishment was coming from heaven and it was necessary for her to refrain from food until the body was ready. However gradually she came to eat with the family.

On February 19, Asa Roff wrote the following letter to Stevens:

You know how we took the poor, dear girl Lurancy (Mary).  Some appreciate our motives, but the many, without investigation and without knowledge of the facts, cry out against us and against the angel girl.  Some say she pretends; others that she is crazy; and we hear that some say it is the devil.

Mary is perfectly happy; she recognizes everybody and everything that she knew when in her body twelve or more years ago.  She knows nobody nor anything whatever that is known to Lurancy.

Mr. Vennum has been to see her, and also her brother, Henry, at different times, but she don’t know anything about them.  Mrs. Vennum is still unable to come and see her daughter.  She has been nothing but Mary since she has been here, and knows nothing but what Mary knew.  She has entered the trance once every other day for some days. She is perfectly happy.

You don’t know how much comfort we take with the dear angel.4

Roff further informed Stevens that during her trance states other spirits would frequently speak through her.  One day, the voice of someone who claimed to have lived and died in Tennessee spoke through Rancy and told him that Mary would retain control of Lurancy’s body until it was restored to good health.

Minerva Alter also wrote to Stevens about her sister, stating:

A few days ago Mary was caressing her father and mother, and they became a little tired of it, and asked why she hugged and kissed them.  She sorrowfully looked at them, and said, “Oh pa and ma! I want to kiss you while I have lips to kiss you with, and hug you while I have arms to hug you with, for I am going to heaven before long, and then I can be with you only in spirit, and you will not always know when I come, and I cannot love you as I can now.  Oh, how much I love you all.”5

On May 7, Rancy/Mary took Mary’s mother Ann Roff aside and told her that Lurancy Vennum was coming back.  A change of personality then took place and the girl asked Ann where she was, began crying, and said she wanted to go home.  However, after about five minutes, Mary returned to Rancy’s body.  On May 21, Asa Roff recorded in a letter to Dr. Stevens: ‘Mary is to leave the body of Rancy today, about 11 o’clock, so she says.  She is bidding neighbors and friends good-by … She tells me to write to Dr. Stevens as follows:  “Tell him I am going to heaven and Rancy is coming home well.”  She says she will see your dear children in spirit life … She talked most lovingly about the separation to take place, and most beautiful was her talk about heaven and her home.’6

At 11 o’clock, Rancy ‘returned’ and, now speaking to Asa Roff as if a stranger, asked to be taken to her home.    She lived a normal life from then on.  Rancy continued to live with her parents until her marriage to George Binning in 1882.  Two years later the couple moved to Kansas.  It was reported that Mary would occasionally take control of  Rancy’s body in subsequent years, but her husband objected to this and discouraged it.

After Rancy returned to her normal life Stevens compared her handwriting with that of Rancy during the three months period she was Mary and found them to be significantly different.

In 1879, Stevens published a report of the case, in which was included testimonials regarding the good character of Asa Rolf as well as several newspaper accounts of the story.  One such report, from the Iroquois County Times ended: ‘It is hard for even the most skeptical not to believe there was something supernatural about her.  If she was not prompted by the spirit of Mary Roff, how could she know so much about the family, people with whom she was not acquainted, and whom she had never visited ....’7

In 1890 Richard Hodgson, an investigator attached to the American branch of the Society for Psychical Research, visited Watseka and interviewed witnesses of the events. ‘I have no doubt that the incidents occurred substantially as described in the narrative by Dr. Stevens,’ Hodgson reported, adding that the only explanation other than the spiritistic one was that Lurancy had a ‘secondary personality’ with supernormal powers, a theory which he regarded as yet more fantastic.8

In a 1903 book, psychologist Frank Sargent Hoffman, not himself a witness to the occurrence, speculated that it was a case of ‘hysterical personation’. That is, Rancy had heard enough gossip about Mary Roff over the years that, having become mentally unbalanced and exhibiting the same symptoms as Rancy, decided to impersonate her. Similarly, Henry Addington Bruce, an American journalist, speculated that this was a case of multiple personality, in which a ‘secondary personality’ buried in Rancy’s subconscious surfaced and telepathically read the minds of the Roffs concerning Mary’s life, thereby tricking them into thinking she was really their daughter.

Hoffman, Frank Sargent (1903) Psychology and Common Life: A Survey of the Present Results of Psychical Research with Special Reference to their Bearings upon the Interests of Everyday Life, G. P. Putnam’s Sons, New York & London