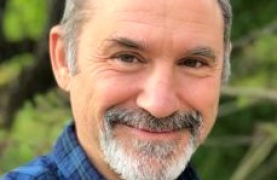 Mario Varvoglis is an American parapsychologist living in France. Since 1998, he has been President of the Institut Métapsychique International, a century-old foundation dedicated to psychical research.

Soon after starting his undergraduate studies, in the 1970s, Mario Varvoglis took up an appointment at the Maimonides Hospital dream laboratory, investigating telepathy in the ganzfeld. While completing his doctoral research at Adelphi University, he moved to Princeton (New Jersey) to work with Charles Honorton at the Psychophysical Research Laboratories (PRL). At PRL he conducted research on the links between micro-PK and consciousness, also contributing to the auto-ganzfeld telepathy studies.

In the mid-1980s, after meeting French parapsychologist Christine Hardy at PRL, Varvoglis moved to France. Realizing that the intellectual climate there was even less receptive to parapsychology than in the US, he set out to communicate, to both scientists and the general public, the field’s best results and implications He authored two general public books,1 contributed articles to interdisciplinary venues, and developed Psi Explorer, an educational CD-ROM with a range of psi tests and multimedia presentations of parapsychology.

In the late 1990s, he was asked to direct the Institut Métapsychique International (IMI), the key psi-research center of France.

Varvoglis tested 40 volunteers for their ability to predict the features of an ‘identikit’ face, an early police identification procedure, in order to understand aspects of psychic detection. Volunteers were asked to try to identify the four facial features (nose, lips, eyes, head shape) that would later be incorporated into a randomly selected composite image. In one condition, the volunteers had to consciously choose each of the four features from a pool of possibilities, as in a typical forced-choice procedure; in the other, they were presented with a psi timing task, whereby the pool of possibilities cycled rapidly on the screen and volunteers had to press a button whenever they felt was ‘the right moment’. The results showed evidence of precognition (p = 0.013), mostly from the timing (p = 0.006) task, rather than the conscious condition. This  suggested that ‘going with the gut’ is more effective than typical forced-choice strategies.2

Varvoglis later conducted research that coupled a binary precognition task with a mental optimization protocol.  Unselected participants were first immersed in an audiovisual environment to create a psi-conducive state of consciousness. For each trial, participants selected an opaque sphere that they felt contained a facial image. Once selection was made, the automated protocol randomly determined whether or not the sphere would be empty and whether or not hit/miss feedback would be given. Eighty-two volunteers contributed 3000 binary trials. The results were close to the chance expectation rate; however trials in which feedback was given (51%) were more successful than non-feedback trials (48.6%). Also noteworthy was the fact that experienced meditators showed a hit rate of 52.1% (for nine of the most experienced the rate was 54.1% (p = 0.01)) a finding consistent with previous results showing that meditators are adept at producing psi in controlled settings. Additional analyses indicated improvements in scoring over time for feedback trials, supporting the idea that volunteers were developing mental strategies to cultivate their precognitive ability. 3

With Charles Honorton, Rick Berger and others, Varvoglis was involved in the design and execution of automated ganzfeld telepathy experiments at PRL. The authors review and describe eleven well-controlled experiments that included randomized target selection and presentation, blind judging and automated data recording and storage. Targets included video clips (dynamic targets) and static images (static targets). Two hundred and forty-one volunteers completed 355 ganzfeld sessions, achieving a 32% hit rate where 25% is expected by chance (p = 0.002.) Performance on dynamic targets was significant, and there was a significant difference between dynamic and static targets. Telepathic accuracy was higher among people who knew each other rather than between strangers. Also, artists and musicians did far better than any other group, achieving hit rates close to 50%.4

Varvoglis has used gamelike user interfaces to test for PK on random number generators, hypothesizing that a playful – as opposed to ‘striving’ – mindset is conducive to positive results.5

More generally, Varvoglis has been interested in the relationship between PK and various aspects of consciousness – such as attention, intention and awareness. In his doctoral thesis work, he tested for the effect of feedback on both intentional and non-intentional PK in three computer-controlled studies. Forty-six participants were tested under varying feedback conditions, alternately instructed to engage either in controlling their own brain activity via EEG output or biasing a RNG as displayed on a computer monitor. Unknown to the participants, in some runs the visual feedback derived from the system they were not seeking to influence. Overall scoring across conditions and experiments was significantly greater when participants’ intentions and feedback were aligned (rather than conditions in which they received false feedback).6

Varvoglis and Bancel reviewed the micro-psychokinesis literature to determine whether ability is unique to a few gifted individuals or widely distributed throughout the population. They note that most PK studies on random number generators fall within the universalist approach, involving participants from the general population. The main exception to this rule was the research carried out by Helmut Schmidt who generally preferred to work only with selected individuals. His highly significant body of RNG-PK research involved intensive work with small numbers of selected individuals; most studies achieved statistically significant effects, and a third resulted in p values of around 0.001.

Varvoglis and Bancel contrasted Schmidt’s elitist approach with the universalist method adopted by the PEAR (Princeton Engineering Anomalies laboratory). PEAR tested a hundred unselected participants within a highly standardized RNG protocol, producing highly significant effects over twelve years (p = 0.0001), but these could not be reproduced in large scale multi-lab replication. The detailed analysis carried out by Varvoglis and Bancel reveals that most of the original PEAR effect was in fact due to just two very successful individuals, supporting the idea that PK ability is exceptional rather than universal.  They conclude that research generally supports the elitist approach of testing a few gifted individuals in the same way Schmidt did.7

Psi-Explorer was an interactive CD-Rom developed in the 1990s, aimed at immersing a player in the field of experimental parapsychology. It included a review of the experimental ESP literature, a battery of game-like psi tests, a library of case studies and a forum, which covered theories and models of psi.8

Varvoglis, M. (1986). Goal-Directed and Observer-Dependent PK : An Evaluation of the Conformance-Behavior Model and the Observational Theories. Journal of the American Society for Psychical Research 80, 137-162.

Varvoglis, M. (1988).  A Psychic Contest Using a Computer-RNG Task in a Non-Laboratory setting. Research In Parapsychology.

Varvoglis, M. (2014). Soul, Neurons, Particles or Mind-at large?  Exploring the boundaries of the Self. In Menon et al (Eds.) Interdisciplinary Perspectives on Consciousness and the Self. Springer: New York.