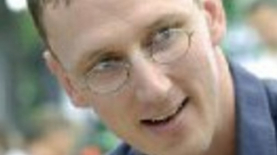 Markus Maier is a German psychologist whose work in consciousness theory has extended to include experiments in psychokinesis and precognition.

Markus Maier is professor of psychology at Munich’s Ludwig-Maximilians University where he heads the Emotion and Motivation research unit. His psychology research centres on understanding unconscious emotional and motivational processes and their impact on behaviour planning and decision making.

Maier also has an active program in psi research where his young team of Marissa Jakob and Moritz Dechamps are currently working on quantum-based models of consciousness and the relationship between mind, time, and matter. This research program broadly overlaps with the micro-PK paradigm in parapsychology.

Parapsychological research, notably with regard to micro-PK research, exhibits mysterious decline effects. Generalized Quantum Theory (GQT)1 is currently the most well-regarded attempt to explain psi effects as generalized acausal entanglement correlations, that, because of the ‘no-signal’ axiom – that information cannot be sent via entangled systems – causes initially robust psi effects to decline during replications.

When Maier and Dechamps analysed the results of their first two smoker studies2 (which used smoking related stimuli to elicit psychokineetic (PK) responses from smokers and non-smokers) from 297 participants they found a strong initial PK effect followed by a strong decline (as predicted by GQT and the Model of Pragmatic Information) with a subsequent recovery in PK performance during the third study giving an oscillatory effect across the entire three studies and 500 participants. Significantly, Maier’s team predicted this oscillatory pattern from previous experimental results and theoretical development.

Maier and Dechamps explain the pattern in entropic terms: PK ordering results in a loss of entropy which must be balanced later by a fall in PK performance. A recovery in PK scoring then occurs as the system allows for order to be injected again. This approach expands the theoretical work of Lucadou, Walach and Romer’s GQT.

Maier and Dechamps pre-registered a third study with 203 participants that predicted not only the continuation of the oscillatory pattern, as described above, but also an approximate PK scoring value based on the oscillation curve. Both predictions were confirmed; however, a comparison with 10,000 simulated random data sets for three measures – an area-under-the-curve analysis, a local maximum fit test, and an endpoint fit test – showed non-significant results.

Further exploratory analyses – including analysis of the highest-reached Bayes Factor (BF) over the course of the experiments, the overall orientation of the BF curve, and its transformation into oscillatory components via a Fourier analysis – showed significant differences between experimental and simulated data. This supports the approach of analyzing the temporal development of the PK effect rather than just the terminal value – a policy more parapsychology programs should adopt.3

Maier and Deschamps carried out a large study involving thousands of participants, with the aim of providing clear-cut evidence for or against the existence of micro-PK. An online experiment with 12,571 participants was conducted. Bayesian analysis (a statistical method that takes prior probabilities into account) revealed strong evidence for the null hypothesis H0 (BF01 = 10.07). Maier and Dechamps concluded that micro-PK did not exist in these data. However, closer inspection of the temporal change of the effect (how the effect modulated over time) suggested a non-random oscillative structure similar to that seen in the smoker study. Comparison with simulated random data revealed a marginally higher frequency in the experimental portion.4

Maier’s team members have carried out other PK research. Jakob is investigating the impact on PK performance of emotional needs, while Dechamps is probing the theoretical basis for PK. A recent mini-review found highly significant evidence5 across 23 experiments despite the strong emphasis on process-oriented research rather than proof-oriented research. The team conduct regular exchanges with leading German theoreticians.

Maier, Jakob and Deschamps performed replications of Daryl Bem’s implicit precognition experiments, with seven experiments to test whether negative stimuli presented in the future could result in an unconscious avoidance reaction. Most found evidence of retroactive influences, supporting Bem’s findings. Across the seven studies participants unconsciously avoided negative future outcomes with a mean effect size similar to that found by other researchers. The experimenters discuss these findings with regard to quantum models of the mind.6

Recently, Maier has been involved in a large multi-laboratory Bem replication that gave non-significant results overall but also revealed statistically significant temporal structure similar to the PK work described above.7

Dechamps, M.,  Maier, M. (2019). How Smokers Change Their World and How the World Responds: Testing the Oscillatory Nature of Micro-Psychokinetic Observer Effects on Addiction-Related Stimuli. Journal of Scientific Exploration 33, 406-434.