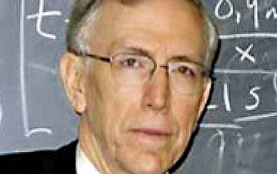 Michael Persinger was an American-Canadian psychology professor who carried out experiments aimed at discovering correlations between consciousness and physical phenomena such as geomagnetic activity. He was noted in particular for his ‘god helmet’, a device he claimed could induce paranormal-seeming experiences in the wearer by means of a weak magnetic field.

Persinger published hundreds of peer-reviewed papers and was a regular contributor to national and international television and radio programs, speaking on topics such as unusual experiences, climate change and religious experiences. In addition to his mainstream scientific activity, he engaged in less conventional work in parapsychology.

A major element of Persinger’s research involved the influence of magnetic fields on living processes. One study investigated the effect of exposure to a specific electromagnetic field (patterned both spatially and temporally) on mice injected with melanoma. Compared to the mice that received the sham treatment (where no actual magnetic field was applied) the experimental mice showed no evidence of tumour growth after 38 days, whereas the control mice evinced large tumours.1

In other research, Persinger exposed young adults to weak configurations of magnetic fields or sham fields where no actual magnetic field is produced. As with the mice research, the fields were spatially and temporally patterned and focused on the temporoparietal lobes, a brain area associated with mood.  A measure of mood states was taken before and after each session. The results indicated that the application of these patterned magnetic fields improved mood significantly compared to the sham field.2

Much of Persinger’s later work investigated the role of biophotons as carriers of information. One study investigated the biophoton emissions of environmentally stressed bacterial cultures. Bacterial cultures of E.coli were incubated for 24 hours and placed near a photomultiplier tube housed within a dark box. A second culture was placed in an identical dark box at a distance of five meters and received injections of hydrogen peroxide that were intended to provide an environmental stressor. Analyses revealed significant differences in the biophoton spectra with respect to whether a peroxide injection occurred or not, as might be expected. Significantly, the remotely located cultures also exhibited similar spectral changes during the peroxide additions.3 These data suggest bacteria might be able to communicate non-locally, and that biophotons are associated with this process.

In other work, Persinger was able to classify and characterize malignant and non-malignant cell types according to their biophotonic activity. Examination of the ratio of infrared and ultraviolet biophoton emissions enabled a differentiation of cancer and non-cancer cell types. Additionally, Persinger’s team was able to identify specific frequency bands (420-nm, 620-nm., and 950-nm) which classified cancer and non-cancer cell types.4

Persinger’s best-known research concerns the so-called God Helmet, a crash helmet fitted with magnetic solenoids to stimulate the temporal lobes. Although the strength of the magnetic field produced is miniscule (around 1 microTesla), Persinger claimed it could induce paranormal-like sensations.

In a classic experiment, subjects wearing the helmet and placed within an electromagnetically sealed Faraday cage were exposed to patterned magnetic fields based on the EEG output of the limbic system. Persinger hypothesized that exposure to such a pattern would activate the same brain structure it was produced from. He claimed that up to 80% of subjects reported feeling a sense of presence, which they tended to interpret as belonging to a deceased loved one, an angel or other supernatural entity.5 He hypothesized that experiences were caused by magnetic stimulation of the temporal lobes. A more stringent replication by a team at Uppsala University failed to support this, casting doubt on the initial findings. Subsequent replications have tended to be negative apart from a single high quality confirmation.6

Acting on a long-standing interest in the role of geomagnetic influences on human behaviour, Persinger examined 25 telepathy experiences in case studies reported by Ian Stevenson.7 He found a clear decrease in activity on the day of the report relative to the preceding and proceeding days. In a conceptual replication study, he examined 187 telepathy and clairvoyance experiences reported in the popular Fate magazine, finding a similar relationship with lower geomagnetic activity on the day of the event. This relationship was supported in a second tranche of 203 Fate reports.8

Persinger also investigated geomagnetic relationship in the context of other seemingly paranormal experiences such as UFO sightings. He found that such reports between 1950 and 1966 indicated not only an inverse relationship with geomagnetic activity – in keeping with the other research domains – but a positive relationship with tectonic strain. Putting these two findings together, Persinger predicted that the next 14 years – 1967 to 1981 – would also show a similar level of concordance with UFO reports. This proved to be the case: 80% of the temporal variation in such UFO sightings could be accounted for by Persinger’s modelling.9

The robust relationship found in natural settings is also evident in analyses of historical laboratory psi data. Persinger and Krippner10 examined the Maimonides dream telepathy experiments and found the most successful sessions occurred on geomagnetically quiet nights – around 10 nT (nanoTesla). Geomagnetic activity above 25 nT was associated with low scoring. Persinger also examined card-guessing data from the early Rhine period culled from 185 studies and found that the most successful years were also the quietest geomagnetically.11

Persinger has performed experiments to investigate this relationship. In one experiment, a single subject who had a history of ostensibly paranormal experiences was tested in 23 sessions each consisting of 40 Zener card guessing trials over a four-month period. Persinger found that psi performance was highly correlated (p = 0.001) with geomagnetic activity on days of testing. As with the natural settings research, a moderately strong negative correlation was found between the subject’s scoring and the geomagnetic activity.12

Using a sophisticated design, Persinger manipulated the presence of a geomagnetic field directly. In this study, 15 pairs of men and women who shared an emotional bond were tested under double-blind conditions, a complex magnetic field being applied without either the subject or experimenter knowing which session was active or sham. While one of the bonded pairs was exposed to these complex magnetic fields the other recorded any common memories that were shared in response to a randomly selected postcard from a collection of five postcards. Persinger found that the presence of a magnetic field significantly affected the subjects’ accuracy ratings of their statements in relation to the target.13

Persinger and his colleagues developed a new psi research paradigm, connecting distantly separated individuals through brain modulating technology, such that stimulation of one would affect the other. In the earliest study in 2003,14 Persinger found that stimulation of the temporal lobes of one pair of siblings with a ‘god helmet’ might elicit similar brain changes, measured by EEG, in the non-stimulated sibling located in a different room. A later experiment used the same protocol but with pairs of people unknown to each other, following a four-week period in which they became well acquainted. The pattern of results was repeated, with changes in the theta EEG (5-7 Hz) being recorded.15 No such information transfer was indicated when the experiment was repeated with pairs of strangers who had not gone through the acquaintance process.

In a third experiment carried out with Blake Dotta, Persinger was able to show entanglement between individuals separated in different rooms: when one was exposed to flashing lights the other person’s biophoton emissions were found to be in synchrony.16  This level of concordance only occurred with both of them wearing the helmet.

To test whether this ‘entanglement’ effect might extend across a large distance, Persinger experimented with five pairs of volunteers each at a 6000 kilometer distance from the other, wearing helmets that allowed for complex magnetic fields to be applied in synchrony. The experiment confirmed that randomly pulsed tones presented to one member of the pair could elicit EEG changes in the theta wave patterns of both.17

In the late 1990s Ingo Swann, a psychic well-known to the parapsychology community, was extensively tested by Persinger’s neuroscience research group. In the first experiment, Persinger probed for neural correlates of successful remote viewing performance in which there was a notable spike in the 7-Hz range including slow wave activity over the occipital lobes. A general neuropsychological assessment combined with Magnetic Resonance Imaging (MRI) indicated that Swann’s brain exhibited an unusual structural and functional organization within the parieto-occipital region of the right hemisphere. Persinger concluded that Swann’s remote viewing ability could be enhanced by the applied magnetic field and that neural signatures of successful remote viewing performance could be identified.

In a second study, Swann was instructed to remote view distant images on cards that were repeatedly exposed to patterned magnetic fields generated from either a Windows or DOS format. The DOS-exposed cards allowed for accurate remote viewing, while with Windows-exposed cards accuracy was much reduced. Persinger hypothesized that, unlike the simple DOS-generated field, the more complex Windows-generated magnetic field swamped the target. 18

In the late 1990s Sean Lalsingh Harribance, a Trinidadian psychic, was investigated extensively by Persinger’s team. In an initial experiment, Harribance handled sealed envelopes of photographed individuals while giving readings that were recorded and later transcribed. Persinger found that accurate descriptions were correlated with high alpha wave expression in the occipital region (located at the rear of the brain), while inaccurate readings were associated with the lowest alpha activities. Comparison of Harribance’s EEG spectra to those of the general population revealed decreased functioning across most of the brain regions, in particular the frontal and temporal lobes. This was confirmed by Single Photon Emission Computed Tomography (SPECT), which provides higher resolution of brain activity.19

Persinger, M.A. (1987). Spontaneous telepathic experiences from Phantasms of The Living and low geomagnetic activity.  Journal of the American Society for Psychical Research 81, 23-36.

Persinger, M. A., Koren, S. A. and Tsang, E. W. (2003). Enhanced power within a specific band of theta activity in one person while another  receives circumcerebral  pulsed magnetic  fields: a  mechanism of influence at a distance? Perceptual and Motor Skills 97, 877-894.

St-Pierre, LS, Persinger, MA (2006). "Experimental Facilitation of the Sensed Presence Is Predicted By The Specific Patterns of the Applied Magnetic Fields, Not By Suggestibility: Re-analysis of 19 Experiments". International Journal of Neuroscience. 116 (9): 1079-1095.