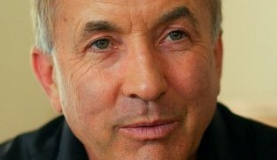 Michael Shermer is an American career sceptic, writer, part-time professor, lecturer and media personality. He founded the Skeptics Society and its magazine Skeptic, and widely disseminates critical views on anomalous, controversial and religious topics, including parapsychology and the paranormal.

Michael Brant Shermer was born on 8 September, 1954 in Los Angeles.  He grew up in ‘the quintessential American blended family of two half-sisters (same father, different mother), a step-sister, and two step-brothers’, as he describes in a written interview, moving between two homes as he grew up.1

In high school, Shermer was ‘born again’ into the burgeoning American evangelical Christian movement, inspired by his best friend and a ‘very dynamic and histrionic preacher’. After two years of informal Christian study he entered a Christian University, Pepperdine, intending to become a professor of theology. However the requisite PhD required proficiency in Hebrew, Greek, Latin and Aramaic, surpassing his interest in languages. He changed his major to psychology and graduated in 1976.2

‘Instead of the rhetoric and disputation of theology, there was the logic and probabilities of science,’ Shermer writes, explaining the beginning of his de-conversion; he was also troubled by his religion’s intolerance and hypocrisies. The final disillusionment came after his college girlfriend suffered a broken back in a car accident, and he desperately re-embraced Christianity to pray for her deliverance from paraplegia. ‘A just and loving God who had the power to heal would surely heal Maureen,’ Shermer writes. ‘He didn’t. He didn’t, I now believe, not because “God works in mysterious ways” or “He has a special plan for Maureen” … but because there is no God’.

Shermer earned his MA in experimental psychology at California State University, Fullerton, in 1978,3 then took a job as a writer for a bicycle magazine when he was unable to enter a PhD program. Inspired by his topic, he spent ten years as a serious bicycle racer and entrepreneur, keeping his hand in academia by teaching a Psychology 101 course. In 1991, he was awarded his PhD in history of science from Claremont Graduate School.4

Shermer gives 6 August, 1983 as the date he became a scientific sceptic, and attributes it to the failure, over years, of a plethora of unconventional health practices to heal his cycling ailments.5 He co-founded the Skeptics Society and began publishing Skeptic magazine in 1992, writing sceptical articles for major publications. He also made media appearances as a hobby. ‘As it grew, I realized by the late 90s that I could do this full time,’ he writes. ‘Publishing magazines, writing a monthly column for such a large-circulation magazine as Scientific American, writing books, and doing television and radio shows gave me access to a much larger classroom than I could ever reach in a brick-and-mortar building’.

Michael Shermer lives in Altadena, California with his wife, Jennifer Graf, a native of Germany whom he married in 2014. He has one child, a daughter, Devin Ziel Shermer.

Michael Shermer is first and foremost a writer; though he studied experimental psychology, he does no experimental research. He contributes opinions, essays and reviews to publications as prestigious as the Wall Street Journal, the Los Angeles Times, Science and Nature, and wrote a monthly column entitled Skeptic for Scientific American from April 2001 to January 2019. Shermer has also appeared on TV shows including 20/20, Dateline, Charlie Rose, Oprah, and Larry King Live, and been interviewed in many documentaries aired on educational TV channels and networks.6

Shermer sought for some years to take the sceptical message onto TV with his own show, and finally landed a deal with Fox Family Channel. The series Exploring the Unknown ran for 13 hour-long episodes over 1999 and 2000, co-hosted and co-produced by Shermer. The title, he admitted, was purposely deceptive: ‘This maximally equivocal name was chosen to as not to tip our hand to either viewers or potential guests as to the sceptical nature of the show…’7 Segments can be found on Shermer’s YouTube channel, here. A fuller list of Shermer’s media appearances can be found on his website.

As well as sceptical critiques, Shermer disseminates opinions about other issues, including science in general, science and morality, the creation versus evolution debate, Holocaust denial, libertarian politics, gun control, capital punishment, racism and many more. He rejected claims of human-caused climate change until 2006 when he admitted in Scientific American that his position was no longer tenable in the face of mounting evidence.8

Shermer was awarded the Philip J Klass Award ‘for outstanding contributions in promoting critical thinking and scientific understanding’ in 2006 by the National Capital Area Skeptics, and the Isaac Asimov Award in 2001 by the New York Area Skeptics.9

Psi researchers consider Shermer’s sceptical critiques to be based on a superficial understanding, pointing to frequent factual errors and sometimes misrepresentation.10

With regard to Shermer’s critique of past life research, James G Matlock writes:

Michael Shermer [2018, p. 100] maintains that ‘one need not read deep in the literature’ to see that the identification of a previous person in a reincarnation case is due to ‘patternicity—the tendency to find meaningful patterns in both meaningful and random noise’ (his emphasis). However, it is clear that Shermer has concluded this precisely because he has not read deeply in the literature. A reincarnation interpretation of the cases is founded on the veridical nature of the memories, behaviors, and physical signs, but rather than confronting this veridicality, Shermer and other skeptics ignore it or try to explain it away.11

In an article in USA Today (Feb. 26, 2003) about my book The Sense of Being Stared At, And other Aspects of the Extended Mind, [Shermer] was quoted as saying, ‘The events Sheldrake describes don’t require a theory and are perfectly explicable by normal means’. It turned out he could not substantiate this claim, and he admitted that he had not even seen the book. I proposed an online debate. He accepted this challenge in March 2003, and said he would ‘get to it soon’. In May that year he told me, ‘I have not gotten to your book yet’ … Apparently he never did.12

In October 2014, Shermer published an article in Scientific American in which he described a seemingly paranormal experience of his own. Three months earlier he had married Jennifer Graf, from Köln, Germany. Graf had been close to her grandfather, who died when she was sixteen, and had kept some of his possessions as heirlooms, including a 1978 Philips 070 transistor radio. Shermer inserted new batteries, but could not make it work, and it was placed in the back of a desk drawer in the bedroom and forgotten. On the day of the wedding, Shermer writes,

Being 9,000 kilometers from family, friends and home, Jennifer was feeling amiss and lonely. She wished her grandfather were there to give her away. She whispered that she wanted to say something to me alone, so we excused ourselves to the back of the house where we could hear music playing in the bedroom. We don’t have a music system there, so we searched for laptops and iPhones and even opened the back door to check if the neighbors were playing music. We followed the sound to the printer on the desk, wondering – absurdly – if this combined printer/scanner/fax machine also included a radio. Nope.

At that moment Jennifer shot me a look I haven’t seen since the supernatural thriller The Exorcist startled audiences. “That can’t be what I think it is, can it?” she said. She opened the desk drawer and pulled out her grandfather’s transistor radio, out of which a romantic love song wafted. We sat in stunned silence for minutes. “My grandfather is here with us,” Jennifer said, tearfully. “I’m not alone.”

Later that night we fell asleep to the sound of classical music emanating from Walter’s radio. Fittingly, it stopped working the next day and has remained silent ever since.

Had this happened to someone else, Shermer continues, he might have suggested ‘a chance electrical anomaly and the law of large numbers as an explanation – with billions of people having billions of experiences every day, there's bound to be a handful of extremely unlikely events that stand out in their timing and meaning. In any case, such anecdotes do not constitute scientific evidence that the dead survive or that they can communicate with us via electronic equipment.’

Jennifer is as skeptical as I am when it comes to paranormal and supernatural phenomena. Yet the eerie conjunction of these deeply evocative events gave her the distinct feeling that her grandfather was there, and that the music was his gift of approval. I have to admit, it rocked me back on my heels and shook my skepticism to its core as well. I savored the experience more than the explanation.13

Heavens on Earth: The Scientific Search for the Afterlife, Immortality, and Utopia. 2018, New York: Henry Holt.

Sheldrake, R. (2014). Michael Shermer’s Attacks: Michael Shermer and ‘The Sense of Being Stared At’.  [Published online at Skeptical About Skeptics.]

Shermer, M. (2014). Anomalous Events That Can Shake One’s Skepticism to the Core. Originally published under the title ‘Infrequencies’ in Scientific American 311, 4, 97 (October).