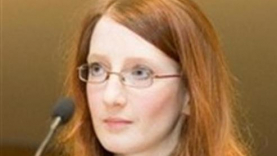 Nicola Holt is a British psychologist and psi researcher, whose work has focused on the relationship of creativity and other personality traits with anomalous experiences.

Nicola Jane Holt gained her doctorate at Northampton University’s Exceptional Experiences and Consciousness Studies research group, exploring the relationship between creativity and anomalous experiences as a research associate with Professor Chris Roe. Her subsequent post-doctoral work has included experimental work on schizotypy, paranormal belief, creativity and conversational analysis at the University of York. Holt’s current research at the University of the West of England is concerned with anomalous experiences and mental health and artistic involvement and well-being, developing methods to tack fluctuations in states of consciousness in everyday life. Additionally, she teaches courses on individual differences, applied psychology, consciousness and the arts and mental health.

Holt edited the Paranormal Review from 2003-2014 and chaired the annual Parapsychological Conference in Paris in 2010. She has won awards for her doctoral research, including the Eileen Garrett Scholarship (2002), the Gertrude R Schmeidler Outstanding Student Award (2006) and the Frances P Bolton Fellowship (2009).

Holt has carried out research seeking a deeper understanding of the processes seen in ganzfeld telepathy experiments.

In her early work as a research associate at the University of Northampton, Holt considered the role of the sender during ganzfeld telepathy experiments. A random number generator placed near the receiver acted as a proxy receiver during a ganzfeld sending period, randomly picking statements. Independent judging gave a hit rate of 35% to the human receivers and 32.5% to the RNG-generated ‘mentation’, suggesting a distant influence of psychokinesis on the mentation and utterances of the receiver in a ganzfeld experiment.1

In a test of the influence of receiver expectancy, Holt conducted 40 trials with participant pairs. The ganzfeld sessions were randomized to one of the four possible conditions, with both the experimenter and receiver remaining blind to the selection. During the no-sender trials the sender was engaged in an alternative task. The overall results were within chance. There was also no effect from sender role (active or distracted), nor did receiver expectation, of whether or not there was a sender, influence psi-scoring. However, there was a non-significant but trending correlation between psi performance and receivers who had practised a mental discipline (p = 0.1). These results suggested that whether or not a sender was actually present may have been more important than receiver expectancy in this regard.2

In a ganzfeld experiment in which ‘sender, no-sender’ conditions were used, and the receiver was unaware which applied, the results indicated no difference in scoring.  A repetition was made to gain more understanding of the nature of the sender-receiver relationship, in which the degree of randomness of the target systems altered, from low random sources (random number tables) to intermediate (pseudo-random number generator) to high randomness (true random number generator). Additionally, the trait of stability of the sender was measured. Holt found a very significant three-way interaction effect (p = 0.001) between target randomness (otherwise known as ‘lability’), the degree of the sender’s psychological stability and psi scoring: the most positive outcomes were produced by highly stable senders influencing highly random (labile) systems.3

In a 2007 study with Simmonds-Moore, Holt compared psi performance in the ganzfeld with a matched waking ESP condition.5 The researchers anticipated an interaction between the personality trait of schizotypy, the state of consciousness as manipulated by experimental condition, and psi performance. Twenty-six participant pairs completed both experimental conditions in a counter-balanced order. The receivers also completed questionnaires aimed at measuring levels of both schizotypy – a measure of the degree to which one experiences dissociative and imaginative states of consciousness – and temporal lobe excitability, which has been associated with putative psi experiences in the literature. Analysis of results failed to find a significant psi effect for either the ganzfeld (p = 0.72) or the waking control condition (p = 0.48). Additionally, Holt found no significant correlations between scores on personality scales and psi performance, in either condition. None of the correlations between personality and psi performance differed significantly from one another between the two experimental conditions.

A more detailed cluster analysis of scoring on the personality scales and psi-scoring suggested a possible but non-significant interaction pattern indicating marginally better psi performance among negative schizotypes (those who experience thought disorders and anxiety) in the ganzfeld compared to the waking state condition.

In a 2012 book chapter, Holt discusses the relationship between anomalous experiences and mental health, examining how both contribute to creativity.6  She considers how anomalous experiences might link with creativity, and comprehensively reviews the correlational and experimental evidence in support of such an association. (Holt is still doing work in this area, including two book chapters and a research study in which she found new evidence for a relationship between positive schizotypy and artistic creativity.7)

When it comes to the role of anomalous experiences and creativity, the evidence is more tenuous of a link and consequently more robust explanatory models are required such as neurocognitive, affective and trait models. In the final part of the chapter, Holt reflects upon the implications of this literature for understanding mental health and wellbeing, and whether creativity might actually be a protective factor against ill health, and acting as a doorway into the world of anomalous experiences.

In her doctoral work, Holt developed a novel protocol for recording impressions among artistic participants during a free-response home-test aimed at boosting any ESP signal. Contrary to expectation, creative artists did not score higher than matched non-creative controls, although they did perform at the same level as previous research. This is because the control participants did better than expected. The result led Holt to reject her affective openness hypothesis that predicted superior ESP ability for artists during some states of consciousness. Instead, Holt argues that previous research following similar protocols might have failed because the relaxing home environments were disproportionately boosting performance of controls.8

Roe, C. & Holt, N. (2006). Assessing the role of the sender as a PK agent in ESP studies: The effects of strategy (‘willing’ versus ‘absorption’) and feedback (immediate versus delayed) on psi performance. Journal of Parapsychology 70, 69-90.

Simmonds-Moore, C. & Holt, N. (2007). Trait, state, and psi: A comparison of psi performance between clusters of scorers on schizotypy in a ganzfeld and waking control condition. Journal of the Society for Psychical Research 71, 197-215.