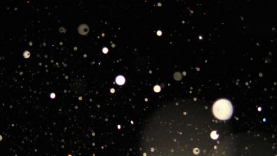 ‘Orbs’ is the term used to describe the globular light anomalies often seen in photographs and video film, which are sometimes attributed to the presence of ghosts, spirits or angelic beings.  Paranormal investigators consider the phenomenon to have normal causes, mainly the effect of light reflected by dust, pollen and other airborne material.

The term ‘orb’ is widely used by paranormal enthusiasts to describe a wide variety of photographic and visual phenomena. It derives from the appearance of white or grey circular anomalies which may be observed in some photographs, predominantly those taken using digital cameras. The term is now extended to describe the appearance of almost any bright spot, shape or coloured region which may appear within photographs or on video footage, or which are reportedly observed by the unaided eye.

It is uncertain how ‘orb’ became the generally accepted term for this group of phenomena. The late ‘Doctor’ Dave Oester of the International Ghost Hunters Society claimed to have invented it,1 but this cannot be substantiated. It is more likely that its widespread acceptance derives from its use in paranormal-focused Internet discussion forums in the late 1990s.

The alternative term ‘light anomaly’ seems to have been first used on the British television series Most Haunted. Both were employed interchangeably to describe moving discs of varying brightness that occasionally appeared on footage obtained in near darkness using video cameras in infra-red night vision mode. In the show’s later series ‘light anomaly’ became predominant.2 Either is now used to describe the appearance of almost every form of unexpected bright spot and shape, although ‘orb’ is usual with still photographs and ‘light anomaly’ more so with video footage.

Other terms are sometimes used to describe the phenomenon, such as ‘light-ball’, ‘spirit-orb’ and ‘ghost-orb’.

The orb phenomenon most commonly manifests as one or more anomalies within an image. Characteristically these have an overall circular appearance, are of white or grey colour; a bright annular ring surrounding the central disc may also be seen. Individual anomalies may appear to have a wide variation in size, overall brightness and colour, and appear either almost transparent, translucent or occasionally opaque. White or shades of grey are the predominant presenting colour, but those with a full spectrum of colours from red to blue and including multiple colours, may also be seen.

Individual orbs commonly appear to have regions of varying brightness, sometimes giving rise to a claim that faces may be seen. In addition to the discoid shape, orbs and light anomalies which have geometric shapes (for instance hexagonal) and elongated forms are also commonly reported.

The widespread use of digital cameras by paranormal investigators, which began in the latter years of the twentieth century and has now become ubiquitous, has led to claims that the technology can in some manner capture evidence of previously unobserved paranormal phenomena. Similar anomalies had previously been observed in photographs taken using film-based cameras, although claims regarding their paranormality was usually restricted to photographs purporting to show phenomena such as the will-o’-the-wisp or ball lightning.

It is not known how or when the belief that orbs represented some form of paranormal phenomenon began. Most likely it originated in Internet forums and chat rooms, where people shared their discovery of these anomalies appearing in their photographs and videos. The belief quickly became widespread within the paranormal community and is often repeated in the mainstream broadcast and print media, occasionally endorsed by celebrity accounts and experiences. For example in September 2008, television presenter Noel Edmonds claimed during a BBC news programme that his deceased parents followed him around in the form of two melon sized orbs. Edmonds described these as ‘being little bundles of positive energy’, adding that they ‘look like little round planets but they come in all shapes and sizes’ and that they are only capable of being photographed by digital cameras’.3

The belief has been reinforced by the repeated representation of orbs as a paranormal phenomenon on popular ghost hunting television shows in countries such as the UK, the US, Australia and Canada. Orbs continue to be regularly described as paranormal in the mainstream media and social media.

Explanations regarding the paranormal or supernatural nature of the phenomenon are extensive and vary widely. The most common states that it constitutes evidence of ghosts and spirits.4 Others propose that it represents energetic emissions of angelic or otherworldly beings.5 Many people claim orbs are capable of demonstrating intelligence, able to respond to requests and instructions from investigators.6 However, all such explanations lack evidence and remain to be substantiated.

Several books describing the putative paranormal nature of orbs have been published.

German born physicist Klaus Heineman is an influential promoter of orbs as a paranormal phenomenon. In his books The Orb Project (2007)7 and Orbs: Their Mission and Messages of Hope (2010)8 he and his co-authors expound his theory that orbs are energetic spiritual emanations that have purpose and intelligence.

Diana Cooper and Kathy Crosswell take a different view in their books Enlightenment Through Orbs (2008)9 and Ascension Through Orbs (2009),10 claiming that orbs are a physical representation of angels and ‘ascended masters’.

The widely held idea that orbs are paranormal has been challenged by researchers in the UK and US, who have carried out experiments including the use of stereo digital photography.

Opponents of paranormal claims argue that orbs and light anomalies are the result a well understood process. They assert that minute airborne particles – dust or pollen and water droplets in the form of rain drops and mist - cause the light from an on-camera illumination source such as the flash to reflect back towards the image sensor, leading to blurry spots and circles in the final image. Many have a circular appearance, a results of the camera’s inability to correctly focus on the material.11 Furthermore, in order to cause the light to reflect towards the image sensor, the airborne material must be physically close to the camera and located within a few degrees of the lens’ central axis (Fig1). 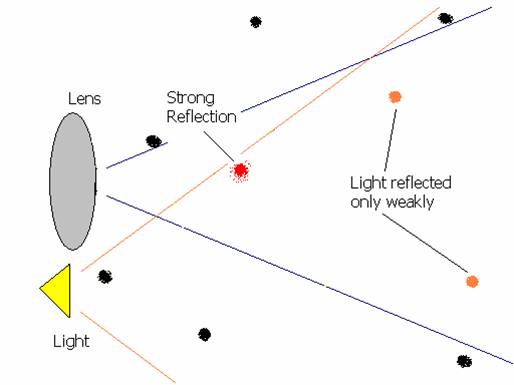 Critics also draw attention to numerous examples of orbs reported by other users of compact digital cameras, who treat them as an annoying anomaly caused by the design of the camera.

In 2012, camera manufacturer Fujifilm responded to customer complaints about white orbs appearing in photographs taken by their digital camera models.12 Fujifilm, Sony and other camera manufacturers now routinely include information in user manuals for their compact models regarding the appearance of white circular spots in flash photographs (Fig2). 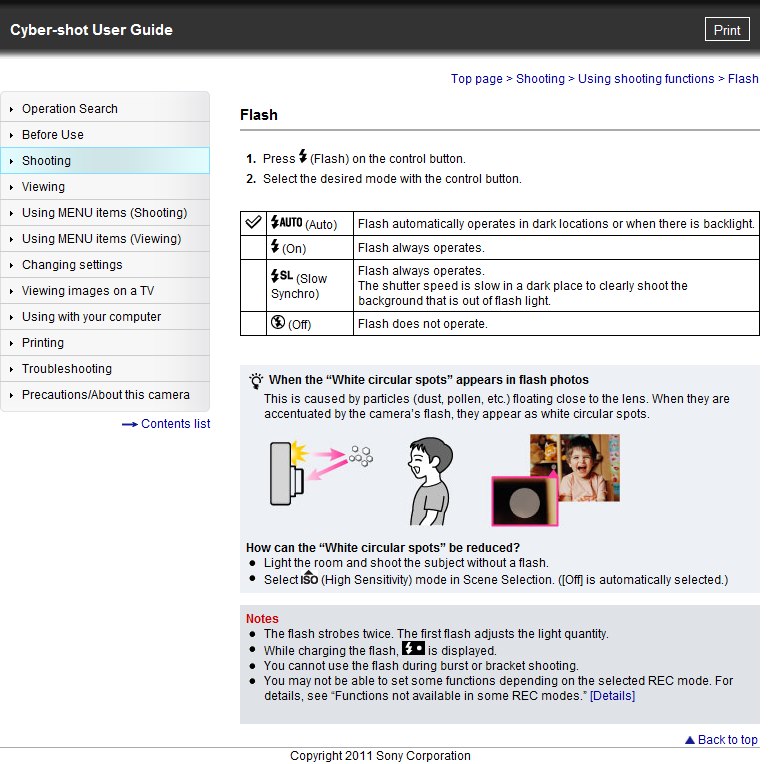 Some investigators attempted by experiment to replicate the production of orbs and light anomalies within their own photographs and videos.  In 1999, members of the Association for the Scientific Study of Anomalous Phenomena (ASSAP) threw flour, cinnamon powder and other material into the air in front of a compact digital camera, resulting in the production of numerous orbs.13 As a result of this experiment, and following further work, ASSAP produced an ‘orb-zone’ theory which describes the mechanisms whereby orbs and other light anomalies may be produced by some digital cameras.14

Around the same time, members of the investigation group Para.Science conducted similar experiments in which flour and talc were blown in front of a compact digital camera, leading to the production of orbs.  The group also carried out experiments to establish the cause of moving light anomalies in video footage taken by cameras using built-in infra-red illumination.

The group concluded that the most likely explanation was airborne material reflecting light towards the image sensor. This was particularly likely to occur when using cameras and video cameras which were physically small and compact in size and when built-in illumination located close to the lens had been used.

In 2009, Para.Science directly tested the orb-zone hypothesis with an extensive series of photographs using a stereo digital camera. The conditions were identical to those where orbs were being reported by other paranormal investigators: during investigations of purportedly haunted locations in which the camera was used in the same manner and with the same settings. The results demonstrated that airborne material, located physically close to the camera and within a few degrees of the lens axis, could reliably cause orbs to manifest, strongly supporting the orb-zone hypothesis (Fig 3).15 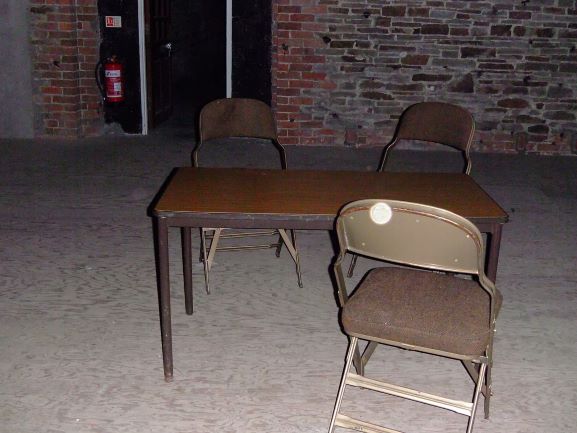 Periodically, other investigators have carried out studies which replicated the production of orbs and light anomalies. Independent researcher Troy Taylor concluded from his own experiments that orbs were being produced by airborne material reflecting light towards the image sensor.16 Benjamin Radford carried out experiments that led him to the same conclusion.17

Despite the overwhelming evidence against it, most ghost hunters continue to believe that not all orbs are produced by normal means, and that at least a small percentage have a paranormal origin,18 frequently asserting this in articles and other media. They attribute different meanings to orbs of varying colour, size and shape, and describe methods by which an orb produced by photographing airborne material can be differentiated from a genuinely paranormal orb.19

Orbs as a Visual Phenomenon

Orbs that appear as a visual phenomenon are also commonly reported in social media comments and Internet chat forums.20 Witnesses claim to see lights of varying intensity and a wide spectrum of colours. Most often the light is said to be circular, although other shapes are reported; some describe the orb as having a surrounding halo and appearing to move. As with orbs in photographs and videos, these experiences are also considered to be paranormal and suffer from a similar lack of substantive supporting evidence.21

Several known mechanisms are known to produce visual phenomena that may appear orb-like. They may be symptoms of an eye disease or other medical condition such as migraine or Charles Bonnet syndrome. 22Another is phosphenes, experienced as light flashes as a result of trauma or pressure to the eye or optic nerve, or idiopathically or as the result of taking medication and drugs.23 Magneto-phosphenes, caused by exposure of the eye or optic nerve to fluctuating electromagnetic fields and radiation, were first reported by high flying pilots and astronauts but may also occur in terrestrial situations.24

Reports of orb like phenomena pre-date the invention of photography and are extensive throughout our culture. There are numerous accounts of ghost lights, will-o-the wisp and other luminous phenomena in folklore and mythology. Often these occurrences have a paranormal association which may vary by region and country and are referred to by different names.25

Unusual lights described in similar terms to orb phenomena have been reportedly been seen at sites throughout the world, many having strong associations with mythology and folklore. Sometimes these lights are attributed to ghosts and hauntings, such as the Welsh ‘Canwyll Corph’ (corpse candle) which are described as small moving spheres of light.26

Orbs and orb-like lights have also attracted the attention of ufologists, who refer them as spooklights and earthlights: research regarding their nature has so far proved inconclusive.27