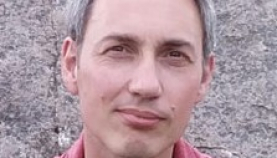 Paul Stevens is a psychologist who holds appointments at the University of Derby and the Centre for Alternative Technology. He has carried out parapsychological research emphasizing the role played by the environment in psi expression. The focus of his mainstream research is on applications of Gaia theory, ecopsychology and Biological Psychology to wider human-environment relationships.

Research by Stevens and others has pointed to a relationship between the output of a random number generator and geomagnetic field strength,1 even in the absence of directed mental intention.2 However, the direction of geomagnetic influence on micro-psychokinesis ability varies from positive to negative across studies. In order to understand this variation Stevens introduced the idea of stochastic resonance – that weak signals can sometimes be boosted by background noise instead of simply being swamped. For research in psychokinesis (PK), this entails that the weak geomagnetic signal is boosted by the local noisy magnetic environment allowing for a greater micro-PK effect. To model this experimentally, Stevens arranged for a random event generator (RNG) to be located inside a pair of  Helmholtz coils programmed to randomly create magnetic fields of varying strengths. At the same time, Stevens collected geomagnetic field data from the geological survey. Analysis revealed two peaks of RNG activity around 1 microT (a measure of local magnetic field strength) across 3 of 4 major geomagnetic field indices – the fourth index showing a peak at 25microT. Notably, the RNG effect sizes were an order of magnitude higher than those found in typical micro-PK research. This gave some support to the Stochastic Resonance hypothesis.3

Collaborating with parapsychologists at Northampton University, Stevens programmed a study probing the relationship between ESP and PK performance, using a common protocol to control for expectancy and experimenter effects. Forty participants completed a computer-based game in which half the runs were presented to them as PK runs and the other half as ESP runs, although in fact the nature of the runs (ESP or PK) was determined randomly by the computer. Overall scoring was at chance, preventing firm conclusions from being drawn from the lack of any significant relationship between performance in the 4 conditions (actual and camouflaged ESP and PK runs) and psi scoring. Of the psychological measures, only anxiety showed a relationship.4

Parapsychological research has frequently demonstrated long-range interactions between pairs of sensorily isolated individuals, in which, for example, a strong brain signal created in one of the pair by an unexpected startle effect (loud noise, flashing light) is later found to synchronise exactly with a similar, unexplained spike in the EEG readout of the person in a distant location.

Stevens and Marios Kittenis investigated the extent to which the degree of emotional bonding between pairs of individuals might affect this kind of distant PK influence. Forty-one participants were assigned to one of three groups: emotionally close individuals (related); pairs of recent strangers (unrelated); and single individuals who remained unpaired. Related pairs spent some time alone before simultaneously listening to a recording of a relaxation procedure, which was followed by fifteen minutes of continuous drumming, in order to induce a shared state of consciousness. During this time the ‘sender’ was exposed to a flashing light at random times while the receiver’s brain was monitored by an EEG. For unrelated pairs, the initial alone time was omitted. In the related pairs group, statistically significant correlations were found between light stimulation periods experienced by one individual and the corresponding brain activity in the distant partner (p = 0.023). The unrelated pairs showed a positive but smaller effect. Overall, the results were significant (p = 0.007).  As expected, unpaired individuals showed no brain correlations with light flashes triggered in an empty room at a distance.

Stevens tested the Dyadic ESP Hypothesis, in which, in a free-response paradigm such as Ganzfeld telepathy, feedback received by the sender in the form of receiver mentation facilitates a ‘psychic boost’ to the sender to transmit a psychic signal. This signal is not necessarily information-based and could be physiological in nature – anything that helps the receiver vocalize the most relevant mentation. The experiment had two conditions: in one, the sender received false feedback of receiver mentation; in the other, receiver skin-conductance was recorded during mentation. Overall scoring was at chance level, but there was a significant difference in skin conductance levels between target relevant and non-relevant material (p = 0.04). Overall arousal increased in both conditions, suggesting receivers were responding primarily to the sender’s perception.5

In research reported in 2020, Stevens  describes a remote viewing study in which subjects were asked to describe a location being visited by an agent. Thirty-three sessions were carried out online and 27 in-person. There was a suggestive overall trend (p = 0.12) that was significant for online sessions (p = 0.02). A random number generator (RNG) constantly running at each location deviated significantly for successful sessions only (p = 0.03), suggesting that future studies could use RNG activity as a predictor of remote viewing outcomes. Interestingly, independent judging of subject reports returned significantly below chance scoring (p = 0.02), indicating that useful information in the reports was influencing the judging process in an unexpectedly negative way.6

Chauvin, R. & Varjean, B. (1990). Is it possible to strengthen the psi effect using a very weak magnetic field? Journal of the Society for Psychical Research 56, 96-97.

Stevens, P. (2005). The Effect of Weak Magnetic Fields on a Random Event Generator: Reconsidering the Role of Geomagnetic Fluctuations in MicroPK Studies. European Journal of Parapsychology 20, 35.