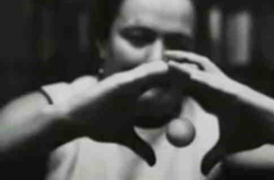 Limited but significant psi research has been carried out in Russia since the 19th century.

Russian public interest in psi-related subjects such as shamanism and non-medical healing existed long before the start of systematic research. The widely publicized activities of the mesmerists, and later the hypnotists, were mainly responsible for the strengthening of this interest, which was further stimulated by the rapid growth of the Spiritualist movement in the mid-19th century. The so-called ‘higher phenomena’ of mesmerism and hypnosis such as community of sensation and travelling clairvoyance - or ‘remote viewing’ as it has come to be known - were of special importance to scientifically minded observers such as professors A. M. Butlerov and Nikolai Wagner.

The visit to Russia of D. D. Home in 1871 intensified this interest, as had an earlier tour by Danish hypnotist Carl Hansen. In 1875, the Physical Society of the University of St. Petersburg set up a committee to investigate psi phenomena, chaired by Dmitri I. Mendeleyev, the first Russian scientist to win worldwide renown, for his periodic table of elements. By then, a number of mesmerists and hypnotists such as Pashkov, Betling, Artemsky and Feldman had enjoyed brief celebrity, before fading into obscurity, though reports of some of their most successful feats were published in Rebus, a ‘Weekly Journal of Psychism’, which appeared between1881 and 1916. Some of these were described in great detail, such as the study by mental hospital superintendent Dr AN Khovrin of the clairvoyant abilities of his patient ‘Miss M.’1

The publication in 1895 of Gustave Le Bon’s Psychology of Crowds aroused official interest, though more for political than scientific reasons. It is known to have influenced Hitler and Mussolini as well as the early Bolsheviks, notably the author Maxim Gorky, who was interested in the possibility of mass telepathic hypnosis, and may have helped make the study of this politically as well as academically acceptable, thanks to his personal influence on Lenin. The University of St. Petersburg (renamed Leningrad following the death of Lenin in 1924) soon established itself as the centre of academic psi research, dominated by two outstanding scientists, the internationally known reflexologist Vladimir M Bekhterev (1857-1927) and his pupil, physiologist Leonid L Vasiliev (1891-1966).

It may seem surprising that a regime in which materialism was the only permitted doctrine allowed the university’s Institute of Brain Research to set up a Commission for the Study of Mental Suggestion, and equally surprising that one of the first subjects to be tested in it was a dog, a lively fox terrier named Pikki. He was the star performer in his owner Vladimir Durov’s circus shows, in which Durov seemed to be controlling his dogs not only by the ultrasonic whistle he used, but also by his mind. At Durov’s suggestion, Bekhterev carried out a number of experiments with Pikki (without the whistle), which left him in no doubt that the dog was indeed responding to unspoken orders, as if his consciousness had blended with that of his owner. This was not a new discovery, but recalled similar claims by Mesmer’s pupil the Marquis de Puységur, who reported his ability to ‘change the ideas completely’ of one of his patients, and British mesmerist CHTownshend, who stated in his 1844 book Facts in Mesmerism that ‘one mind originates motion in two bodies’.

A public display of ‘mind control’ was given by another of Bekhterev’s students, Konstantin Platonov, who gave an impromptu demonstration of this now forgotten technique, at a 1924 congress in Leningrad in which he was able to induce sleep at a distance and out of sight of the subject, though in full view of the audience. Vasiliev subsequently repeated this technique on a number of occasions, yet despite such adventurous experiments, Bekhterev and Vasiliev were determined to identify the presumed materialist explanation for the technique employed and were equally determined to replicate the claim by the Italian psychiatrist Fernando Cazzamalli that there was such an explanation. However, as Vasiliev had to admit, ‘the electromagnetic hypothesis of mental suggestion, while certainly corroborated by a number of facts, nonetheless encounters a number of difficulties and contraindications which have not yet been eliminated’. As his subsequent research, involving telepathic induction at a distance, made clear, they never were, and he may have come to regret having published a paper in 1926 entitled ‘Biological Foundations of Thought Transmission’.2

Official Soviet attitudes to psi research have swung from one extreme to the other, and back again. When it became evident there were no such foundations, attitudes hardened, psi being dismissed in a 1956 encyclopedia as ‘anti-social and impossible’. Yet just four years later, the Institute of Brain Research opened a department dedicated to it, receiving numerous personal accounts from members of the public. In an interview in Komsomolskaya Pravda a year before his death, Vasiliev revealed that he had received ‘hundreds or more’ accounts such as one in which a woman described a vivid hallucination of her son’s face later found to coincide with the moment of his death. ‘How’, he asked, ‘can we explain the fact that such weak currents as those of a man’s brain can give rise to directed electromagnetic capable of being transmitted tens, hundreds, even thousands of kilometers?’ This amounted to an admission that his search for a materialist explanation of telepathy had failed. However, his reputation as Russia’s leading parapsychologist remains intact.

The publication in 1970 of Sheila Ostrander and Lynn Schroeder’s Psychic Discoveries Behind the Iron Curtain aroused considerable interest for its accounts of research in the post-Vasiliev period, and to  such ‘extrasensers’ (as the Soviets preferred to call their psychics), as Nina Kulagina, who was able to demonstrate her ability to move small objects, being frequently filmed doing so, and the team of Karl Nikolayev and Yuri Kamensky, who were apparently able to repeat the experiments in long-distance telepathy reported by Vasiliev. A team of researchers from a Moscow technical institute known as the ‘Popov Group’ also seemed to be carrying on the Leningrad research, under the direction of Ippolit M Kogan, though with less or no official support.

One of the members of this group, Larissa Vilenskaya, emigrated to the USA in 1981, adopting the name Laura Faith, and published a substantial amount of material on the state of Soviet psi research past and present. This included a comprehensive Bibliography of Parapsychology containing 171 pages of references to technical and popular works on ‘psychotronics, psychoenergetics, psychobiophysics and related problems’ published in the USSR since 1920. The work was followed by five issues of Parapsychology in the USSR (1981-2) and fifteen of Psi Research (1982-6), which contained articles on all aspects of current work in the field, some previously unpublished in the Soviet Union.

Little was known at the time about continuing research following the demise of the Soviet Union and rebirth of Russia in 1991. It came as a surprise to learn in 2014 that such research had indeed continued, not at a university or other academic body, but at the heart of the Committee for State Security (KGB), and its successor organisations, and also at the highest levels of various army departments. Senior members of these have now admitted to regularly having made use of carefully selected and thoroughly trained ‘extrasensers’ (psychics) in a number of military and security contexts, even in the battle front line as in the Chechnya campaign. One incident, the foiling of an attempted hijacking of an aircraft, has been described in great detail by the KGB officers involved: they publicly acknowledged the part played by Azerbaijani star subject Tofik Dadashev in resolving the potentially life-threatening situation, for which he received an official award.

The military men also expressed views recalling those of alchemists who believed that their real purpose was not the transformation of base metals into gold, but rather of the alchemists themselves. As former Chief of the General Staff General Mikhail Kolesnikov put it, ‘the world will not be won by weapons, but by a qualitatively new human being who would be close to God, a human with cosmic consciousness’. His colleague Lt. Gen. Alexei Savin was equally forthright when he described his unconventional training methods with recruits ‘who had lived poor, boring and often semi-criminal lives in small provincial towns, and as a result were full of cynicism.

To arouse their curiosity and engage their interest, I chose psychologically appropriate tactics, brought in flamboyant students and displayed their psi powers, and I told stories about unusual research. I did manage to attune these suspicious students to the right wavelength. I attuned their brains, so to speak, to the stream of energy coming from the Earth’s data field.

Results were remarkable. 'Something had happened to their brains’, Savin stated. Some even found themselves diagnosing and healing people. The cadets became ‘missionaries of enlightened ideas, which they then carried to the masses… This was my super-mission, and I had fulfilled it.’

It may not have been quite the mission Lenin had in mind to create a ‘new  man’, or by the followers of Le Bon’s aspirations for control of the masses. Yet there are signs that a thorough education of the kind pioneered by Savin could bring about the personal transformation to which the alchemists aspired.3

It remains to be seen whether Edgar Cayce’s 1944 prophecy will finally come true, that

each man will live for his fellow man. The principle has been born. It will take years for it to be crystallised, but out of Russia comes again the hope of the world.