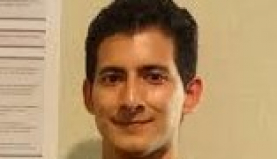 Ramses D’Leon Macias, a graduate student at Mexico’s Universidad UTEL, has carried out psi research in presentiment and psychokinesis.

Ramses D’Leon Macias is a graduate student at Mexico’s Universidad UTEL working toward a masters degree in data science. He is studying physiological anticipation and psychokinesis. He is chief researcher at Unidad Parapsicológica de Investigación, Difusión y Enseñanza, now part of the Centro de Investigación de la Sintergia y la Consciencia, which aims to become a major psi research centre in Mexico, and of which he is co-founder. He was program chair of the Parapsychological Association's 2019 international convention in Paris.

D’Leon is developing low-cost presentiment testing materials for use by researchers who would otherwise struggle to fund such activity. Despite accumulating evidence in support of presentiment effects in human physiology – termed predictive anticipatory activity (PAA) – there is still significant resistance from mainstream scientists to even consider this evidence. D’Leon conjectures that this largely relates to obstacles in the way of replicating the effects: expensive equipment, expertise and protracted statistical analyses. His goal is to develop PAA software with a high-quality design that is compatible with low-cost psychophysiological equipment, allowing testing of a wide range of stimuli.

When D’Leon analyzed the results he found evident differences prior to the shown stimuli, both in skin conductance level and in heart rate variability, indicating a presentiment effect.

D’Leon further explains that ‘arousal and valence, as the orienting and defence response, seem to play fundamental roles on physiological activity in the anticipation of any event, as it also happens in normal physiology studies when the stimuli are presented.’ He concludes that independent replication of previous research has been successful and paves the way for the use of inexpensive psychophysiological materials in further presentiment research, expediting dissemination to other interested research groups.1