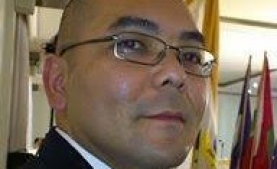 Reginaldo Hiraoka is a Brazilian philosopher and psychologist with research interests in parapsychology, in particular ganzfeld ESP and collective influence on random number generators.

Reginaldo Hiraoka obtained a degree in philosophy from Pontifical Catholic University of Parana, Brazil, in 2011, followed by a postgraduate degree in cultural anthropology from the same university in 2013. He is currently professor of philosophy in education at the State of Paraná's department of education. Additionally, he teaches post-graduate students in transpersonal psychology, parapsychology (with an emphasis on consciousness studies) and quantum physics at the Faculdades Integradas Espírita (FIES).

Hiraoka’s research interests include understanding the ganzfeld process and exploring group field-like effects using random number generators. His work has been extensively profiled in Brazilian media, including TV Globo (2013) and the Discovery Channel (2005). He is a regular commentator on parapsychology at Rádio Transamérica.

At the 2003 international convention of the Parapsychological Association, Hiraoka and colleagues described a ESP study in which some participants were given ganzfeld stimulation and others were not, in order to compare the effectiveness of this in creating psi-conducive conditions (in the ganzfeld condition, subjects were given the standard 20-minute relaxation procedure, eyes covered with halved ping-pong balls, upon which two red lights were projected, while listening to ‘white noise’). Seventy-four subjects contributed 54 trials of each condition.  The ‘receiver’ (the person who receives telepathic information from the ‘sender’) was invited to watch four video clips and tried to identify which video was the target.

Overall, scoring across 108 trials was not significant (25.93% where 25% is expected by chance), but a clear difference between conditions emerged, with ganzfeld subjects scoring above chance (33.33%, p = 0.1) and non-ganzfeld subjects scoring below chance (18.52%). The difference between conditions was statistically significant (p = 0.023). Neither the characteristics of the participants (creativity, extraversion and artistic involvement), nor alterations in consciousness (level of relaxation, mental activity, perception of time passing and awareness of the body) were correlated with psi-scoring.1

At the 2005 annual convention of the Parapsychological Association, Hiraoka and colleagues presented a research brief (proposal for future research) that describes combining two established techniques to create a new type of ganzfeld experiment. In their previous research, two weak areas requiring improvement were identified: a lack of good quality analysis of mentation reports given by receivers and a lack of objective data about individuals in the ‘sending’ condition.

Hiraoka and colleagues refer to the real time digital ganzfeld system developed by Adrian Parker and Joakim Westerlund at the University of Gothenburg,3 in which real-time mentation is time-stamped to video targets, allowing more objective correspondences to be made. Hiraoka proposed repurposing previous remote influencing protocols that measured electrodermal activity and probe for physiological correlations between senders and receivers during real-time ganzfeld sessions. Unfortunately, logistical issues prevented this research from reaching fruition,4 and a combined approach of this type appears not to have been continued elsewhere.

The influence of collective intention on the behaviour of random number generators (RNGs) has been extensively studied.5  In these investigations, groups of people who are engaged in activities such as meditation appear to cause non-random changes in the output of RNGs. Hiraoka and colleagues studied this effect during religious rituals and other events in Paraná, Brazil, which involved the Guarani people, members of the Santo Daime religion, yoga classes, and a concert.

They found four significant deviations of around 5% level in eighteen experiments, where only one would be expected by chance. However, they also found two significant deviations in eight controls, which resulted in a non-significant difference overall.6 No relationship was observed between the number of attendees and RNG deviations, contrary to results obtained elsewhere.7

In a 2005 report, Hiraoka and co-authors describe attempts to train Brazilian children in a Chinese psi inductive technique, in which the aim is to identify images which have been drawn on paper fragments and placed into the subject’s ear.8

Colleagues of Hiraoka visited Yunnan Province in China in 1997, where they witnessed a screening test of 51 pupils at a local school. Thirteen children were selected and were told to concentrate on the concealed targets, drawing any images that entered consciousness. The children demonstrated some evidence of ESP ability by drawing designs (simple line drawings and letters of the alphabet) very similar to the targets. One child consistently demonstrated evidence of psi.

In Brazil, eleven children aged 10-14 in the same technique failed to demonstrate clairvoyance, possibly because of their relatively small number and the limited nature of the training they were given as compared with the Chinese experiments. Nevertheless, they concluded that this method can potentially be used with non-Chinese subjects.9