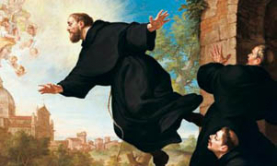 Throughout history, in diverse religious traditions, there have been reports of individuals being seen spontaneously levitating, their bodies rising into the air and remaining suspended. The phenomenon is especially associated with Catholic saints, notably St Teresa of Avila and St Joseph of Cupertino.

In shamanic culture, levitation is thought to be involved in the ‘journey to the spirit world’.1 The ‘first shaman’ was said to have been closest to the gods and therefore shared much of their power, including the power to levitate.2 Shamanistic traditions agree that levitation and other ‘paranormal’ powers, as they are labeled today, are caused by spirits.3 Among the Tungus people a shaman is chained to the ground in order to prevent levitation occurring.4 Father Paul Lejune referred to levitation occurring among Native Americans in Canada in the 1630s, and Australian aborigines have been reported practising levitation, as have some African tribes,5 on other people as well as themselves:a Zulu witchdoctor was witnessed levitating a man ‘three feet off the ground’.6

In his studies of Haiti, Douchan Gersi describes having witnessed instances of levitation that he could not explain. As with other cases of religious levitation, these events occurred during a period of meditation and/or trance. Gersi saw a woman jumping in the air and ‘floating twelve feet in front of him’.  However, when he tried to photograph levitations, his camera batteries consistently went dead. Even if he managed to take a photo with high-speed film, it came out ‘totally black, or blurred and out of focus’.7

Levitation has long been noted among Brahmans in India. In the earliest canonical work of Hinduism, the Rig Veda, there is a reference to sages who ‘ride with the rush of the wind’ and ‘sail through the air, seeing appearances spread out below’.8 Flavius Philostratus, in his life of Apollonius of Tyana, claims that Apollonius visited India, where he visited Brahmans at a temple: they first ‘bathed and anointed themselves with a certain drug’ and ‘with their rods uplifted struck the earth, which heaving like the sea waved raised them in the air two cubits high.’9 He also mentions that the Brahmans did not boast about their powers, a fact confirmed by later visitors. In the Yogic tradition in Hinduism,10 unusual abilities are said to manifest themselves. Although practitioners are discouraged from viewing these abilities as a source of pride, they can serve to indicate progress toward enlightenment. These powers include levitation as well as psychic abilities such as telepathy and precognition. As is the case in other religions, levitation usually occurs after a period of deep meditation.

There have been witness reports of some Buddhists levitating.11 However, as in Hinduism, Buddhist levitators discouraged from doing so in public and are instructed to remain humble about their ability. Levitation is traditionally held to be a power of the lamas of Tibetan Buddhism, although there are no documented contemporary examples.12 Stories about the Tibetan yogi Milarepa (1052-1135) include references to his ability ‘to fly over vast distances’.13

Levitation is found among the paranormal practices of Taoist philosophic schools such as Huang-Lao.14 15  It has been reported among masters of the martial art of Qigong, the product of both Buddhist and Taoist influence. Paranormal abilities arise from the qi (also known as ki or chi), an energy force permeating nature. Such abilities arise spontaneously through the practice of meditation, although main goal of such is not paranormal abilities or even greater effectiveness in combat, but union with all of nature. Martial arts practice in the East amounts to a religion, and meditation in martial arts is regarded by some as ‘mysticism’.

Documented cases of levitation in Christianity are mainly found in the Roman Catholic tradition. One commentator, Fr Herbert Thurston, found the evidence in the cases of St. Francis of Assisi, St. Dominick and St. Ignatius of Loyola to be weak.16 Thurston was more persuaded by the case of St. Teresa of Avila, who refers often in her autobiography to her body spontaneously levitating, although she disliked this, considering such physical manifestations to be a source of pride. Several witnesses also claimed to have seen Teresa levitating. Others religious figures who were said often to levitate include the seventeenth century nun Suor Maria Villani and St. Philip Neri.

The best-documented case of multiple levitations by a Roman Catholic saint is that of St Joseph of Cupertino. As a young man he decided to practice extreme asceticism, developing such habits as pouring a bad-tasting powder on his food, wearing a hair shirt, and allowing metal pieces to dig into his skin, along with constant flagellation.17 He was seen by numerous witnesses flying into the air when meditating: some flights were said to be six or seven feet over the ground. On one occasion the High Admiral of Castile and his wife said they saw Joseph fly thirty or forty feet above their heads;18 on another, he was said to fly high above a church altar.19

This activity led to charges against him, his accusers in the church hierarchy believing it to be demonic. However, Pope Benedict XI, a critical-minded thinker experienced at debunking fakers, was impressed by the number and quality of witnesses and concluded that Joseph had indeed levitated on a number of occasions. Leibniz’s patron, the Duke of Brunswick, said he saw Joseph levitate twice and was so overcome by the sight that he converted from Lutheranism to Roman Catholicism.20  Several levitations were witnessed during Joseph’s final years, notably one during the last mass he celebrated before his death, an event observed by several people. Joseph was also seen to levitate objects, including a large cross.21

Other apparently well-attested cases of levitation in the Catholic tradition are those of St Bernardino Realino (1515-1616) and the nineteenth century Syrian nun Mariam Baouard.

The best known Protestant case of levitation is that of Margaret Rule in 1693 in Boston.22  Rule claimed to be seeking salvation after living a sinful life. She experienced convulsions, and appeared also to be the victim of poltergeist-like activity, receiving bruises seemingly made by invisible hands that pinched her. On one occasion five witnesses claimed to have seen Rule ‘lifted up from her bed, wholly by an Invisible force, a great way toward the top of the Room where she lay’.23

Levitation is widely mentioned in Islamic literature, where it is referred to as ‘flight’. Among those said to have flown are the Prophet Muhammed; the twelfth century Persian dervish, Haydar; followers of the Sufi ‘Ahmade-e-Khazruya; and the ninth century Muslim saint Abu Yazid al-Bestami.

Modern Spiritualism, itself part of the Christian tradition, offers the case of the medium DD Home (1833-1886), who attributed his psychokinetic powers to God.24 Home was seen to levitate objects - including pianos and tables with people sitting on them25 - in good light, and often by multiple witnesses in surroundings with which he was unfamiliar. He was also said once to have floated out of an upper storey window at night and back in at another,26 dramatic testimony which however was vulnerable to criticism and weakly supported.

Levitation is often associated with demonic possession, such as the case study of ‘Paul’ described by Malachi Martin.27 In a well-known 2012 case, Latoya Ammons of Gary, Indiana claimed that her children were demon-possessed and that they levitated.28 Stafford Betty notes the widespread cultural acceptance of an association between levitation and demon possession.29 Advocates of a correlation do not necessarily claim that levitation implies demonic possession in all cases. Rather, demon possession is evidenced by a combination of factors that cannot be explained by poltergeist phenomena.30

Skeptics believe that even the best cases of levitation are vulnerable to one or more of the following criticisms:

The Humean critique  This draws on David Hume’s argument against miracles in his Dialogues Concerning Natural Religion. Hume argues that a miracle is a violation of a law of nature, and therefore less probable than fraud or some other non-paranormal explanation. A response might be that Hume sets the epistemological bar too high: if evidence were sufficiently strong one might have to admit to an exception to the law of gravity. An alternative suggested by Pamela Heath is that levitation may be due to alternations in time, a phenomenon known to affect gravitational pull.31

Too few witnesses  This argument holds that claims of levitation cannot be accepted because they are only ever witnessed by isolated individuals. (This was often untrue in the case of St Joseph of Cupertino, however.)32

Biased witnesses  Believing in miracles, Roman Catholics believed in the possibility of levitation and may have convinced themselves that St Joseph of Cupertino and other saints levitated when actually this did not occur. Critics of this approach could argue that everyone holds prior assumptions about reality, and that this causes bias to some degree. It is also pointed out that that Pope Benedict XIV, a well-known skeptic of most ‘miraculous’ phenomena, was convinced by claims regarding St Joseph of Cupertino.33

Time Lapse  Documents written long after the alleged levitation occurred may be said to be unreliable. Critics counter that in well-attested cases such documents were written within two or three years of the levitator’s death, while witness statements were often signed shortly after the event.34

Inaccessible Evidence   An impediment to verification is the inaccessibility of Vatican documents that were used to evaluate an individual’s candidacy for sainthood.  Critics argue that it is unreasonable to doubt the honesty of the clergy who made these judgments: some of them were skeptics of such miraculous claims, and the case for sainthood is often contested by a ‘devil’s advocate’.

Differing witness accounts  Inconsistencies in witness testimony mean that reports of levitation are unreliable. Critics counter that strict adherence to this principle would abrogate the validity of all human testimony.

Mass hypnosis  This suggests that the crowds of witnesses in cases such as that of St Joseph of Cupertino were in a hypnotic trance. Critics reject this as an ad hoc argument, also casting doubt on the evidence for mass hypnosis.

Replicable by trickery  If a magician can fake levitation, so too can others - rendering reports of paranormal levitation unreliable.35 Critics point out that the two are not mutually exclusive: the fact that levitation can be performed as a trick does not mean that paranormal levitation might not occur. Also, some past claims of levitation would have been far beyond what was possible to achieve with the technology then available.36

Those who accept the existence of God and an angelic realm (including a demonic realm) may naturally consider supernatural explanations favorably. A parapsychologist, by contrast, is likely to view levitation is a type of psychokinesis, a natural human ability (however inexplicable in terms of current scientific knowledge) requiring no need of explanations in terms of supernatural entities. Supporters of the latter view may appeal to Occam’s Razor, broadly that the most economical explanation is to be preferred. They would also argue that science must be methodologically neutral with regard to competing world views, dealing with the data as it comes.

Some Christian writers concur with parapsychologists in considering psychokinesis, including levitation, to be a natural human ability.37 38  Others such as Richard Ravelli argue that the preference on the part of parapsychologists for naturalistic explanations is more an effect of bias than a careful consideration of the evidence and that claimed ‘neutrality’ is never truly neutral, but rather biased toward philosophical naturalism. 39