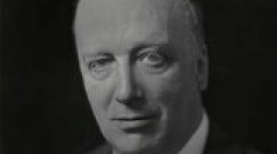 Robert Strutt (Lord Rayleigh) (1875-1947), a fellow of the Royal Society and professor of physics at Imperial College, London, designed a method of using infrared photography in the investigation of physical mediumship.

Robert John Strutt was born on 28 August 1875 in Terling Place, the family estate in Essex. He was the eldest son of John William Strutt, 3rd Baron Rayleigh and a nephew of the Tory politician Arthur Balfour and his sister Eleanor Sidgwick. He attended Eton College, then studied mathematics and natural sciences at Trinity College, Cambridge.

Strutt became a research student in physics at the Cavendish Laboratory at Cambridge, working on the discharge of electricity through gases and taking part in the early exploration of x-rays and electrons. He discovered ‘active nitrogen’ and undertook detailed work on the ozone layer, as well as studying radioactivity.

He was appointed a fellow of Trinity College and the Royal Society Cambridge and was president of the British Association for the year 1937-1938. He resigned his chair at Imperial College in 1919when the death of his father led to his inheritance of his title, but continued to experiment in the private laboratory that his father had established

Strutt was keenly interested in psychical research. He contributed to the administration of the Society for Psychical Research, which he joined in 1925, serving as its president from 1937 to 1938.  When war broke out in 1939 he made his country house available for storing the Society’s archives.1

Strutt pioneered the use of infrared photography as a means to record the presence of an invisible psychic substance in the investigation of physical mediumship. This was used by Lord Charles Hope and CVC Herbert in the investigation of Rudi Schneider. The results proved to be ambiguous: some absorption of the radiation was observed, but nothing definite was captured on the plates.2  However, the method helped rule out cheating on the part of the medium (see Rudi Schneider Investigated by Eugene Osty).

A method of silhouette photography by infra-red rays for use in mediumistic investigation (1932). Proceedings of the Society for Psychical Research 41, 89-98.

Presidential address: The problem of physical phenomena in connection with psychical research (1938). Proceedings of the Society for Psychical Research 45, 1-18.

The question of lights supposed to have been observed near the poles of a magnet (1938-39). Proceedings of the Society for Psychical Research 45, 19-24.

Rayleigh, Lord (1932). A method of silhouette photography by infra-red rays for use in mediumistic investigation. Proceedings of the Society for Psychical Research 41, 89-98.