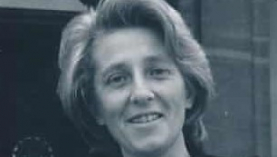 Rosemary Dinnage (1928-2015), a journalist and author, was named by The Observer in 2011 as one of Britain's top 300 intellectuals. Dinnage had an active in interest in parapsychology and was a long-standing member of the Council of the Society for Psychical Research.

Rosemary Dinnage (née Allen), born on 17 January 1928, was raised in Rhodes House, Oxford, where her father, Sir Carleton Kemp Allen was Warden. She spent the early World War II years in Canada, returning in 1943 to take up a scholarship in English literature at Somerville College, Oxford.

In the 1950s Dinnage worked as a typist for Unesco in Paris and the UN’s Food and Agriculture Organisation in Rome. She also worked as a French translator and later took an external degree in psychology at Birkbeck College, before working as a research officer at the National Children’s Bureau.

In the 1970s and 1980s Dinnage wrote numerous reviews and essays for the Times Literary Supplement, the New Statesman and the New York Review of Books. She authored books on subjects as diverse as Annie Besant, Alice James (sister of Henry and William James) and her experiences in psychotherapy.

Dinnage became aware of the Society for Psychical Research in the 1960s while researching an article on nineteenth century psychology.1 Her interest deepened after she interviewed Rosalind Heywood, a senior member who reported regular personal experiences of telepathy.

She later became a Council member and was involved with the expansion of the SPR library. She reported and published the many lectures and talks that were given at the SPR in its quarterly magazine Psi Researcher (later Paranormal Review), and contributed occasional articles and reviews.

One to One: Experiences of Psychotherapy (1988). London: Penguin Books Ltd.

The Ruffian on the Stair: Reflections on Death (1990). London: Penguin Books Ltd.