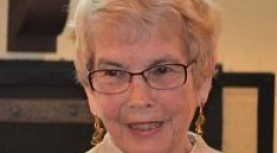 Sally Rhine Feather PhD is a retired American clinical psychologist, who carried out psi experiments at the Rhine Research Center in the 1960s. She is daughter of Joseph Banks Rhine and Louisa Rhine, and co-authored The Gift (2005) a description of paranormal experiences collected by her mother.

Sally Rhine Feather PhD, is the eldest daughter of Joseph Banks Rhine and Louisa E Rhine, who are considered to be the founders of modern parapsychology.  Feather served as a child subject at the Duke Parapsychology Laboratory founded by her father, and later worked there as a research assistant, both before and after attending college, and after obtaining a doctorate in experimental psychology from Duke University (1967).  Her research topics included psi abilities of animals, correlation of memory and ESP performance, and help-hinder effects in a PK task.

Following another lifelong interest, Feather obtained further training in clinical psychology at University of North Carolina in 1969 and devoted the next several decades to clinical psychology in mental health centers and private practice until retirement in 2004.   A move back to North Carolina in the early 1990’s enabled her to get re-involved in the Rhine Research Center.  Since 1994 she has served in various administrative capacities including the board of directors and for several years as volunteer executive director.  She co-authored a popular book on ESP experiences (St. Martins, 2005) and received the 2010 Career Achievement Award from the Parapsychology Association.

Now in retirement, Feather is co-editing a book on selected letters of her father’s early years.

The possibility that the experimenter may play some role in positive psi scoring by participants in ESP tests is a major topic of investigation in parapsychology. Certain precognition tests carried out in the 1960s further indicated a possible distinction in this regard between the main experimenter and an assistant who checked the scores at the end of the session. In two experiments conducted by Feather and Brier, significant scoring by participants was seen when they anticipated the results would be checked by the main experimenter only.  When Feather, acting as the main experimenter, performed the checking, the results were significant regardless of subject expectancies, while those checked by Brier, acting as the assistant, were all at chance. So the conclusions were as predicted, favoring the main experimenter, also that the role of the checker was important, whether the subject knew this or not.1

In 1969, Feather and her mother Louisa Rhine carried out a dice PK experiment using themselves as subjects, to determine whether two people attempting to influence the fall of dice in a particular direction would work better than one alone, also whether by aiming at different outcomes their efforts might cancel each other out. A second experiment used the same procedure but was carried out on days when one of the subjects reported being in an unpleasant mood. A negative mood was associated with reduced PK scoring in the competition condition but not in the cooperation condition. One subject being in a negative mood, even when the other was unaware of it, appeared to reduce both subjects’ PK ability.2

During the 1960s and 1970s there was significant interest in the relationship between memory and ESP functioning. Feather arranged for experimental participants to undergo both ESP testing and assessment of memory function and found a significant relationship between them,3 in alignment with research done at the time and since. The deeper implications are discussed by James Carpenter as part of his First Sight theory.4

In a 1986 article, Feather discusses the life and career of her mother Dr  Louisa E Rhine. After earning BS, MS, and PhD degrees in botany while at the University of Chicago, Rhine moved to Durham with her husband Joseph to study psychic phenomena at Duke University. Louisa Rhine was actively involved at the Duke Parapsychology Laboratory and carried out experiments of her own. However, her main focus was spontaneous cases. She collected over 30,000 letters from the general public describing a wide-range of phenomena, from apparitions to premonitions, telepathy and other psychic phenomena. As she described it, her aim was ‘not to prove the existence of psi but to see whether these cases would throw any light on the psi process and provide ideas that might form the basis for research under controlled conditions.’

This work was detailed in several books over three decades and numerous academic articles. The experiences were categorized under the following headings: hallucinations, unrealistic dreams, and realistic dreams. The total of 30,000 cases, of which more than half were categorized and analyzed, remains the most extensive collection in existence.5

Feather has often spoken and written about the life and work of her father Joseph Banks Rhine, who is considered to be the founder of modern parapsychology. Rhine, who trained initially as a botanist, then as a psychologist, was the first to systematically apply experimental investigations in the field of psychical research. This work began in 1930 and led to the opening of the world’s first parapsychology laboratory at Duke University in 1935. The research followed simple forced-choice testing practices for testing telepathy, clairvoyance and precognition employing Zener cards as targets. Over many decades, Rhine provided high quality evidence of psychic functioning under increasingly stringent conditions.

In the 1940s Rhine, after discussing potential psychokinesis influences with a gambler, developed a PK program using dice as targets, with testing carried out over several years. Absolute effect sizes were very small, but they survived increasingly sophisticated control measures such as using automatic tumbling machines and photographic recording of faces.

When Rhine retired from Duke in 1965, he moved the lab off campus where it became an independent international research center, which since 1995 has been known as the Rhine Research Center.6

In The Gift: The Extraordinary Experiences of Ordinary People (co-authored with Michael Schmicker), Feather describes many of the spontaneous cases investigated by her mother, along with other accounts held at the Rhine Research Centre. These testimonies, provided by people of all walks of life, are categorized by Rhine’s own system: intuitions, hallucinations, unrealistic dreams, and realistic dreams. The book also describes laboratory-based studies that since the 1930s have provided empirical backing for these anecdotes.7

Feather, S.R. (1992). J.B. Rhine from a daughter’s perspective,” in Pioneers in Psychology, Volume 3, published by the American Psychological Association from an Invited Address given at the APA Convention, Washington, D.C., August 1992. 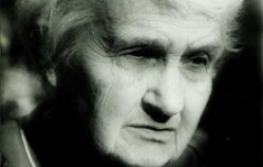 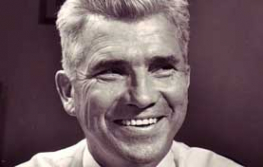 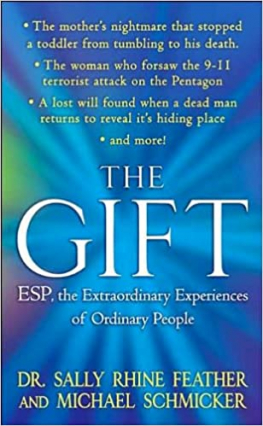