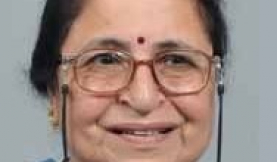 Satwant K Pasricha is an Indian clinical psychologist known for her research on childhood past life memories and near-death experiences.

Satwant Pasricha earned her MPhil and PhD in clinical psychology at the National Institute of Mental Health & Neurosciences (NIMHANS) in Bangalore, India.1 She joined the faculty in 1980 as a lecturer in clinical psychology, being promoted to professor and eventually to head of the department.

Following her retirement from the Centre in 2010, she worked at the Himalayan Institute of Medical Sciences in Dehradun, Uttarakhand, India.2 Currently she is a senior honourary clinical psychology consultant at the Psychological and Counseling Services Clinic in Dehradun.3

Pasricha has published widely on psychological and parapsychological topics, presented at conferences and served on local and national academic committees. She has received several awards in India and was recognized as a pioneer in mental health by the Delhi Psychiatric Society. She has long been affiliated to the University of Virginia’s Division of Perceptual Studies, formerly directed by Ian Stevenson, and is international affiliate of the Parapsychology Foundation for India.4

Pasricha describes her motivations for carrying out reincarnation research as follows:

I was not satisfied with the conventional explanations of certain paranormal or unusual behavior; so I wanted to learn more about these phenomena.6

I undertook the present investigation with the hope that it would contribute to the existing knowledge of human behavior, both normal and paranormal.7

Pasricha met Stevenson in 1973 at a time when, due to her scientific background, she was sceptical about reincarnation cases, which she had read about only in newspapers.8 Her curiosity aroused, she agreed to visit and interview informants for two cases, acting as interpreter. Impressed by Stevenson’s approach, she accepted his invitation to study cases independently and, despite the obstacles involved in reaching remote villages, found herself drawn to the work, especially due to the strong case of Manju Sharma.9

Pasricha decided to give up her job to help Stevenson investigate cases and enrolled in NIMHANS’ PhD programme, basing her thesis on her own investigations of cases of spontaneous past life memories among young children. The 1978 thesis was expanded to include more recent work and published in 1990, then republished in 2019.10 It includes sample cases with thorough analyses, comparisons that show striking similarity between features in her cases and those reported by Stevenson, and a survey of laypeople showing closer resemblance in their reincarnation beliefs to the patterns discovered by Stevenson if they had been witness to a reincarnation case.

Pasricha mostly did not need interpreters in northern India as she is a native Hindi and Punjabi speaker.12 Stevenson noted her interviewing skill and the willingness of shy Indian mothers to give her information they would be reluctant to reveal to him.13

Pasricha continued fieldwork, combining follow-ups on the cases used for her thesis and newly-found ones. Lines of inquiry she pursued include:

Pasricha concurs with Stevenson that spontaneous cases, rather than cases obtained by use of drugs, hypnosis or psychic past-life readings, provide the most reliable past-life memories and, thus, evidence for reincarnation.23 Like Stevenson, she prefers children as subjects, in part because it minimizes ‘contamination of their experiences by all the information to which adults are exposed’; also, she writes, children are the best subjects for psychological or psychiatric studies ‘because an understanding of the child gives insight into the main characteristics of the adult and helps to clarify the foibles and idiosyncrasies of a person’s later years’.24

Echoing Stevenson’s paper on the explanatory value of reincarnation,25 Pasricha notes that past lives can explain otherwise inexplicable mental symptoms in children such as ‘unusual and irrational fears, childhood animosities and vengefulness, and gender dysphoria’. She writes:

If we fail to trace the cause of a person’s deviant behavior to his genes or to his immediate environment, we may justifiably conjecture that it derives from events even earlier than those of childhood or infancy, namely those of a previous life.26

Pasricha has undertaken research on near-death experiences, including collaborative work with Stevenson. In a 1986 paper, Pasricha and Stevenson compared the NDEs of sixteen investigated cases in India with a larger sample of American NDE cases. Similarities were found, including the appearances of deceased relatives, but also notable differences: for instance, Americans tended to see their corpses from a distance, Indians more closely. The envisioned reasons for returning to life differed: Americans tended to be called back due to the love of the people being left behind, or were told it was not yet their time to die, while Indians tended to learn that their brush with death was due to a bureaucratic error on the part of an underling of the death-God Yama writing down the wrong name.27 Pasricha’s NDE-related papers were republished in her second book.28

Pasricha, S.K. (2011a). Do attitudes of families concerned influence features of children who claim to remember previous lives? Indian Journal of Psychiatry 53/1, 21-24.

Pasricha, S.K. (2011b). Relevance of parapsychology in psychiatric practice. Indian Journal of Psychiatry 53/1, 4-8.

Pasricha, S. (1998). Cases of the reincarnation type in northern India with birthmarks and birth defects. Journal of Scientific Exploration 12/2, 259-93.

Cook, E.W., Pasricha, S., Samararatne, G., Maung, W., & Stevenson, I. (1983a). A review and analysis of “unsolved” cases of the reincarnation type. I: Introduction and illustrative case reports. Journal of the American Society for Psychical Research 77, 45-62.

Cook, E.W., Pasricha, S., Samararatne, G., Maung, W., & Stevenson, I. (1983b). A review and analysis of “unsolved” cases of the reincarnation type. II: Comparison of features of solved and unsolved cases. Journal of the American Society for Psychical Research 77, 115-35.

Pasricha, S.[K.], & Stevenson, I. (1979). A partly independent replication of investigations of cases suggestive of reincarnation. European Journal of Parapsychology 3, 51-69.

Stevenson, I., & Pasricha, S.[K.] (1980). A preliminary report of an unusual case of the reincarnation type with xenoglossy. Journal of the American Society for Psychical Research 74, 331-48.

Stevenson, I., Pasricha, S., and McClean-Rice, N. (1989). A case of the possession type in India with evidence of paranormal knowledge. Journal of Scientific Exploration 3/1, 81-101.

Stevenson, I., Pasricha, S.[K.], & Samararatne, G. (1988). Deception and self-deception in cases of the reincarnation type: Seven illustrative cases in Asia. Journal of the American Society for Psychical Research 82, 1-31.