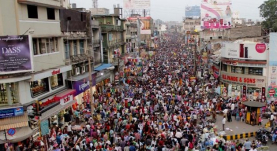 As a child, Sunita Chandak remembered many details of a past life in a village named Belgaon. A family that closely matched her memories was found in a village of that name, after details were published in a newspaper article.

Sunita Chandak was born around 1974 in the Indian town of Nagpur. According to her parents, she began speaking about a past life at the age of four, saying she was from a village named Belgaon and begging to be taken there. Her parents had not heard of a village with that name. However, Sunita insisted that her mother cook her meals in a style of cuisine that was typical of a particular region.  She also described Belgaon as having a temple but no school, and being near a river and hills.

Her father asked Padmakar Joshi, an Indian journalist, for help.1 Joshi informed him that there were 28 villages named Belgaon; nine matched Sunita’s description, and her parents began driving her to each one. By the time she had rejected the first three, Joshi had published a story quoting some of her past-life memories, including the facts that she had never worn a sari (meaning she had died as a young girl, not yet old enough by Indian custom to wear one) and had a sister named ‘Sumitri’. A reader from one of the other villages named Belgaon, about ninety miles distant from Nagpur, wrote saying that he knew a couple named Kalmegh with a daughter named Sumitra, whose older sister Shanta had been born in 1945 and died in 1950. Sunita was taken there and announced, ‘This is it.’ According to witnesses, she made many identifications of relatives and associates of the Kalmeghs. She reportedly recognized their house, took Shanta’s mother’s hand and said, ‘This is my mother.’

Ian Stevenson, who investigated the case, attached little significance to these recognitions, because the tests were not done systematically, potentially enabling Sunita to be prompted by signs from the crowd that gathered to watch. More significant was Sunita’s recognition of changes that the village had undergone since Shanta’s death, which were confirmed by the Kalmegh family.

Shanta’s family became entirely convinced that Sunita was her reincarnation, and she began a permanent relationship with them.

Sunita became something of a local celebrity in Belgaon. At one point she indicated a vacant area near the school and asked if a temple would be built there. No plans had been made for one, but the villagers interpreted her question as a sign and the temple was built.

The journalist Padmakar Joshi enabled the past-life family to be found by finding a contact through his publications. Stevenson investigated a few years later, interviewing additional first-hand witnesses, and then followed up during a second trip when Sunita was 24, this time accompanied by journalist and author Tom Shroder.

Steven was interested in reincarnation cases involving twins, considering that disparate personality types in monozygotic (identical) twins raised together might point to past-life carryovers as the cause, genetic and environmental influences having been effectively ruled out. Sunita had a twin sister who, unlike many other twin siblings of children with past-life memories, had no such memories. Shroder quotes their father as saying: ‘I always said to Anita, “Your sister told me where she lived. Why don’t you tell me where you lived?” but she never said anything.’

Sunita Chandak’s case was never published by Stevenson: the sole English-language publication of it was authored by Shroder in his popularization of Stevenson’s work.2 However, it has special significance as a case for which a written record of the memories was made prior to the previous incarnation being identified.

Shroder noticed that Sunita referred to her father as her ‘Verni Kotha father’, and to Shanta’s father as her ‘Belgaon’ father. When Sunita’s father jocularly but pointedly said, ‘I think she is more attached to her Belgaon family than to us,’ Sunita responded:

I still see them on special occasions, but I don’t see them any more than my Verni Kotha parents. Maybe when I was living with them they noticed that I missed my Belgaon parents. If you have two children and one of them’s in boarding school and the other one’s home, you tend to think of the one in boarding school more because you miss him and he’s away, but you see the other one all the time. Now that I’ve moved out and I’m living in my husband’s home, I miss both my Verni Kotha and Belgaon parents equally.

Asked if she still had any visual memories of her previous life, Sunita answered:

Some things I remember. I remember playing with my younger sister, for instance, but I think much less about it now. It’s like when you want to take a test and you study hard, and then go pass the test and forget about it. I wanted to find my village and see my family and when I got most of the things I wanted, I didn’t think about it so much.

Later Development and Second Past Life

At the time of Stevenson’s follow-up visit, Sunita, now aged 24, was living in relative affluence as the wife of a homeopathic doctor. Stevenson tried to arrange for blood-tests for both Sunita and Anita, to find out whether they were monozygotic or dizygotic (fraternal) twins, but the family refused. Sunita was now more interested in pursuing past-life regression, to find out more about past life memories she had remembered around age seven or eight, apparently relating to a separate past life. In this life she was an only child, living in a house made of cement with a peepal tree in the yard and in view of railway tracks. She further remembered that her parents owned a cloth shop and the local clay was red rather than yellow as it was in her hometown Nagpur. But, to her frustration, she could remember no one’s names. (Shroder does not reveal whether regression was successful.)