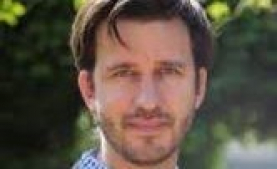 Thomas Rabeyron is a French clinical psychologist, whose psi research has covered precognition and presentiment effects and the clinical aspects of anomalous experiences.

Thomas Rabeyron is professor of clinical psychology and psychopathology at the University of Lorraine in Nancy. He is director of the INTERPSY laboratory, which encourages collaboration between clinical psychology and medicine, with the aim of improving mental health care delivery. Since 2014, in addition to his French academic appointments, he has been an honorary research fellow at the University of Edinburgh, completing part of his PhD under the supervision of Caroline Watt.

Rabeyron’s research interests span understanding the clinical aspects of anomalous experiences and exploring precognition and presentiment effects. In 2009 he co-created the Centre for Information, Research and Counselling about Exceptional Experiences (CIRCEE), whose counseling service he supervises. He has also contributed to reviews of several bodies of psi data.

With Renaud Evrard and David Acunzo, Rabeyron reviewed the neuroimaging psi data. The authors considered six functional neuroimaging studies of distant intentionality/telepathy, where a remotely located individual attempts to send information to, or simply focus on, a receiver. They also reviewed a brain imaging precognition study. They found the overall evidential base to be quite high, with only one negative study, but conclude that general methodological quality is low. They  make several suggestions for improving experimental rigor, including the introduction of counter-balancing of trials, proper randomization techniques, adequate shielding between receiver and outside environment, and recruiting enough subjects to achieve sufficient power.1

To discover hitherto unknown aspects of the out-of-body experience that might have implications for understanding the psyche, Rabeyron and Caussié interviewed sixteen people who experienced OBEs. Their responses indicated that out-of-body experiences usually occur during altered states of consciousness or during traumatic events. Rabeyron and Caussié found that during the out of body experience the sense of self disintegrated, following a common phenomenological pathway that led to a sensory integration constituting the out-of-body state. To shed light on the nature of the experience, Rabeyron and Caussié focus on the relationship between trauma and OBEs, proposing that these experiences function to insulate the subjective element from psychological distress. They discuss the role of symbolism during the OBE state, in particular in the experience of seeing one’s double and the after-effects engendered by this profound shift in consciousness. They conclude that clinicians can help cultivate this symbolization process as a means to promote positive after-effects and improved mental health.2

Daryl Bem’s 2011 report5 of experiments seeming to give evidence of implicit precognition caused controversy and encouraged replications. In 2015 Rabeyron, with Bem, Michael Duggan and Patrizio Tressoldi, published a meta-analysis of 90 experiments reported by 33 laboratories in 14 countries which gave astronomical overall odds against chance (p = 1.2 × 10-10). A version that used more conservative Bayesian statistics also yielded extreme evidence (Bayes factor  5.1 × 109), greatly exceeding 100 – the level of ‘decisive evidence’. The number of non-significant unpublished studies needed to nullify the outcome was found to be 544, rendering the file-drawer effect an implausible counter-explanation. They adopted a rigorous policy of soliciting non-significant studies during the retrieval stage, several of them by Rabeyron and co-workers.6 The researchers also considered that common Questionable Research Practices (QRPs), such as statistical malpractice and methodological flaws, could not explain these positive data, nor were the results confined to a few successful experimenters or labs. This review demonstrates that the original ‘Bem effect’ has been replicated.7

Rabeyron and co-authors investigated the idea of approaching exceptional experiences within a clinical context, reviewing clinical cases with paranormal features. In their Paranormal Solution Hypothesis, adults who experienced childhood abuse – but within an otherwise stable and close parental relationship – cultivate exceptional experiences in order to mitigate negative adult life experiences (a paranormal solution). The authors discuss evidence supporting this model;8 Rabeyron expands on it in a dedicated chapter in an anthology of mental health and anomalous experiences.9

In a wide-ranging 2020 publication, Rabeyron discusses the implications of parapsychological findings for the wider replication crisis in psychology.11 Rabeyron proposes that either the high calibre work of hundreds of researchers over 130 years is fraudulent and/or  the result of subject deception, or it is genuine evidence of human consciousness influencing the physical world. If the second hypothesis is correct, this creates a paradox by blurring the line between the observed and the observer, calling into question the objectivity of the scientific method. This would mean that psi phenomena could never be proved and the scientific method would be saved; thus, the paradox is restored. Rabeyron proposes a way of escaping it by embracing post-modern psychology, which takes into consideration human consciousness and the lack of true objectivity. To illustrate this new approach, Rabeyron describes recent experimental developments in parapsychology such as the correlational matrix method.