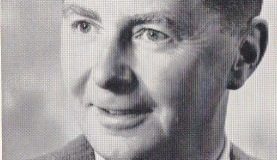 Trevor Henry Hall was born in Wakefield, England on 28 May 1910. During World War II he served as a major in the British army, then became a senior partner in V. Walker and Son chartered surveyors. He was a vice-president of the Huddersfield Building Society.

An early interest in conjuring followed a visit to Maskelyne’s Theatre of Magic in St George’s Hall, London. He became a member of the Yorkshire Magical Club and the London Magic Circle. He subsequently wrote books about Sherlock Holmes, and a bibliography of English-language books on conjuring from 1580 to 1850.1

Hall joined the Society for Psychical Research and was awarded the Perrott Studentship grant in 1954-6 to explore conditions favourable to facilitating ESP (the research was not published).2  His interest in conjuring tricks informed his sceptical view of physical mediums, many of whom had either been caught in fraud or were suspected of it. He is noted for authoring books that combine skilled detective work with speculative hypotheses to present unflattering views of mediums and psychics as fraudulent and researchers as their dupes.

Four Modern Ghosts (1958), jointly authored with EJ Dingwall, offers non-paranormal interpretations of four cases of alleged psychic phenomena: a spirit child ‘Rosalie’, a haunting in York Museum, the ‘Runcorn Poltergeist’, and the ‘Ousedale Haunt’. The authors highlight the problem of investigating cases that have been heavily publicized.3

Hall contributed four chapters to a detailed re-examination in the 1960s of the investigation by Harry Price of poltergeist phenomena at Borley Rectory, which had attracted national media attention two decades earlier.4 By Hall’s own account, he spent time there and interviewed several of the main witnesses. He also undertook an independent enquiry into the life of Mrs Marianne Foyster, one of the building’s tenants.5 The report cast doubt on the paranormality of the events, concluding that Price had presented a deliberately distorted account and might even have fraudulently contributed to the phenomena himself. (See Borley Rectory).

A later analysis by Robert Hastings cleared Price of the accusations and suggested that the report’s authors were motivated by a desire to destroy Price’s reputation.6

Florence Cook, a materialization medium then eighteen years old, was studied and endorsed as genuine by the scientist William Crookes in experimental sittings held during the 1870s. In The Spiritualists (1962), Hall presented a new view of this episode as fraudulent, a cover for a sexual relationship between the couple, drawing on a ‘confession’ alleged to have been made by Cook herself in later life.

An early review by WH Salter found some of Hall’s arguments ‘formidable’, but doubted that Crookes would carry on an affair with a teenage girl in his own house while his wife was in the late stages of pregnancy and giving birth to his child.7 Salter further pointed out that if Hall’s version of events were true, Crookes would also have been deceiving a fellow scientist, an electricity expert whom he had asked to assist him with the experiment.

Detailed objections to Hall’s thesis were laid out by RG Medhurst and KM Goldney, who concluded: ‘The book is so completely a Prosecutor’s Case that readers will find it difficult to resist the impression, rightly or wrongly, that Trevor Hall had decided in advance on a verdict of ‘Guilty’ and thereafter set out to present the facts he needed to establish this verdict.8

Edmund Gurney played a leading role in the early years of the Society for Psychical Research, with interests in hypnosis and telepathy. On a visit to Brighton in 1888, aged forty-one, he was found dead in his hotel room, from an overdose of chloroform which he was said to use for pain-relief (a coroner’s jury returned a verdict of accidental death).

In his 1964 book The Strange Case of Edmund Gurney, Hall argued that Gurney had in fact committed suicide, as a spontaneous reaction to having learned (Hall claimed) that a subject of successful telepathy experiments had in fact been deceiving him, negating a lifetime’s professional endeavor.

This speculative construction, widely cited by writers and editors unfamiliar with the facts, has been condemned by more informed commentators for its reliance on gossip and almost complete lack of supporting evidence. Alan Gauld points out that Hall’s contentions, being purely circumstantial, must be supported with the repetition of phrases like ‘significantly’, ‘of significance’, and ‘curious’, remarking that ‘he would not have to do so if the facts he is concerned with spoke for themselves’.9  Regarding Hall’s denunciation of ‘gullible’ psychical researchers, Gauld concedes that these had faults and made mistakes, but adds,

they also had considerable virtues and considerable abilities, and if they made mistakes, they also learned from them. Mr Hall, however, though quick to seize upon any point which he can turn to the discredit of the Society’s early leaders, is far less ready to note points which tell in their favour, or which counteract the criticisms he wishes to advance. Indeed his anxiety to show the Society up is so great that it leads him to be most regrettably uncritical in handling and interpreting his source material.10

Andreas Sommer comments in his assessment of Edmund Gurney for the Psi Encyclopedia, ‘In the absence of independent support, Hall’s account – hinging as it does on misrepresentation, misquotations, omissions and innuendo – should not be mistaken for serious historical scholarship.’12

Following his accusations of fraud against Harry Price in the Borley Rectory investigation, Hall published a book about the researcher that appeared bent on further damaging his public reputation (Search for Harry Price, 1978). Hall accuses Price of dishonest behaviour, notably that he gave false information about his own background.

A reviewer for The Times remarked that Hall ‘left no stone unturned or unthrown’.13  John Randall, in a later commentary in the Journal of Psychical Research, found the charges to be trivial or unjust, noting, for instance, that Hall ‘takes great delight in exposing scandalous events involving other members of the Price family, some of which occurred before Harry Price was born’. The book as a whole, Randall considered to be ‘infused with unmitigated malice’.

Although Hall never met or corresponded with Harry Price, he seems to have conceived an almost fanatical hatred for the famous ghost-hunter … Hall had a remarkable flair for ferreting out obscure pieces of information which he then inflated with masses of unbridled speculation… He went through the small details of Harry Price’s life with a fine-tooth comb, collecting everything that could be interpreted to his discredit and ignoring everything else. This portrait was not recognisable to Price's family, friends, fellow church-goers and co-workers in psychical research.14

In The Enigma of Daniel Home (1984), Hall argues that the celebrated late nineteenth century medium was fundamentally dishonest, alleging that he inflated his background to claim aristocratic connections and that he fraudulently produced the phenomena that made him famous.

The book was reviewed by Stephen Braude, an American philosopher who has contributed to the research literature of physical mediumship.  Braude criticizes Hall’s reliance on witnesses of proven unreliability and his failure to acknowledge key details that would tend to exonerate Home of charges of dishonesty, characterizing the book as ‘little more than a profusion of hearsay, innuendo, irrelevant detail, and fallacious arguments’.15

Hall was criticized by psychical researchers for never modifying or correcting his positions, even after their falsity had been pointed out. George Medhurst writes,

Though he is not reticent regarding favourable notices of his work in the general press, Mr Hall has never, so far as I know, made any reference in print to rather exhaustive, and on the whole unfavourable, analyses of his earlier books that have appeared. It seems to me to be hardly possible for an author to be regarded as a serious worker in a research field while he fails to reply to detailed and, on the face of it, damaging criticisms, and continues to address the general public as though such criticisms had never been made and his previous work were all of solid repute.16

The Spiritualists: The Story of Florence Cook and William Crookes (1962). London: Duckworth.

The Haunting of Borley Rectory: A critical survey of the evidence (1956, with E.J. Dingwall and K.M. Goldney). Proceedings of the Society for Psychical Research 51.

Hall, T.H., Dingwall, E.J., & Goldney, K.M. (1956). The Haunting of Borley Rectory: A critical survey of the evidence. Proceedings of the Society for Psychical Research 51.

Hastings, R. J. (1969). ‘An Examination of the Borley Report’. Proceedings of the Society for Psychical Research 55.

Medhurst, R.G. and Goldney, K.M. (1964). William Crookes and the Physical Phenomena of Mediumship. Proceedings of the Society for Psychical Research 54.

Salter, W.H. (1962). Review: The Spiritualists: The Story of Florence Cook and William Crookes. Journal of the Society for Psychical Research 41, 372-77.