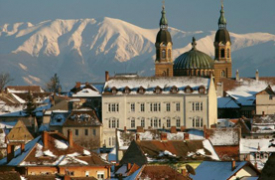 A Viennese member of the Society for Psychical Research briefly describes a case where tools and other objects are flung around a workshop, causing damage and sometimes hitting the occupants.

I had occasion to hear of a "spook" case in Vienna, and to witness some of the alleged occurrences, and I report here what I heard from witnesses, and what I saw for myself. At the beginning of this month I read in the Neues Wiener Tagblatt an account of a spook in a Vienna suburb, relating in a jocular way that things were flying about in a smith's shop, that the owner of the shop was very much put out about it, and that the communal authorities would doubtless soon put a stop to this nonsense. I was not able to go to the place for eight days; when I went there on Monday, the 16th, I heard the following account.

I will, however, first describe the locality and the inhabitants. The shop, Lerchenfelderstr. 158, is at the end of a long court in a large house inhabited by tradespeople and workmen; it is situated in the "souterrain," and one goes down to it by a short open stair and along an open area. It is the last shop on the right of the house; next to it is a shop where scales and weights are made; in the next house there is a mechanic who uses a dynamo machine. The place I refer to is hired by a man called Job Zimmerl, aged, I think, 63; he works there with two apprentices, aged about 15 and 18. He has been in this place for about four years. The workshop is very poorly furnished with old machinery, driven by hand, and rather dark. I add sketches of the situation of the shop and of its arrangements.

The man told me that he was very much disturbed by things - tools, bits of iron, screws, his pipe, etc.- being thrown off the benches and flung about; he had a stiff hat on so as to protect his head against the objects; he showed me a lump on the back of his head, caused, as he said, by a piece of iron; one of the boys had a red spot on his cheek bone, caused in a similar way. He told me that he did not think his apprentices could have played him tricks, as he had watched them, and as objects had been flying about while they were outside, and from a direction opposite to where they stood, and where there was only solid wall. He had been to the police, and some officials had been there to examine the walls, etc., but had found nothing unusual, the walls, etc., being solid and in good order.

While I was there an electrician came to examine the place with instruments of precision, as it was thought that the neighbour's dynamo might have caused currents; he found nothing at all, there were no electric or magnetic reactions whatever. I was there for about an hour, but saw nothing myself, though earlier in the day a wooden model was said to have flown across the room from its place high up on a wall; the hook from which it had hung was there still, and the string on which it had hung was intact.

I went there after a few days again. I found that all the tools had been removed from the shop into wooden boxes and put outside, the man being afraid to work while they were lying loose; he told me that a rather heavy hammer had whirled close past his head several times; he was much scared, and lamented the loss of his time and the loss of customers, as some would not come near, being frightened, while others kept away "from an old fool who talks such nonsense."

Since my last visit some spiritists had "sat" with the boys at night, and some phenomena seem to have occurred. I have not had occasion to look them up yet, but mean to do so ; some other spiritist had brought " writing mediums," the result being uninteresting. The phenomena had increased, according to Z. and the boys' accounts. They had seen a pipe fly from one side of the shop to the other and back, and settle on the anvil in the middle of the room; once the pipe was taken from Z.'s mouth and fluttered on to the turning lathe ; once it got up by itself from a lying into a standing position on its clay head (it consists, as is customary here, of a long wooden stem with a clay head), and then made a vicious "peck" and broke its head. Z. had by this time given up smoking in the shop on account of so many pipes having been broken. His notebook was said to have flown out of the window "like a butterfly," and the hat of one of the boys had been removed from his head repeatedly. I remained there for about a couple of hours, but saw nothing; I spoke to several neighbours, who affirmed they had seen or heard things fly about.

I came again next day - Saturday last - determined to remain for the whole day. When I arrived, about 8.30, Z. was just returning from some newspaper offices, where he had been to fetch reporters ; he also brought a policeman with him. He was quite beside himself, two petroleum lamps having been smashed during the night, and by then seven window panes broken; moreover, all his tools were mixed up; he dared not go into his shop, and raved about the authorities not being able to stop such impossible goings on, and not protecting him, letting him be ruined, etc., etc. Several newspaper reporters had arrived by this time, and we watched all the morning without seeing anything, till 12, when the shop was closed.

(A) [We designate the various incidents by letters, to facilitate reference to the further descriptions of the same given in Mr. Warndorfer's later reports below.] On the evening before an open round tin box containing plaster of Paris was said to have been thrown on to the ceiling and then trailed on the floor ; I noticed the marking on the blackened ceiling as peculiar; it was in shape like a comet, with a nucleus and a tail; all the particles were quite round, and I cannot conceive of any means to produce such a marking without showing some trace of "wiping along." If it had been blown on or put on with a brush, or thrown on in the ordinary way, some of the plaster particles would undoubtedly have scraped along and formed lines or smears. When I returned in the afternoon on the shop being opened, I saw at once that the white mark was altered; part of the " tail " looked as if a soft brush had been passed over it ; I think that the mark altered its shape during the afternoon as well, but I am not quite sure about it.

I arrived there at 1.10 and found the boys just opening the place and carrying the boxes with tools outside; shortly afterwards Z. arrived and started some job that he had to finish at once. During the next three hours I saw, heard, or felt exactly 30 objects being thrown about. With about 12 or 15 objects I am perfectly certain that none of the persons present can have thrown them. (B) One of them was thrown when I was momentarily alone in the shop, coming apparently from the smithy. I never saw any of the objects actually fly; with most of them I heard only the fall, with some I heard a slight noise, indicating the direction from which they came. Some dropped quite close to me, three struck me on the head.

(C) The first phenomenon that I witnessed there was a piece of iron about the size of a walnut touching me quite lightly on the top of my felt hat, and from there dropping on the floor; I didn't know at first what it was that touched me. The middle (top) part of my hat was folded in, almost touching the top of my head. The piece of iron must have jumped out again, as otherwise it could not have fallen on to the ground.

(D and E) Later on I was struck by a small blade of steel on the back of the neck, and the third time by a fragment of a clay pipe; this and some other small pieces which flew about I had deposited on a wooden shelf on the wall, where they were well out of the reach of the boys' ordinary manipulation. There were several people present, watching through the window and standing in the doorway, but I do not think any of them can be connected with the phenomenon. The more people came, the scarcer they grew.

(F) The last happened at about 4.30. The smith had gone out of the shop soon after the "spook" began, lamenting his fate, and finding evidently some consolation in the curiosity of the neighbours to hear the latest developments. I stood most of the time in the middle of the shop, keeping my eyes on the boys, my back turned to the smithy. About 4.30 I watched the boys drilling a hole in a piece of iron, their hands and evidently their attention being fully occupied. Suddenly the younger of the two screamed out and was nearly bent double with pain and fright, while an iron measuring instrument flew on to the floor; it had struck him pretty sharply on the left temple, causing a swelling and a drop of blood. I had noticed the instrument a little time before lying on the workbench, about a yard behind the boy.

The objects that flew about in my presence were mostly light, their weight never exceeding about 1lb. I have read up most of the cases mentioned in your Proceedings, and do not think I was in any way careless in my observations. I shall get back to Vienna tomorrow and visit the place again on Monday, and let you know if anything further has occurred.

P.S. I forgot to mention that it was found out by one of the reporters that at the beginning of this year a man who lived in a small room just above the shop with his parents, complained about his furniture being moved about, an ink-bottle being spilt (the same happened in the shop, Z.'s hat and shirt being covered with ink), the door of his cupboard being thrown open suddenly, etc. His parents thought he had gone mad, and did not attach any importance to his words. He left the room about March, and from that time up to the beginning of this month nothing has happened.