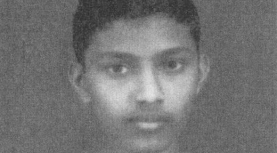 In this Sri Lankan reincarnation case, a boy born with serious physical defects believed they were inflicted on him as karmic punishment for having committed murder in his previous life.

Wijeratne Hami was born on 17 January 1947 in the Sri Lankan village of Uggalkaltota. At his birth his parents noticed that his right arm and hand were deformed and that part of his right pectoral muscle was missing.  His father, Tileratne Hami, noticed resemblances to his deceased younger brother, Ratran Hami, in particular a darker complexion than other people in the family, similar to Ratran, and said, ‘This is my brother come back’.

At the age of two, Wijeratne began to talk to himself while walking alone round the house. His mother said she heard him say that his arm was deformed because he had his murdered his wife in his previous life and mention details of a crime, trial and execution with which she was unfamiliar. Tileratne confirmed that the details matched the final events of Ratran’s life, including his execution by hanging. He said Wijeratne described vividly (although in a fragmented way) the crime, trial and execution.

Born in 1904, Ratran married young but his wife died when he was 22. He courted another young woman, Podi Menike, from a village about eight kilometres away. She agreed to marry him and the legal documents were drawn up and signed, while she continued to live with her parents pending the final ceremony and feast, as is standard practice in Sinhalese marriages. However, when Ratran journeyed to her village for the ceremony, she refused to go through with it, possibly because she had become attracted to another young man.1

Enraged, Ratran returned to Uggalkaltota, sharpened his kris (Malaysian knife), returned to Podi Menike’s village and stabbed her to death. The crime happened on 14 October 1927.2

At the trial, Ratran pleaded not guilty, claiming there had been a scuffle between him and people in the village, and that he had been beaten by a friend of Podi Menike while she restrained him. In trying to escape her grip, he claimed, he happened to stab her, but had never intended to kill her. The jury believed other witnesses who asserted that he had assaulted her with the knife and only then had they intervened.

Ratran Hami was hanged in July 1928. According to Tileratne, he had said, ‘I am not afraid. I know that I will have to die. I am only worried about you’, and told Tileratne he would return as his son.

Tileratne was unmarried at that time. In 1936, he married Huratal Hami of the village Morahala, about forty kilometres distant from Uggalkaltota. She later reported that she had not heard of the crime until her son Wijeratne began talking about it.

In his report of the case, Ian Stevenson noted that the two villages were far apart with almost no traffic between them, also that murders in Sri Lanka at that time were so common that news of them did not travel widely. His informants said the news had not reached Morahala, and it was likely that Tileratne avoided the topic while courting her.3

When Wijeratne was nearing the age of five, a Buddhist philosophy professor, Ananda Maitreya, learned about his apparent memories and interviewed him.  At fourteen, Wijeratne was interviewed by Francis Story, one of Stevenson’s research assistants in Sri Lanka. Story also interviewed the principal and teachers at Wijeratne’s school, and monks who had witnessed his earlier statements. Four months later, alerted by Story, Stevenson interviewed and physically examined Wijeratne, then interviewed Wijeratne’s parents and older brother; he also obtained the details gathered earlier by Maitreya. In addition, Stevenson acquired a certified transcript of Ratran Hami’s trial, an autopsy report for Podi Menike, and other documents. He stayed in touch with Wijeratne and his family through visits and correspondence for about thirty years.

Stevenson published a full report in his book Twenty Cases Suggestive of Reincarnation4 and a summary report with photographs in the second volume of his two-volume work, Reincarnation and Biology: A Contribution to the Etiology of Birthmarks and Birth Defects.5 He notes that he investigated three other cases in which a birth defect was said to have resulted from wrongdoing in the previous life.6

When Stevenson examined Wijeratne at age fourteen, the boy’s right arm was six to seven centimetres shorter than the left and about half the thickness. His right pectoral muscle was almost entirely missing. An x-ray taken years later showed his right third rib was shorter than the left. The fingers of his right hand were much shorter and smaller than normal, and the index, middle and ring fingers were joined together, with some joining between the ring and fourth finger as well. The hand was limited in ability to grasp objects larger than a pen or pencil.7 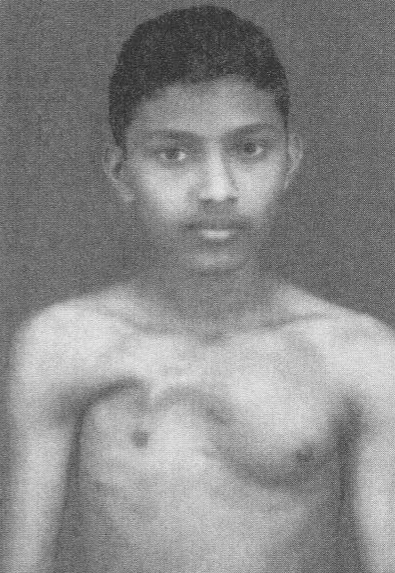 Left, fig. 1: Wijeratne as he appeared at age eighteen. Note the relative shortness of his right arm. 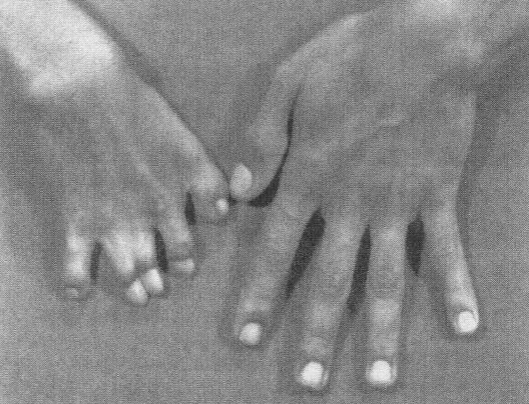 Fig. 3: Wijeratne’s right hand as it looked when he was fourteen.

These malformations in combination comprise a condition known as Poland syndrome. It is rare, with an incidence of about 1 in 20,000. No other members of Wijeratne’s family had such a defect, according to him.9

Wijeratne’s own explanation was that he had killed his wife with his right hand. He also said that the muscle in his right chest was missing because he had stabbed Podi Menike in the right breast and the deformity was reflective of her wound. But the post-mortem report showed that he actually stabbed her in the back and left armpit.

Stevenson speculated that he might have confused right and left, seeing her left as ‘right’ since her left was on his right, writing, ‘Then, supposing that mental images, rather than physical changes, govern changes in the physical organism of the person holding the images, and supposing an influence on the body of Wijeratne by the mind of Ratran Hami, we could account for a deformity on the right chest of Wijeratne’.10

In 1971, aged 24, Wijeratne underwent successful surgery to separate the index and fourth fingers from the adjoining fingers, greatly increasing the hand’s functionality.11

Wijeratne made the following statements that were verified either by his family members, close associates or the trial transcript:

About these statements, Stevenson admits that most information in them was known to Tileratne, so that Wijeratne could have learned it from his father. Stevenson points out, however, that it had to have been very early in life, as Wijeratne’s mother reported that he told the story in detail at the age of two and a half. Stevenson further contends that the father could not have conveyed to his son the information about Ratran, his crime and execution without the mother finding out, as Sri Lankan mothers keep such young children close to them always.

Additionally, the boy made three statements related to his execution that Tileratne had not been present to witness, including the matter of the rope being tested with a sandbag, which Stevenson was only able to verify by asking a prison executioner. Stevenson also noted that Wijeratne could not have recognized the belt his cousin was wearing through information from his father or anyone else in his immediate family.

Stevenson argues that fraud for reasons of renown or financial reward is implausible in this case as it was more likely to bring notoriety: in fact Tileratne had tried to discourage his son from talking about his past life out of fear of retaliation by surviving kin of Podi Menike and derision from others. He also notes that Sri Lankan villagers tend to revere monks, and suggests the family would never have revealed the story to them unless they were convinced it was true.

Stevenson also explains that where Wijeratne’s account differs from that of witnesses and the accused at the trial, he credits the boy’s account, because, other than the medical officer who performed the autopsy, the witnesses ‘were all deeply concerned either with sending him to the gallows or preserving him from it’.13 Wijeratne’s confession to Ratran having purposely stabbed Podi Menike suggests he lied on the stand in an attempt to save his own life. This discrepancy, Stevenson contends, also rules out the explanation of Wijeratne having derived his knowledge either psychically or by normal means from his parents or the court records, as he surely would have repeated the same story.

Personalities of Ratran and Wijeratne

Tileratne said only that his brother Ratran was ‘very obedient’, a trait he said he noticed in Wijeratne as well. At the age of fourteen, Wijeratne showed no remorse for the murder, and in fact – even though he considered both the hanging and the birth defect in his subsequent life as just – said he would likely do the same again in the same situation, as that was correct for a husband who had been rejected in this way. (Stevenson observes that this attitude was not unusual in Sri Lanka at the time, contributing to the high homicide rate.) However, Wijeratne also said, ‘I had an unbearable temper at the time. I did not think of the punishment I would get’,14 and stated that his temper was milder in his current life.

By staying in touch with Wijeratne for three decades, Stevenson was able to follow the course of his growing up and young adulthood.

In his early twenties, Wijeratne said that he no longer thought about his previous life unless reminded, but when he did think about it, the memories of the murder, trial and execution were more vivid to him than memories of his current-life childhood.

Greater maturity brought a softening of his position on murder as a solution to a wife’s unfaithfulness, as he wrote to Stevenson at the age of 22: ‘If, however, a wife disregards her husband’s advice, it is wise to divorce her. Or else the sudden anger that can arise in a person can lead to the destruction of many lives. Thus, according to Buddha’s teaching, if one’s actions are guided by patience and wisdom, it can lead to a happy life’.15

That same year, Wijeratne suffered an attack of schizophrenia lasting some five months. He spent a month in a psychiatric hospital and was on medication for some time after discharge, according to the notes of the attending psychiatrist, who shared all information with Stevenson. The illness was apparently precipitated by the rebuffing of Wijeratne by a female school classmate, about whom he had constructed elaborate romantic fantasies. Though he denied it, classmates said that he had told them she reminded him of Podi Menike. Four years later he suffered another psychotic break that landed him in psychiatric hospital for a short time, again caused by a woman’s rejection.

In 1980, Wijeratne Hami finally found a woman who loved him, and they married that year. After graduating from university, he began working as a schoolteacher. He did not mention his memories of the life of Ratran Hami before the marriage, and although his wife learned about them later this did not seem to change their relationship.

Stevenson, I. (1997). Reincarnation and Biology: A Contribution to the Etiology of Birthmarks and Birth Defects. Volume 2: Birth Defects and Other Anomalies. Westport, Connecticut, USA: Praeger.