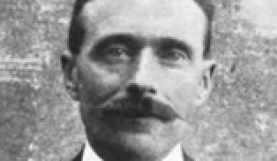 William Crawford (1881-1920), a college lecturer in mechanical engineering, is known for his investigation of paranormal phenomena produced by a Spiritualist circle in Belfast.

William Jackson Crawford was born on 28 February 1881 in Dunedin, New Zealand. He moved to the UK in 1899 and gained a bachelor’s degree and PhD from the University of Glasgow. He lectured in mechanical engineering at Queen’s University, Belfast from 1912 and published works in that subject.

Shortly after he arrived in Belfast, he began a four-year investigation of psychokinetic phenomena reported to occur in a Spiritualist circle. He described these in articles in the Spiritualist periodical Light and in three books: The Reality of Psychic Phenomena (1916), Experiments in Psychical Science (1919), and  The Psychic Structures in the Goligher Circle (1921).

In 1914, Crawford attended a sitting with Marthe Beraud (also known as ‘Eva C’), a materialization medium who had been extensively studied in Germany by Albert Schrenck-Nötzing.1  This sitting was unsuccessful. However, later that year Crawford began to work with a Belfast spiritualist circle and reported having witnessed strong physical phenomena.

Crawford committed suicide on July 30 1920 at the age of thirty-nine. His body was found on Pickie Rocks, Bangor; a coronor's report stated that he died by cyanide poisoning.2 Before he died, Crawford sent a letter to David Gow, the editor of the periodical Light, which had published some of his reports, explaining that his collapse was due entirely to overwork:

My psychic work was all done before the collapse, and is the most perfect work I have done in my life. Everything connected with it is absolutely correct, and will bear every scrutiny. It was done when my brain was working perfectly, and it could not be responsible for what has occurred…  I wish to reaffirm my belief that the grave does not finish all.3

The Goligher Circle, as it became known, consisted of seven members of the Goligher family in Belfast, all dedicated Spiritualists.4 The famuily held séances in the family home and in Crawford’s own rooms, sitting around a table with red light for illumination. Kathleen Goligher, aged sixteen, appeared to be the main focus of the phenomena, which was shared to a lesser extent by her four sisters. The phenomena reported by Crawford included raps and levitations of the table and household objects.

Crawford attended eighty-seven sittings over two-and-a-half years with the family, convinced that the occurrences were not caused by normal means by any of the people present.5  The author of a later assessment of his work wrote:

He had satisfied himself that none of the sitters were physically responsible for the levitations. That is to say, none of them were touching the table. They sat in a circle round it, holding hands or with their hands on their knees. The light was sufficiently good for Crawford not only to be able to verify this, but also to verify that their feet did not touch the table, with one exception. It was difficult to see the feet of the medium which were in shadow, but it seemed impossible that any movement of her feet could be responsible for the remarkable movements of the table; and many subsequent experiments showed this to be the truth.6

Visitors to the sittings testified emphatically both to the strength of the phenomena and to the impossibility that these were caused by fraudulent activity (see here).

Experiments convinced Crawford of the existence of protuberances or ‘rods’, which were made of some psychic stuff that emanated from Kathleen Goligher’s body and extended to different parts of the room.7  He elaborated on this in his second and third books, of which the latter includes diagrams and photographs.

I hold strongly to the opinion that if the processes resulting in the application of psychic force are once really discovered, then the rest of psychic phenomena will rapidly fall into place and be understandable. Psychic energy —as evidenced in good physical séances—is at the root of the whole thing, and it is useless to expect any great advance until its laws have been unravelled.8

In the year following Crawford’s death, an investigation carried out by EE Fournier d’Albe attempted to verify his findings. After twenty sittings Fournier d’Albe concluded that the levitations had been accomplished by the use of the medium’s legs and that other manifestations were fraudulently produced.9

These negative findings, combined with the extravagant nature of Crawford’s claims, led to rejection of his books by sceptic commentators.10 Some writers have linked his death to his research, insinuating – against Crawford’s own statements and other indications – that he killed himself because he feared the Golighers would be exposed as frauds.11

In the ensuring controversy, some psychical researchers accepted Fournier d’Albe’s findings while others criticized him for providing insufficient information and for failing to take measures which would have decided the matter more clearly.12

More details about the Goligher Circle and Crawford’s investigations can be found here.

Hints and Observations for Those Investigating the Phenomena of Spiritualism (1918). New York: E. P. Dutton & Co.

Brandon, R. (1983). The Spiritualists: The Passion for the Occult in the Nineteenth and Twentieth Centuries. London: Weidenfeld and Nicolson.

Dingwall, E.J. (1921). Review: The Psychic Structures in the Goligher Circle. Proceedings of the Society for Psychical Research 32, 147-50.