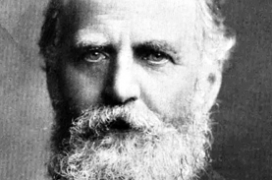 William Thomas Stead (1849-1912) was a journalist, author, social reformer and medium.  His books include Real Ghost Stories (1891), a collection of reports of psychic experiences, and Letters from Julia (1909), based on his automatic writing.  A passenger on the Titanic, Stead was widely reported to have communicated at séances in the months following his death.

William Thomas Stead was born July 5, 1849 in Embleton in the north of England, the son of a Congregationalist clergyman. He was educated at Silcoates School, Wakefield.  He left school in 1863 and worked as an office boy in a merchant’s counting house on Quayside, Newcastle-on-Tyne. He later said that the poems of James Russell Lowell played an important part in shaping his life’s work, which, he decided – around age 18 – was to help other people.

Stead’s career as a journalist and author began in 1867 when he joined the the Northern Echo as a junior reporter, becoming editor in 1871.  In 1880, he accepted a position as assistant editor of the Pall Mall Gazette and was appointed editor in 1883.  In 1890, he founded the Review of Reviews.  Stead has been credited with inventing popular journalism, covering important topics in bright, colorful prose for the man in the street.  He introduced the interview technique to British journalism and pioneered cheap reprints for mass sale in the form of penny pamphlets.1

In an 1886 article for The Pall Mall Gazette, Stead described the sinking of ship following a collision with another ship, and the massive loss of life that resulted from the lack of sufficient lifeboats. He returned to the theme in his 1892 novel From the Old World to the New, in which a passenger ship called the Majestic, captained by an Edward J. Smith, sinks in the North Atlantic after hitting an iceberg. Stead himself drowned in April 1912, a victim of the sinking of the Titanic, captained by Edward J. Smith.

No man ever lived a more strenuous life, or one more devoted to the welfare of his fellow-creatures, and this perhaps led him to a too great indifference for his own mundane interests. His heart and his purse were ever open to those who came to him in difficulties and distress, for counsel and relief.2

Stead’s interest in the paranormal began during his early twenties when he experienced ghostly phenomena on a visit to Hermitage Castle in the border region of Scotland. His collection of paranormal stories in the following years led the publication of Real Ghost Stories in 1891 and More Ghost Stories the following year. The two volumes were published as one volume in 1897, as Real Ghost Stories, and later as Borderland: A Casebook of True Supernatural Stories.

Stead often wrote about supernatural phenomena, and in 1892 became more directly in mediumship, when he observed one of his office employees doing automatic writing, apparently in touch with discarnate spirits.   One of this told Stead that he too had the ability to do automatic writing; however, Stead was sceptical and his initial attempts were unsuccessful.  Later that same year, he made another attempt. This time, he found himself writing statements purportedly originating with Julia Ames, an American journalist who had died in 1891, shortly after interviewing Stead.  Julia stated that the ‘letters’ were for a mutual friend, referred to by Stead as ‘Ellen’.

Stead wondered if his subconscious had been playing tricks on him and asked ‘Julia’ to provide proof in the form of a test.  She told him to ask Ellen what she and Julia had talked about in their last conversation.  Stead’s hand then wrote ‘MINERVA’.  Stead asked if that was a place, and his hand wrote ‘No’. Was it a person, perhaps Minerva the heathen goddess?  Julia replied, ‘Yes’, adding that Ellen would understand. Stead saw Ellen later that day and was told that she and Julia had discussed the emergence in America of the Woman’s Christian Temperance Union. Julia had likened the movement to ‘the Minerva who sprang full grown from the temples of Jupiter’, and suggested they call Miss Willard, the president of the organization, Minerva.  Julia subsequently presented Willard with a cameo brooch of Minerva.3  ‘Julia’ also described an incident in which, in Ellen’s presence, she had tripped over in the street, hurting her back. These facts were confirmed by Ellen.

In the introduction to Letters from Julia Stead wrote:

Automatic writing, I may explain for those unfamiliar with the term, is writing that is written by the hand of a person which is not under control of his conscious mind.  The hand apparently writes of itself, the person to whom the hand belongs having no knowledge of what it is about to write.  It is a very familiar and simple form of mediumship, which in no way impairs the writer’s faculties or places his personality under the control of any other intelligence.  This writing may proceed from his sub-conscious mind, or it may be due to the direct action of independent, invisible intelligences. What is certain is that it does not emanate from the conscious mind of the writer, who often receives messages containing information as to past events of which he has never heard, and sometimes perfectly accurate predictions as to events which have not yet happened.4

Stead’s interest in the paranormal, combined with his new facility for automatic writing, led to the launch of Borderland, a quarterly review dedicated to exploring psychical matters.  While he seems to have appreciated the efforts of the Society for Psychical Research in this regard, he, like William Stainton Moses, a founding member of the SPR, felt that the SPR was overly scientific in its research and conclusions.  In a public talk given in 1909, three years before the sinking of the Titanic, he drew an imaginary picture of himself as the victim of a shipwreck, calling frantically for help.  When rescuers spotted him, they asked him to identify himself before they would throw him a rope.  ‘I am Stead, W. T. Stead! I am drowning here in the sea!  Throw me the rope.  Be quick!’ But the rescuers continued to ask for proof that he was WT Stead, requesting details about his life.  ‘Well, that is pretty typical of the ‘help’ given by the S.P.R. to the friends who are trying to make us hear them from the Other Side!’ Stead concluded.5

The publication lasted four years, its final issue appearing in October 1897.  ‘Progress has been made, but not so much as we hoped for,’ Stead explained at its demise, adding that ‘the chief lesson I have learned has been a better realisation of the extreme complexity of the so-called supernatural phenomena, and the absolute impossibility of explaining them by any single hypothesis’.6 However by this time, Stead was dedicating much of his time to making it known that man survives death.  He wrote:

Belief is one thing. Certitude is another.  What we have to do is prove what is the fact so clearly that, as Mr. Minot Savage says, ‘to doubt it would be an impeachment of man’s intelligence’.  It may be that we may fail in proving what we hope to be able to demonstrate.  But the attempt may not be less fruitful on that account.

Stead further opined that humans are only ‘half alive’, and that we can become fully alive by understanding more of the latent powers within ourselves and accepting the survival of consciousness.7

Letters from Julia (later renamed After Death or Letters from Julia) set forth communications that Stead believed the deceased Julia had written through his hand.  They dealt primarily with afterlife conditions, beginning with Julia’s first awareness after death, her awakening, her orientation in the afterlife, the nature of the afterlife, and various lessons she had learned in her new environment.  Stead wrote:

I feel it is impossible to resist the conclusion that these communications are what they profess to be – real letters from the real Julia, who is not dead but gone before. I know after five years’ almost daily intercourse with her through my automatic hand, that I am conversing with an intelligence at least as keen as my own, a personality as distinctly defined and a friend as true and tender as I have ever known.8

Stead further stated that he could hardly imagine that any part of his unconscious self would deliberately practice a hoax upon his conscious self about the most serious of all subjects, and keep it up year after year with so much sincerity and consistency.

Also during 1909, at the communicator’s urging, Stead formed ‘Julia’s Bureau’, a private organization the focus of which was to ‘abolish the conception of death which now prevails in the world’,9 offering sittings with competent mediums for those grieving the loss of a loved one.  According to Estelle Stead, Stead’s daughter, more than 600 persons received help and consolation during the three years of its existence, its cessation resulting from the death of its leader.

When he died, Stead was on his way to New York City to give a lecture on world peace at a conference at Carnegie Hall.  A survivor reported seeing Stead calmly sitting in the smoking room reading a book, while other passengers scurried to the decks and the lifeboats.  Another recalled seeing Stead calmly holding back men who were attempting to board the lifeboats with the women and children.  Still another recalled seeing him standing alone in silence, in what appeared to her as a prayerful attitude, or one of profound meditation.

On the return trip, Stead had planned to chaperon Etta Wriedt, an American trance-voice medium who was travelling to England to be studied by members of Julia’s Bureau.  Wriedt made the trip without him, and gave a sitting on May 6 in Wimbledon. Among the sitters were British Vice-Admiral W Usborne Moore and Estelle, Stead’s daughter. Moore reported that Stead communicated with his daughter for at least forty minutes. He recalled:

I could not help hearing every word. It was the most painful and at the same time the most realistic, convincing conversation I have ever heard during my investigations.10

General Sir Alfred E Turner reported that he held a small and private sitting at his home with Wriedt:

We had hardly commenced when a voice, which apparently came from behind my right shoulder, exclaimed:  “I am so happy to be with you again.”  The voice was unmistakably that of Stead, who immediately began to tell us the events of the dire moments when the leviathan settled down. There was a short, sharp struggle to gain his breath and immediately afterwards he came to his senses in another stage of existence.11 At a later sitting with Wriedt, Turner saw Stead materialize, wearing his usual attire.

Mr. Stead showed himself twice within a short time, the last appearance being clearly defined, and none will readily forget the clear, ringing tones of his voice. There in our own home, and in the presence of fourteen sane and thoughtful people, Mr. Stead has manifested and proved in his own person that the dead do return.12

Coates collected testimony from many others who witnessed the return of Stead, documenting them in a 1913 book, Has W. T. Stead Returned?