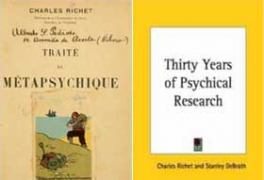 Published in 1922, the Traité de Métapsychique is the best-known psychical research work by Charles Richet, the French Nobel-prize-winning physiologist. Its purpose was to present an overview of psychical research, a field Richet called ‘metapsychics’. An English translation of the second edition was titled Thirty Years of Psychical Research.1

In the preface Richet warns readers not to expect abstract discussions about ‘man’s destiny, about magic, about theosophy’2 His remit is to present observations while avoiding theories. The Traité is then organized in four sections, starting with an overview in which metapsychics is defined as ‘a science which object is phenomena, mechanical or psychological, due to seemingly intelligent forces or to unknown latent powers in human intelligence’.3 In the first section, ‘On Metapsychics in General,’ Richet classifies the phenomena of the field as subjective and objective, referring to the well-known distinction of mental and physical phenomena. There is also a discussion of the historical development of metapsychics, divided into four periods: a mythical period (from antiquity to Mesmer), a magnetic period (ranging from Mesmer to the beginning of Spiritualism and the Fox sisters), and a scientific period said to have started with William Crookes. Richet states that a fifth period might start with the Traité.

Although Richet saw the scientific period as the culmination of past work, he was clear in acknowledging the debt the field owed to the mesmerists and the spiritists, whose work  ‘contributed to the founding of metapsychics’.4 He also affirmed that in his view there was no metapsychics without a medium: even if Leonora Piper and Eusapia Palladino were the only mediums who ever existed, these women would suffice to establish subjective and objective phenomena, respectively.

The second part of the book, devoted to ‘subjective metapsychics’,  starts with a discussion of conventional explanations based on the capabilities of the subconscious mind, as opposed to veridical phenomena such as telepathy. The first includes personation, automatisms, and what he calls ‘pantomnesia’, a term referring to access of all the recollections of the individual. In his view, ‘to separate the psychic [psychological] from the metapsychic, we adopt the following criterion: Everything that may be done by human intelligence, even the very profound and skillful, is psychic. Everything a human intelligence cannot do… would be metapsychic.’5

There are also discussions about chance and various errors involved in observation. Richet is concerned to present a critical approach to the study of psychic phenomena and to show readers that psychical researchers are aware of the conventional explanations for their phenomena.

In the section ‘On Subjective Metapsychics,’ Richet discusses what he refers to as ‘cryptesthesia,’ a ‘hidden sensibility, a perception of things, unknown regarding its mechanisms, and of which we cannot know but its effects’.6 He presents many examples of this phenomenon, both spontaneous and experimental. They include observations of psychics and mediums, among them Gladys Osborne Leonard, ‘Léonie’, Leonora  Piper, Hélène Smith, and Stephan Ossowiecki. Richet reports some tests with a non-professional psychic named Alice, of which several involved accurate descriptions of targets inside envelopes. He classifies spontaneous cryptesthesia as monitions referring to serious and non-serious events that are not death-related, but also includes death-related experiences and collective experiences. The phenomenon was believed to show no time or space limitations, but this did not imply acceptance of  discarnate agencies as a cause.

There are also observations for which Richet attempts to calculate a probability value to assess chance in cryptesthesia. Regarding the latter, he writes:

Thus let us conclude that, through the tests in which the calculation may apply, lucidity, or the transmission of thought exists… In other words, in almost all men, even the least sensitive in appearance, there exists a faculty of knowledge other than the usual faculties of knowledge. But in the non-sensitive, this faculty of knowledge is extremely weak, almost negligible.7

There is a discussion of dowsing, the metapsychic perceptions of animals, and premonitions. In addition to personal premonitions of disease and death, he lists cases of ‘proper’ premonition such as those taking place in hypnotized subjects, in mediums, in ‘accidental’ or spontaneous premonitions, and in various other topics.

In the third section, ‘On Objective Metapsychics,’ Richet discusses telekinesis, materializations, levitation, bilocation, and hauntings (with which he includes poltergeists). He does not accept the objective reality of bilocations (by which he means the physical appearance of a semblance of the human body), interpreting the phenomenon instead as a form of cryptesthesia.

Richet pays much attention to physical mediumship, both telekinesis and the materializations of such mediums as Marthe Béraud, Florence Cook, Linda Gazzera, DD Home, Eusapia Palladino, Stanislawa Tomczyk, and many others. Richet says he was present during some of Tomczyk’s telekinetic performances, which he found conclusive, as was also the case for Palladino and other mediums. He makes original observations about materializations with Béraud, recording them in unpublished notes written in 1906. Of one such, he writes:

Rather good light. The curtain remains closed for about an hour. Then I opened it; a white spot, like cloth on the ground, grows rapidly, there is a formation of two horns in the path of the mass X which emits very mobile horns in all directions. The mass X… slowly breaks down, into particles, which give it the appearance of a hand… this is a grayish hand of vague contours. This hand is animated with movements, it looks like the hand of a mummy coming out of fabric.8

The mass made many movements, as if it was alive, he adds.

In the conclusion, Richet restates his belief in the existence of the above mentioned phenomena:

1. there is in us a faculty of knowledge that is absolutely different from our common sensory faculties of knowledge (cryptesthesia); 2. movement of objects without contact are produced, even in plain light (telekinesis); 3. there are hands, bodies, objects, that appear to be formed completely from a cloud and show all the appearances of life (ectoplasmy); 4. there are presentiments that neither perspicacity nor chance can explain, and sometimes they are verified to their smallest details.9

Richet repeats that theories are premature in metapsychics, insisting that, at the present time (1922), a truly general explanation to account for metapsychic phenomena is still lacking. He is unconvinced by the spiritist explanation, calling it ‘manifestly absurd’ in many cases: ‘Absurd because it is useless. Absurd because it assumes human beings, of very mediocre intelligence, survive the destruction of the brain’.10 Still, he reluctantly admits that some cases suggest the action of a foreign intelligence (an issue he came back to frequently – see Charles Richet).

However, Richet is not as atheoretical in the book as he makes out. He certainly is positive about the idea that human processes (such as personation) and metapsychic ones (such as cryptesthesia) could, at least in principle, account for some phenomena, stating that ‘the human person has resources that we do not know, both physical and psychological’.11 He goes on to speculate that:

Materialization is a mechanical projection… Is it not a very long way to consider possible, other than projections of heat, light, and electricity, a projection of a mechanical force? The memorable demonstrations of Einstein establish to what extent mechanical energy is similar to luminous energy’.12

Finally, Richet argues for the need to conduct more research, writing, ‘then Metapsychics will come out of Occultism, as Chemistry was separated from Alchemy’.13 Regardless of difficulties, he hopes the work would go on: ‘The task is so beautiful that, even if we fail, the honor of having undertaken it gives some value to life.’14

The Traité became Richet’s personal manifesto and, perhaps because of his scientific prestige, was very influential, particularly in France, where it was generally cited as representing the field at large. It presented metapsychics as a scientific field, one that had its history, methods, terminology, and database of findings. (At its publication he presented it to the Académie des Sciences.15) Nonetheless, here as in later publications,16 he acknowledged the field was still in initial stages of development.

The book also received much attention in overviews of psychical research, although this commentary was sometimes negative in character, as seen in some of the critiques of Ernesto Bozzano17 Pierre Janet18and Oliver Lodge.19 For example, the latter pointed out that Richet used too many secondary sources as opposed to primary ones such as SPR publications, and that his speculations against survival explanations were too vague and embedded in materialistic philosophy.

The Traité is arguably still of great value, presenting a number of useful references in the period up to 1921, and effectively summarizing for modern readers areas of study from the old days of psychical research.